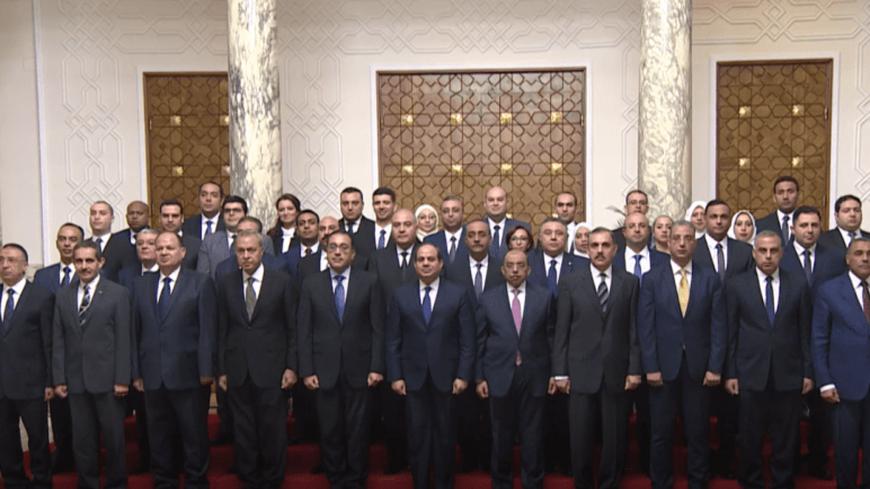 A correspondent in Egypt
December 3, 2019

CAIRO — Egyptian President Abdel Fattah al-Sisi recently appointed a slate of new governors and deputies that is weighted with police and military leaders at the expense of civilians. The appointments come as parliament is expecting a Cabinet reshuffle.

Of the 16 new governors sworn in Nov. 27, 11 have military or security backgrounds. These military and police lieutenant generals have taken over management of the coastal provinces on the Red Sea and Mediterranean Sea, namely Alexandria, Marsa Matruh and Ismailia, as well as three Nile Delta and northern provinces. Five lieutenant generals will command the Upper Egypt provinces, which have a history of sectarian violence, most notably Minya.

This is not the first time that members of the police and army have made up the majority of the appointed governors. Police and army lieutenant generals, including two former senior commanders of the armed forces, accounted for 19 out of the 27 governors appointed in August 2018.

The 23 newly appointed deputy governors are all young graduates from the National Training Academy and the Presidential Leadership Program — which Sisi established to produce the so-called political "young cadres."

The Presidential Leadership Program is run in coordination with a number of state and civil society bodies to groom young people for leadership roles in politics and administration, according to the program's website. The program, which is under Sisi's direct management, was financed by the Long Live Egypt Fund, which obtains donations for the benefit of the state and its projects.

Sisi also leads the training academy's board of trustees, assisted by a number of ministers. The security services supervise student admissions.

Egypt Youth Party Chairman Ahmed Abdul Hadi defended the appointment of military and police lieutenant generals to manage the affairs of the majority of the Egyptian provinces.

Abdul Hadi told Al-Monitor, “Security leaders, be they in the police or army, have proved capable of managing the governates so well. The governates' military and police members have proved successful in resolving citizens’ problems.”

He added, "There should be full trust in the choices the Egyptian regime and Sisi’s government make at present, because it is at these times that Egypt is countering terrorism, violence and sectarianism,. We only need to work and trust the political leadership instead of questioning its decisions.”

Commenting on the poor representation of civilians among the newly appointed governors, he said, “We have no doubt in the civil leadership’s ability to manage the governates. Yet, at the time being, further firmness is required, and that will only be seen in the character of military commanders.”

Abdul Hadi and his party are strong Sisi supporters. In March 2018, prior to the presidential elections, his party launched the Door to Door campaign to convince the electorate to vote for Sisi.

A parliamentarian for the opposition's "25-30" bloc condemned the prevalence of security commanders among the new governors, and described it as “a militarization of the governates.”

The parliament member, who declined to be named for personal security reasons, told Al-Monitor, “We have repeatedly demanded that civilian leaders hold civil posts, particularly since the post of governor is initially a civil office to manage the governorates and citizens’ affairs. Yet things don't always go as desired.”

He added, “We will continue to demand that civilians be given more chances to hold administrative positions in the state. As we rejected that Muslim Brotherhood leaders hold important state offices under the rule of [President] Mohammed Morsi, and his marginalization of the civil forces, we will refuse the marginalization of civilians at the expense of the military and police members.”

He added, “We are facing major problems in the House of Representatives because of our opposition, particularly since we don't have a parliamentary majority, and our bloc does not exceed 25 members. This is while the pro-state Egypt Support Coalition holds a majority and controls all decisions.”

Izzat Nimr, a political analyst who fled to Turkey in 2015, shares the same opinion. He told Al-Monitor, “That’s what we have warned against. The military coups generate a militarization and prevent the access of civilians and civil forces.” Sisi ousted Morsi in a 2013 coup d'état.

In the meantime, parliamentarians expect an imminent Cabinet reshuffle involving 10-12 ministers, including the heads of education, health and supply.