Birzeit University students are challenging the school's administration over what it says is the "militarization" of their activities on campus. 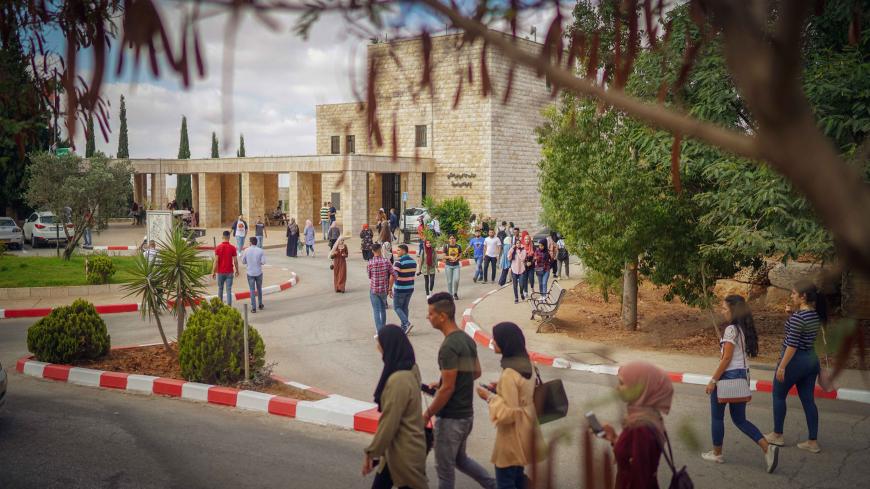 Students walk on the campus of Birzeit University, north of Ramallah, West Bank, seen in a picture uploaded Sept. 4, 2019. - Facebook/BirzeitUniversity

RAMALLAH, West Bank — Some student blocs at Birzeit University, north of Ramallah, have been on an open-ended strike since Dec. 16, staging sit-ins on campus and restricting access in response to the university’s policy that bans certain student activities.

Birzeit University Vice President Ghassan al-Khatib told Al-Monitor he believes the crisis is likely to drag on. He said students have been violating university policy by marching in military uniforms or clothing (kufieh) symbolizing the Palestinian struggle, and by displaying cartoon models depicting resistance weapons and tools.“

The student blocs representing the Palestinian factions are using military symbols in their activities. ... Such activities would give Israel a pretext to criticize the educational facility and to make accusations that it is being used for military training,” Khatib told Al-Monitor. He said the crisis erupted Dec. 11.

The university’s administration suspended classes after members of the Progressive Democratic Student Pole — the student arm of the Popular Front for the Liberation of Palestine (PFLP) — wore military uniforms during a procession celebrating the PFLP's 52nd anniversary. The administration tried to evacuate students and keep them off the campus, but protesters rammed the main university gate.

The same scenario played out again Dec. 16, when the Islamic Bloc, the student arm of the Hamas movement, wanted to organize an event to celebrate the 32nd anniversary of Hamas' foundation. After Birzeit University deemed such actions “militarized,” the Islamic Bloc students closed down the university and held a sit-in on the campus.

“What is happening at the university is dangerous and the administration had to suspend classes to prevent further friction between the students and the university guards," Khatib said. “In past years, some students used a cartoon model of an Israeli tank, which they detonated, and also used small replicas of missiles," Khatib said. “The university is keen on preserving its sense of nationalism and revolutionism, but not this way. It is seeking to put an end to such practices."

He added, "I think this time the deadlock at the university will drag on. Students believe they are defending a rightful cause, while the university’s administration believes it is an issue of respecting the university’s laws and regulations, as such activities would pose a great threat to the campus,” Khatib said, stressing that Israel storms the university and arrests students once or twice every year because of such events.

A Dec. 4 video posted by Israeli army spokesman Avichay Adraee on his Facebook page showed some Islamic Bloc students being arrested on charges that they were being trained by Hamas to conduct operations against Israel.

Khatib said, "The university decision to prevent the militarization of student activities is not something new. Every year, there is a dispute to this effect.”

Wissam Oweidat, who represents the Progressive Democratic Student Pole, told Al-Monitor students are holding the sit-in because the university’s decision banning their activities is "unacceptable."

"We will not discuss this issue with the administration. ... Students’ activities and events are not military parades. They are symbolic shows and a legacy of student work at the university,” Oweidat said.

He added that students are also calling on the university not to raise tuition — though Khatib has said that is something the school had no plans to do in the first place. The students also want Birzeit to allocate part of the new commercial center at the university to support a fund for needy students, and to improve the quality of services at the school's medical clinic. Oweidat stressed that the university’s administration refuses to hold dialogues with the student blocs’ representatives.

Sameh Abu Awad, secretary of the Workers Union at the university, told Al-Monitor, “We reject the term ‘militarization’ to describe the students’ events and activities. I believe the university’s decision regarding these activities is due to pressure exerted on it. There is Israeli incitement against the university and indirect threats from some of the donors.”