Since the Saudi-led coalition intervened against Houthis in Yemen in 2015, both warring sides have deliberately targeted medical facilities, while few if any projects are being carried out to revive the health care system in a country where millions are suffering. 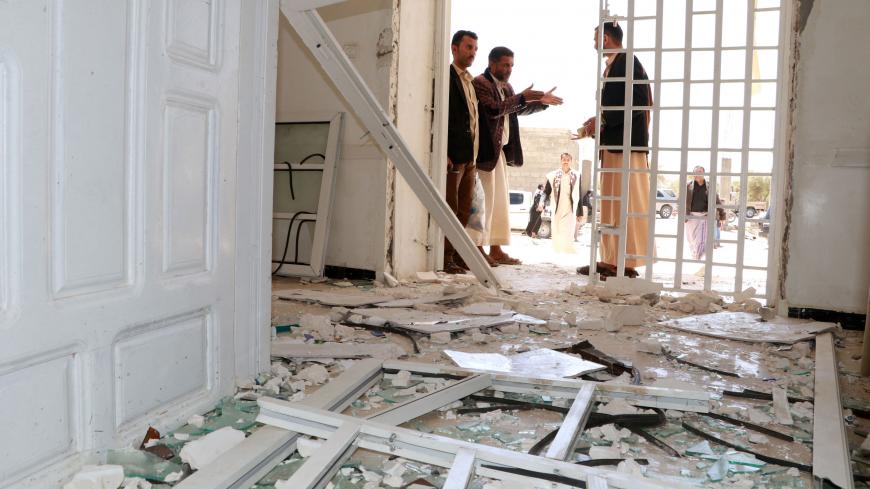 People stand at the entrance of a hospital damaged by an airstrike in the Kutaf district of the northwestern province of Saada, Yemen, March 28, 2019. - REUTERS/Naif Rahma

Deliberate targeting of Yemen’s health care facilities has worsened its civilians’ dire humanitarian suffering. Yet even with ongoing peace efforts brokered by Saudi Arabia, it is unlikely that this alone will repair the catastrophic damage and scars that Yemen’s war has left behind.

Such intentional destruction of Yemen’s state and infrastructure has created what the United Nations has called the “world’s worst humanitarian crisis,” which is mostly manmade. The conflict since March 2015, when Saudi Arabia led a coalition against the Houthi rebels and to restore Yemen’s government, has taken over 100,000 lives. Many more have likely died due to Yemen’s failing health care system, particularly as ailments such as cholera and malnourishment put millions of lives at risk.

The Yemeni Archive, which has been documenting rights abuses in Yemen, has compiled a database on the targeting of health care infrastructure as a war tactic. Countless attacks have occurred on hospitals and medical facilities, mostly from airstrikes, artillery fire and light weaponry; this occurred most frequently in 2015, between October and December 2017 and between March and August of this year.

Currently, over 50% of Yemen’s medical facilities are not functioning, meaning civilians are denied access to life-saving treatment. Fighting has often kept humanitarian aid workers from operating. Workers in functional hospitals have often been forced to stop working due to the violence, while many doctors and nurses have been unpaid throughout the conflict.

“The warring sides, particularly the Saudis, have contributed to the malnourishment of 7.4 million Yemenis and now they are denying them health care by bombing their hospitals,” Abdulrahman Jaloud, director of the Yemeni Archive, told Al-Monitor.

“Many of the attacks on hospitals have been systematic and therefore deliberate. Al Thawrah Hospital in Taiz was attacked no less than nine times by Houthi forces and on one occasion shelling continued for two and a half hours. Eleven hospitals that we know of have been attacked at least twice,” Jaloud said.

One hospital alone in Hodeidah was targeted on three separate occasions by Houthi forces; vital medical equipment was destroyed and one of the hospital’s floors was set on fire, according to the database.

Taiz has endured crippling violence throughout the conflict. Houthi and Saudi-backed forces, as well as the Islah Party and United Arab Emirates-backed Salafi militias, have grappled for control over the city.

“The health care program in Taiz has collapsed in all centers and hospitals due to the war and the direct destruction of the shells, looting and robbery from unruly groups in the areas of the national army [loyal to the Saudi-backed government],” Aylan Abdulhaq, a medic at Al Thawrah Hospital in Taiz, told Al-Monitor.

He said Taiz “lives under the disastrous consequences of an armed conflict that has destroyed much of its vital infrastructure and pushed the health system to the brink of collapse.”

Saudi Arabia has deliberately targeted Yemeni infrastructure since August 2015, according to research by Martha Mundy, a professor emeritus of anthropology at the London School of Economics. Her report says that "there is strong evidence that Coalition strategy has aimed to destroy food production and distribution" in Houthi-controlled areas.

Since the Nov. 5 Riyadh Agreement, designed to unify the Saudi-backed government of Abed Rabbo Mansour Hadi and the United Arab Emirates-backed Southern Transitional Council, fighting has decreased. For the time being, deliberate damage to health care infrastructure should also drop.

Still, tensions between the Houthi rebels and Saudi Arabia could erupt into clashes. Some analysts and Yemenis also say tensions still exist between the Hadi government and the Southern Transitional Council.

Meanwhile, few active measures to rebuild Yemen’s state have occurred; Yemenis will therefore endure ongoing suffering. The Houthis have also often blocked international aid workers from operating in their territories, which could continue while the conflict remains unresolved.

Saudi Arabia, as part of the unification deal, has launched development projects across Yemen. The vehicle for this is the Saudi Development and Reconstruction Program for Yemen, which has scheduled more aid efforts across the country.

Yet Jaloud doubts the sincerity of Riyadh’s efforts, particularly due to its past bombing campaign; he called for more external efforts to remedy Yemen’s suffering. “Saudi Arabia cannot bomb hospitals on one day then announce an aid project on another,” he said.

With the European Union praising Riyadh as being a “peacemaker,” having brokered the unification agreement, and with the Saudi-led development projects taking place, might there be fewer international efforts to provide aid or accountability for warring factions’ abuses? Even the international efforts sometimes leave something to be desired: The United Nations’ World Food Program was recently reported to have provided rotten date bars to Yemeni civilians.

Many of the Saudi development projects are not aimed at improving the circumstances in Houthi areas, where most of the population lives. Rather the Saudis have tried to shore up areas under nominal Hadi government control. Such Saudi development and reconstruction efforts in the past have enabled Saudi Arabia to expand its control over Yemen’s logistical hubs and consolidate its own links to Yemeni society, suggesting it is more about expanding Riyadh’s influence over the country.

UN aid chief Mark Lowcock in July criticized both Saudi Arabia and the United Arab Emirates for paying just a “modest proportion” of the hundreds of millions of dollars of humanitarian funding they pledged to Yemen early this year. This clearly indicates that both states are not preoccupied with alleviating Yemeni suffering.

The deal signed in Riyadh is mostly designed to halt tensions between the factions the Saudis had supported while consolidating Saudi influence.

Nasser said the unification deal has neither addressed humanitarian concerns in southern Yemen nor provided justice for victims of abuses.

“The Riyadh Agreement almost completely ignores the human rights abuses endured by civilians in the south of Yemen by the various warring parties," she added. She said key civilian needs in southern Yemen such as the release of arbitrarily held detainees and punishing abusers were not called for in the agreement.