Presidents Recep Tayyip Erdogan of Turkey and Donald Trump of the United States get along very well but appear to achieve little for the countries' long-term relationship. 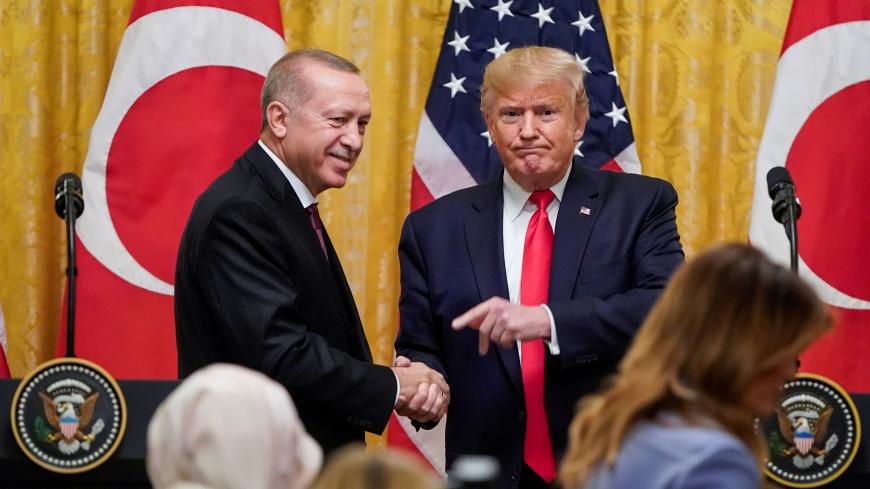 The words they chose in addressing each other suggested a kind of “love affair” between Turkish President Recep Tayyip Erdogan and the president of the United States, Donald Trump. The latter poured lavish praise on his guest at the White House, saying before the cameras, “I am a great fan of yours.” Erdogan, who called Trump “my dear friend,” saw his controversial visit to American capital coincide with the beginning of the impeachment hearings in Congress.

Aside from this sort of exchange of compliments, the visit did not seem to produce any significant outcome for the benefit of either, although many pundits took pains to discover or invent one. Looking at the results, I interpreted the unusual expression of sentiments between two heads of state as “a transatlantic love affair.”

The love affair aspect of the relationship did not escape the attention of many observers around the world. “The Trump-Erdogan love-in at the White House was deeply unedifying — and disturbing. The US president has become the authoritarian Erdogan’s sock puppet, begging the question: Why?” was the lead-in to a Louis Fishman article in the Israeli newspaper Haaretz. The Economist ran the headline “The strange love-in between Donald Trump and Recep Tayyip Erdogan,” with the subhead “It is killing the US-Turkish alliance.”

Robin Wright wrote in The New Yorker, “After a tirade of tweets condemning the House impeachment hearings on the future of his Presidency, Donald Trump spent the rest of Wednesday trying to cajole his Turkish counterpart, Recep Tayyip Erdogan, into cooperating — on anything." She quoted former US diplomat Philip Gordon as saying, “It is fair to ask if Turkey is still really an ally of the United States in anything more than name." I was with Philip Gordon in Abu Dhabi at an Emirates Policy Center event Nov. 11 — two days before the Trump-Erdogan meeting — where he made the same statement during the “Turkey: The Lost Game” panel moderated by Al-Monitor President Andrew Parasiliti.

A Reuters story summarized the outcome of the Oval Office meeting with the headline “Despite 'wonderful' meeting, Trump and Erdogan fail to resolve conflicts.” The article said, “Minutes after their news conference, the White House released a statement using firmer language than the two leaders, who boast of having a warm personal relationship while their governments are largely on icy terms. 'In order to achieve progress on other fronts, it is vital that we resolve the issues involving Turkey’s purchase of the Russian S-400 air defense system, strengthening our defense partnership,' it said.”

Not only did their White House encounter fail to resolve outstanding issues between Turkey and the United States but the way the meeting took place seems to have a boomerang effect on Trump; in this respect it could be interpreted as having been counterproductive for the American president while an impeachment procedure is underway. Even Senate Majority Leader Mitch McConnell has said he shared his "colleagues’ uneasiness at seeing President Erdogan honored at the White House.”

Trump also made comments about the Kurds that were interpreted as an insult to common sense and the intellect of everyone involved. “I think the president has a great relationship with the Kurds,” Trump said of Erdogan. “Many Kurds live currently in Turkey, and they’re happy, and they’re taken care of, including health care — we were talking about it before — including health care and education and other things, so that’s really a misnomer."

What is the source of the affinity between Trump and Erdogan? Business dealings could be part of the answer. The New York Times has examined the connections between the two leaders’ sons-in-law — Jared Kushner, son-in-law and senior adviser to Trump, and Berat Albayrak, Erdogan’s son-in-law and finance minister in Turkey. It is worth noting that the Trump organization has a valuable property in Istanbul. A person at a recent Morgan Stanley gathering in Miami told NBC News that Trump's former national security adviser, John Bolton, said in a speech that he "believes there is a personal or business relationship dictating Trump’s position on Turkey because none of his advisers are aligned with him on the issue.”

The most problematic aspect is that in the wake of Erdogan’s visit, we are not talking about Turkish-US relations but rather the relationship between Erdogan and Trump, with the Turkish president attracting the bipartisan wrath of the US Congress and Washington's public opinion and the US president embattled in his capital and seeing his chances for a second term weakened.

Erdogan has been seeing his popular support in Turkey steadily dwindle. While the military move in Syria kindled nationalist passions in Turkey, the incursion stopped short of uniting an increasingly alienated public around him. A new opposition appears to be forming that includes former Prime Minister Ahmet Davutoglu and Ali Babacan, a respected name associated with Turkey's economic revival. Former President Abdullah Gul endorses Babacan, who left Erdogan's ruling party this year. Both Davutoglu and Babacan are expected to form their own parties before the end of the year.

Many believe that Turkey will plunge into a deeper economic crisis next year or in 2021, and there is almost a consensus that Erdogan will not be able to survive it.

Could it be that the meeting in Washington, which did not bring any concrete results to the troubled relations between Turkey and the United States, was just one more aspect of a love affair between ever-weakening individuals?