A resolution passed by the US House of Representatives recognizing the 1915 Armenian genocide has stirred up Turkish concerns of Armenian demands for compensation. 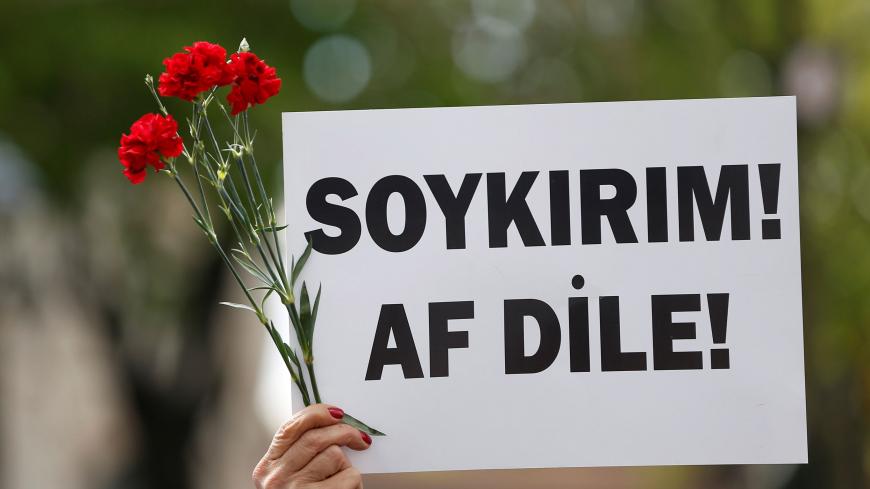 A human rights activist holds carnations and a banner that reads: "Genocide! Beg forgiveness!" during a demonstration to commemorate the 1915 mass killing of Armenians in the Ottoman Empire, at Sultanahmet Square in Istanbul, Turkey, April 24, 2017. - REUTERS/Murad Sezer

So far, successive Turkish governments have succeeded in preventing American presidents from uttering the g-word. But this year, the United States came close to joining the countries recognizing the Armenian genocide. The US House of Representatives adopted a nonbinding resolution Oct. 29, officially recognizing the mass killing of Armenians by the Ottoman Empire from 1915 to 1917 as genocide.

As expected, the decision prompted angry reactions in Turkey, with President Recep Tayyip Erdogan setting the tone by calling the resolution “worthless,” stating that “a country whose history is full of the stain of genocide and slavery neither has the right to say anything nor to lecture Turkey.”

Turkey staunchly rejects calling what happened in 1915 genocide or a crime against humanity. According to the UN Convention on the Prevention and Punishment of the Crime of Genocide, adopted in 1948, the forced “relocations” of the Armenians resulted in mass killings that constitute genocide. The convention defines genocide as "acts committed with the intent to destroy, in whole or in part, a national, racial or religious group," including "killing members of the group" and "deliberately inflicting on the group conditions of life calculated to bring about its physical destruction in whole or part."

The "relocation" of the Armenians in 1915 perfectly matches the latter clause of the convention. In contrast to official Turkish claims, historical evidence shows that Armenians were intentionally forced into terrible conditions.

Talat Pasha, the Ottoman interior minister at the time, is considered the architect of the Armenian genocide. Pasha was aware of the consequences of sending the Armenians to the Deir ez-Zor region, which is now a part of Syria. In a 1914 speech to parliament, Pasha explained why they did not send Greeks in Turkey to this region: “Migrants … if we were to send them there and scatter them in the desert, they would starve to death.” But the same Pasha, just 10 months after the speech, decided to resettle Armenians in the Deir ez-Zor region.

It is clear that the Armenian genocide influenced Lemkin's creation of the term. Consequently, he included the patterns he saw in these historical cases in the definition of genocide. In this way, it is futile to discuss whether there was an Armenian genocide, as the term was literally created to describe what happened to the Armenians in 1915.

Yet the question remains: Why is Turkey so afraid of the genocide label in the case of the Armenians? There is no single overarching explanation for Turkey's longstanding denials. One explanation is that being associated with genocide can hurt a nation’s pride. But some recent developments point to other concerns.

In a November 2019 interview in Karar daily, former parliamentary speaker Cemil Cicek said that the US Congress' move could have wide repercussions. “Armenians of Turkish origin have been filing reparation cases against Turkey for a while," he said. "The latest decision of the US House of Representatives on genocide, in one way, has fulfilled the demands of the Armenians in the political dimension … From now on, the courts might not justify their decisions by saying the matter should be left to politics … The Armenians now may seek to ensure a ruling from the higher court in favor of reparations, thinking that the current political climate in the United States might lead to some results to their advantage … Such a reparations decision can create problems for Turkey, which would take hundreds of years to overcome.”

Cicek is referring to the 2010 case of Alex Bakalian, an American of Armenian descent, who, alongside others, sought $65 million in damages in a US court related to the 1915 genocide, as well as a judgment stating that Turkey could be tried in US courts for genocidal actions under the Ottoman Empire. Bakalian also demanded compensation for the land that he says was confiscated, territory that also includes parts of the Adana Incirlik base allocated to the US Air Force.

A US judge dismissed the case in 2013 under “the political question doctrine,” which says certain questions should be handled by the executive branch, meaning that first the US government would have to label the events of 1915 a genocide and then the US courts would proceed accordingly.

In his interview, Cicek hinted that the political question doctrine could be deemed solved with the recent House resolution.

However, in August, the US Court of Appeals for the 9th Circuit also rejected the compensation demands of Bakalian and others, stating that the statute on land grab claims expired.

Regardless of whether such cases have any chance of success after the House resolution, such developments and their echoes resonate in Turkey, where the government is seriously concerned that the US recognition of the genocide may prompt demands for compensation domestically. Turkey's rigid protests against genocide resolutions are intended to avoid such demands being directed toward Turkey.