Can EU's fear of terrorists give Turkey clout in ocean drilling?

Following his threats to flood Europe with Syrian refugees, the Turkish president is now trying to use Islamic State suspects as leverage. 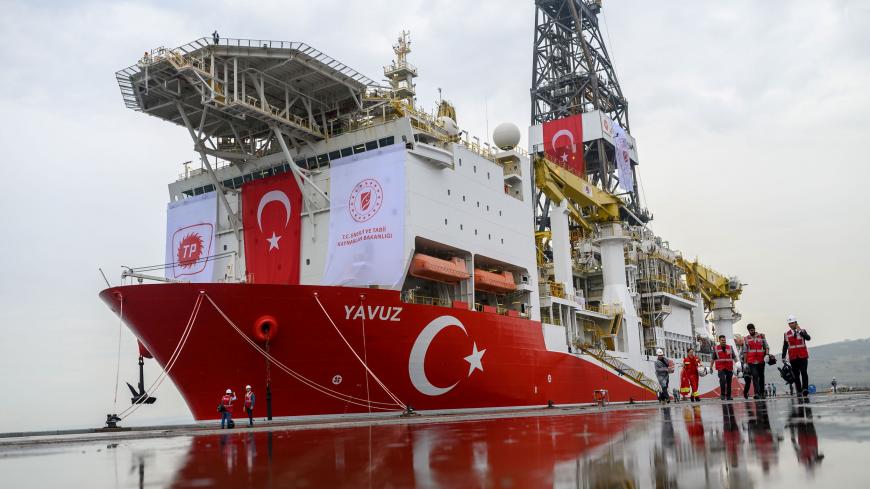 Journalists walk next to the Turkish oil drilling ship Yavuz, scheduled to search for oil and gas off Cyprus, at the port of Dilovasi, Turkey, June 20, 2019.

President Recep Tayyip Erdogan has once again stunned Europe, this time by threatening to send captured Islamic State (IS) suspects there. This follows his blackmail campaign in October, when he pledged to flood Europe with 3.6 million Syrian refugees.

Erdogan is choosing to tackle his problems with Europe not through dialogue, but rather intimidation.

Erdogan's most recent threats came as he was responding to the European Union warning of sanctions against Turkey’s drilling operations in the eastern Mediterranean.

Before departing for the United States last week, Erdogan told the media that while Turkey was at the table with the EU now, “these negotiations could collapse at any moment."

He added, “You have to reconsider your attitude toward Turkey, which has so many [IS] members in its prisons and also in Syria. These doors can be unlocked and [IS] people can be sent to you. Don’t try to intimidate Turkey about the developments in Cyprus."

Nobody really expected the IS issue to become an element of the energy wars in the eastern Mediterranean. But Ankara is angry that the Cyprus government is pursuing oil and natural gas exploration without ensuring the rights of the Turkish side, and that the EU is backing Cyprus.

Ankara has found itself isolated. Greece, which had made exploration deals with Italy's ENI, France's Total and America's Noble and ExxonMobil, secured the full support of the United States and the EU last year. Early this year, the Republic of Cyprus, Greece, Israel, Italy, Jordan, Palestine and Egypt established the Eastern Mediterranean Gas Forum in Cairo.

In July, Turkey's drilling operations near Cyprus prompted the EU to threaten sanctions that stipulated severing high-level contacts with Turkey, suspending the Comprehensive Air Transport Agreement and reducing 145.8 million euros ($161.4 million) in funding the EU was to provide until 2020. On Nov. 11, the EU announced the framework of sanctions targeting people and institutions participating in Turkey’s exploration activities.

This made Erdogan furious.

On Nov. 11, a US citizen of Jordanian descent known as Muhammed Darwis B — a suspected IS member who was being held at a repatriation center in Turkey — was sent to Greece as he requested. Greece refused him entry, leaving him stranded between border gates. Several days later, the United States agreed to receive him. When he arrived Nov. 25, he was allowed to enter and travel to visit relatives.

Turkey, ignoring negative reactions from many corners, has continued with the deportation process. One person was sent to Denmark. Seven German nationals were sent to Berlin on Nov. 14, and two were flown to Frankfurt on Nov. 15. Eleven French and two Irish nationals are said to be next in line.

Some European countries were distraught. Luxembourg's Foreign Minister Jean Asselborn said the extraditions could endanger security. “Freeing of these barbarians must be prevented," he said, calling Turkey's actions "out of order.” German Foreign Minister Heiko Maas said that for those deported to be tried in a German court, evidence of their IS connections must be proven. He accused Ankara of not sharing pertinent information.

Europe's legal system offers flexibilities that can benefit IS members. If those sent to Germany are not definitively implicated in armed clashes, killing or torture, they can avoid the court process. Just having traveled to IS-controlled areas isn't enough; prosecutors want proof that those sent back intentionally joined IS.

France, however, declared that although it prefers that IS suspects be tried in the countries where they committed crimes, it will nevertheless prosecute the ones returned by Turkey.

Sending IS members back to their original countries is a major issue, even beyond Turkey’s desire to use such deportations for its own interests. The decision by some countries to revoke the citizenship of IS members has made the issue much more complex. For instance, as of February the UK had revoked the citizenship of about 100 returnees.

According to official data, there are 1,180 IS suspects in Turkish prisons, 250 in repatriation centers and 850 in areas Turkey controls in Syria. There are also an estimated 90,000 IS-affiliated suspects in Kurdish camps in Syria. Ankara was accused of allowing some prisoners to escape during the operation it launched in Syria last month.

Interior Minister Suleyman Soylu explained how Turkey will take advantage of the situation: “We say to Europe ... these are your people. ... We will send back these people to you. But these countries rise against this and holler, ‘We have revoked their citizenship; do whatever you want with them.’ No sir, no matter what you do, we will send them back to you.”

A European official who deals with IS issues said he, like others, sees Erdogan's actions as blackmail.

“Erdogan, with his blackmail policy, gets whatever he wants because economic interests override [everything else]. Fear of immigration is big," he told Al-Monitor on condition of anonymity. “[European countries] didn’t want to take the IS militants and their families while they were held by Kurds; they wanted them to stay there. Some countries quietly brought over some IS families. But this is not a sustainable policy. Now as Erdogan is [deporting] them, many countries are astounded,” he added.

Addressing Turkey's threat to flood Europe with refugees after the EU criticized Ankara for its invasion last month against Syrian Kurdish fighters, Hungarian Foreign Minister Peter Szijjarto advised his EU colleagues to remember the leverage Turkey holds. He said, “The EU for its own security has to cooperate with Turkey. Some countries still don’t realize that Turkey has 4 million refugees.”

What Europe doesn’t understand is that there is no end to blackmail. It started with refugees; it continues with IS. Is there a guarantee that something new won't erupt?