Turkish authorities allowed an excavation and draining of the 12,000-year-old Fathomless Lake in pursuit of a rumor that there was Roman treasure on the lake bottom. The lake was drained, revealing no treasure. 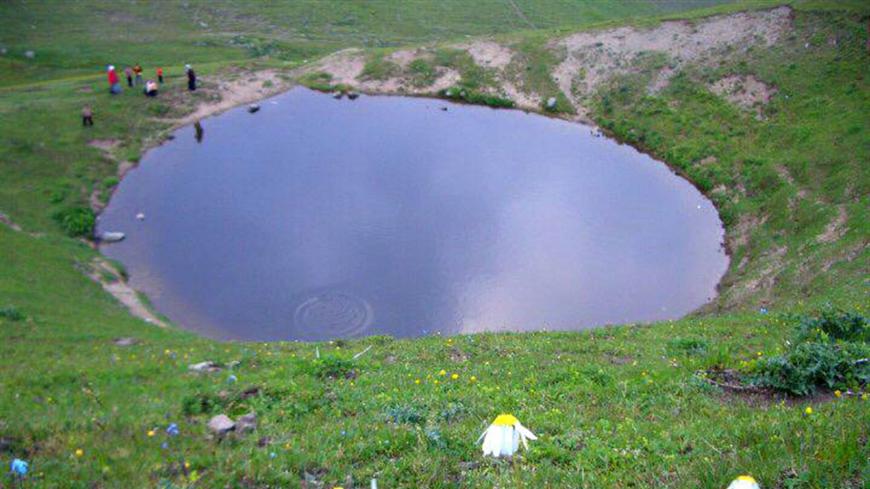 Turkey's Fathomless Lake before it was drained, seen in a photo uploaded Nov. 16, 2019. - Facebook/hurriyetdailynews

Why is the Turkish government so desperate that it would go on a treasure hunt at the cost of wiping out a 12,000-year-old lake, one of the natural wonders of the Black Sea region?

The story is quite tragic. Two local notables applied to the city’s local authorities for a permit to drain the 12,000-year-old Fathomless Lake to look for Roman treasure. Thanks to their clout, they easily obtained the authorization and drained the lake to begin excavating the bottom, only to find nothing.

When the government stepped in more than a week later, it was too late. The Turkish Ministry of Environment and Urbanization announced the area where the glacial lake is located would be designated as a “protected area” and that the lake would be filled with water again.

"A scientific commission consisting of scientists from universities has been formed to rehabilitate the lake and its surrounding area," Environment Minister Murat Kurum said Nov. 18.

However, according to many experts, what is done is done and the damage is irreparable.

Lashing out at the authorities that gave permission for the excavation, the Turkish Society for Geomorphology said the lake was a “paleogeographic archive” that “has been destroyed” and that it is impossible to restore it. The association also questioned the quick permission given the two individuals in a country where scientists have to work for months and struggle with bureaucracy to obtain simple research permits.

Geomorphologist Erdal Gumus of Turkey’s Balikesir University lamented the loss. “The real treasure was the lake,” he was quoted as saying by Turkish daily Haberturk.

“The glacial lakes on the Earth are remnants of the last glacial epoch and their ages vary between 12,000 and 18,000,” said geological engineer Raif Kandemir of Recep Tayyip Erdogan University in the Black Sea province of Rize, was quoted as saying by Hurriyet Daily News.

So why did the Turkish government and relevant departments walk into such a calamity?

A major answer is because Turkey is facing an economic crisis and its resources are scarce. The treasury is suffering, there is not much left to sell while the country's debt keeps growing. Few options remain: new taxes, more debt or somewhat clownishly, finding a treasure. Turkey’s budget deficit reached more than 100 billion Turkish liras ($17 billion) in the period between January and October.

Even the additional support of some 49 billion liras taken from the Turkish Central Bank’s “rainy-day” cash didn’t help the situation. There is a serious increase in the foreign debt as well. When the ruling Justice and Development Party (AKP) came to power in 2002, Turkey's external debt was $129.6 billion. As of September, Turkey's foreign debt was some $446.8 billion.

Thus, it may not be surprising if the government attempts to hunt treasure all over the country. Indeed, while the lake was drying up, the Turkish parliament approved a new tax package that will render summer vacations in Turkey more expensive, as the new package calls for a 1% accommodation tax in 2020, and 2% in the following years. The package also raises the income tax for white collar workers. Additional taxes are going to be imposed on more than 100,000 units of luxury housing.

Millions are in desperate straits in Turkey, as the number of people living in hunger and below the poverty threshold keeps increasing. The unemployment rate rose to 14% in August. Youth unemployment reached the highest rate since 2005 at 27.4%. According to official figures, the number of unemployed people increased by 980,000 compared with the same period last year, rising to 4.65 million. Moreover, these figures only show those who officially seek jobs.

Turkish opposition leader Kemal Kilicdaroglu says the real unemployment figure is some 8 million. Unemployment combined with hopelessness can trigger a social crisis in addition to the financial one.

Thus, the desperate government’s decision to drain a 12,000-year-old lake to look for treasure was not a surprise.