A Turkish court has upheld its conviction of 12 Cumhuriyet journalists, defying a September decision by a higher court and exposing discord in the Turkish judiciary. 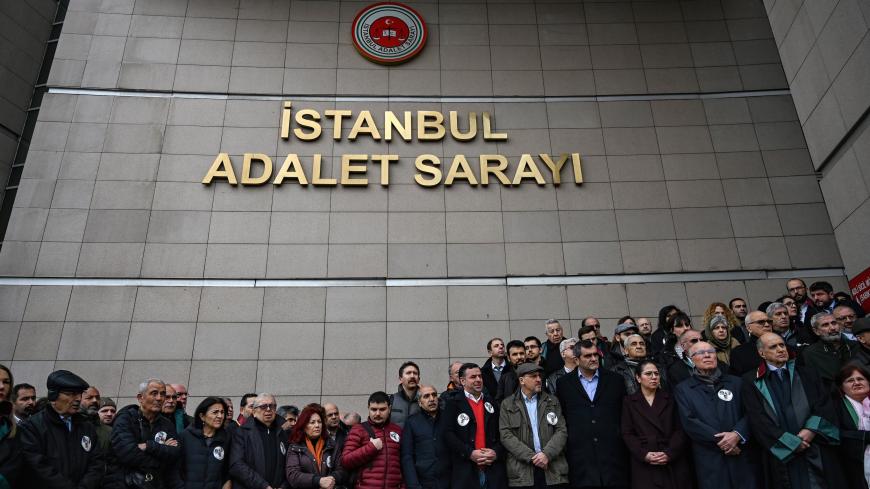 Lawyers and opposition lawmakers gather outside a courthouse in Istanbul to protest the upholding by an appeals court of the jail sentences for opposition journalists in a long-running case targeting the Cumhuriyet newspaper, Feb. 21, 2019. - OZAN KOSE/AFP via Getty Images

ISTANBUL — More than three years after the prosecution of journalists and other employees of Turkey’s opposition Cumhuriyet newspaper began, a Turkish court upheld its conviction of 12 former staff members and acquitted one in a retrial Thursday.

The decision continues a legal saga that has seen defendants in and out of prison on various terror-related charges, and the case will now be sent to an appeals court despite a September ruling by a higher court overturning convictions against the former newspaper employees.

Journalist Kadri Gursel was acquitted in Thursday’s decision, while the other 12 journalists will face charges stemming from their reporting and contacts with alleged members of terrorist organizations ranging from far-left groups to Kurdish activists and supporters of the movement led by exiled cleric Fethullah Gulen, which the Turkish state claims orchestrated a July 2016 coup attempt.

Erol Onderoglu, the Turkey representative for Reporters Without Borders, attended the trial and said the reversal of a Supreme Court of Cassation verdict by a lower court revealed “inter-institutional fighting” in the Turkish judicial system.

“This is an outrageous decision, showing clearly that the Cumhuriyet trial is no longer concerning journalists but is now a part of a huge discussion and huge dispute in the Turkish high judiciary,” Onderoglu told Al-Monitor.

He added, “It is not about the obvious violations of media freedom in Turkey.”

Onderoglu said the Supreme Court should put an end to the “mistreatment” of journalist through unending legal prosecution. Cumhuriyet is Turkey’s oldest newspaper and remains one of the few opposition voices in the nation’s mainstream media landscape, where more than 90% of outlets are pro-government.

The court upholding its prior ruling to convict the Cumhuriyet employees was the same authority that ordered the re-arrest of prominent Turkish journalist Ahmet Altan last week after he was briefly released from prison on terror-related charges.

On Tuesday, the global press watchdog the International Press Institute released a report highlighting that more than 120 journalists are in Turkish jails as media freedoms continue to deteriorate in the country following the failed 2016 coup. In the last three years, about 150 media outlets have been shuttered, drawing condemnation from international observers who said the Turkish state was suppressing dissident voices.

Journalists in Turkey continue to operate under pressure, often self-censoring their reporting and being singled out when pursuing topics deemed controversial by state officials. On Wednesday,Ahmet Takan, a columnist for the Korkuzuz newspaper, was attacked with a baseball bat in Ankara. His name appeared on a list of journalists published in 2018 by the Nationalist Movement Party.

“The government that issued the orders for this conspiracy and the judiciary and media that acted as their accomplices should know very well that we will never fear them, nor will we ever bow down,” Sik said in a court statement.

In an unusual step, the judge banned the presence of illustrators, who are normally permitted to depict hearings through drawings, while defendants criticized the merits of the trial, in which most defendants are being prosecuted for “aiding and abetting armed terrorist organizations without being a member” among other charges.

"Our arrest served the purpose of preventing criticism of the government,” said Akin Atalay, chair of the Cumhuriyet Foundation Executive Board. “The sorry state of the media in Turkey today is a result of this trial. The prosecutor who filed a case against us for aiding FETO is currently on trial for FETO membership himself," he added, using the acronym for the Gulen movement.

The indictment for the Cumhuriyet trial was originally completed on April 3, 2017, against 18 contributes and staff members, some of whom had been placed in pretrial detention following house raids in the fall of 2016. Apart from terror charges, some defendants were charged with contacting individuals who allegedly used the ByLock phone application, alleged to be a communication tool between Gulen supporters.

Following Thursday’s verdict, the conviction of 12 Cumhuriyet employees will be sent back to an appeals court. Emma Sinclair-Webb, the Turkey director for Human Rights Watch, said the proceedings would continue on “bogus evidence.”

“It’s another decision that shows Turkey’s justice system is on its knees, and that again journalism has been convicted” as a crime, Sinclair-Webb told Al-Monitor.