US approves financial aid for White Helmets mission in Syria

The United States is providing $4.5 million in aid to the Syria Civil Defense in opposition-held areas to support the group's role in helping victims and their families. 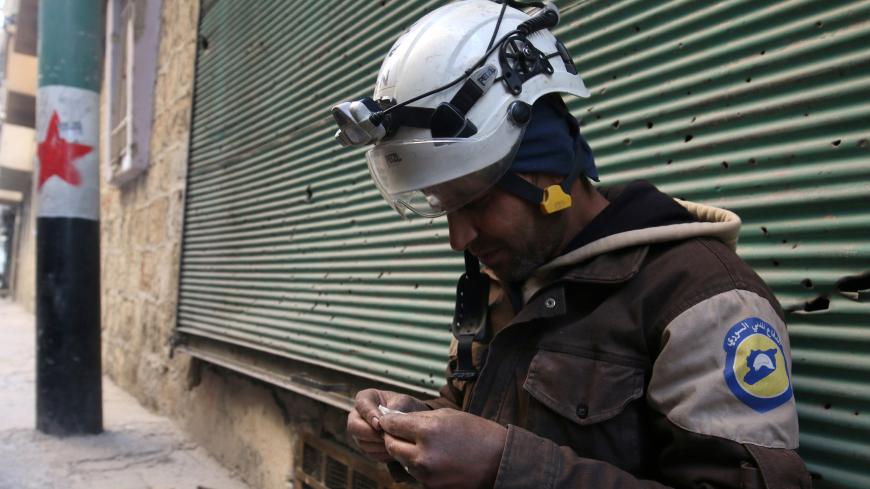 ALEPPO, Syria — Maysa Nader has many responsibilities as a wife and mother of three, yet she makes time to volunteer in the Syria Civil Defense — the White Helmets — in the areas under opposition control in Aleppo province. Nader seems adept at balancing her familial and volunteer demands, with her family's support.

Each morning, she told Al-Monitor, she heads to the White Helmets center in Atareb. Nader, 25, is one of more than 200 women who volunteer in Idlib, Hama, Aleppo and Latakia provinces.

“We ... work as an integrated team," said Nader, who joined the organization in February 2017. "Our tasks are diverse. We provide first aid to civilians and organize awareness sessions on the [dangers of unexploded] remnants of war for school students, in camps and civilian communities. We set up recreational activities for children in the displaced camps."

Jamil Ibrahim, a volunteer in Azaz, told Al-Monitor, “Our mission in the White Helmets is to save lives and help people, to minimize the disastrous conditions they live in due to the war. It is a noble mission that makes me feel more humane."

Ibrahim said the Syria Civil Defense teams suffer casualties, and on Oct. 31, they were mourning one of their own in Idlib. Ahmad Qubbah was killed in Darkoush as he searched for casualties near the site of an explosion caused by a Russian warplane attack that targeted an ammunition and weapons depot belonging to the opposition.

Since the Syria Civil Defense was founded in 2013, more than 270 of its volunteers have been killed and almost 800 injured, said organization spokesman Ibrahim Abu al-Laith in Aleppo.

The White Helmets now have roughly 3,000 volunteers. In addition to the four provinces listed above, the organization operates in Homs, Daraa and other areas. "Our services have been provided to more than 4 million civilians in opposition-held areas. We provide rescue, firefighting, ambulance, outreach service and assistance projects for displaced persons in the camps and some development projects," Abu al-Laith told Al-Monitor.

US President Donald Trump recently approved $4.5 million in support for the Syria Civil Defense. The White House issued a statement Oct. 23 that said, "The United States encourages our allies and partners to join us in our support for the [Syria Civil Defense] and in our efforts to protect civilians, religious and ethnic minorities, and other innocent victims of the Syrian conflict."

Speaking about the importance of US financial aid to the White Helmets, Abu al-Laith said, “We got the support as a result of visits by members of the Syria Civil Defense's board to several Western countries." The current support is expected to continue until the end of 2020.

Abu al-Laith told Al-Monitor the group also receives funds from Qatar, Britain, the Netherlands, Denmark and Germany, as well as from relief and humanitarian institutions such as the Turkish Red Crescent, the Turkish Humanitarian Relief Foundation, the Qatar Charity and other foundations operating in Canada and Europe.

People who work in Aleppo and Idlib provinces told Al-Monitor that they appreciate White Helmet volunteers and the group's work to mitigate the impact of the disasters they endure.

Hasna Barakat, a civilian activist in western Aleppo, said the White Helmets deserve the recent US support. “White Helmets volunteers are putting their lives at risk to save people from under the rubble after their homes are bombed by regime and Russian planes, so I hope they will receive continued support for their volunteer work to flourish,” Barakat said.

Activist Abdel Fattah al-Hussein, who works in Aleppo and Idlib provinces, told Al-Monitor, “The White Helmets volunteers have a noble humanitarian message and provide great services to all segments of society so that people can enjoy security and stability. Volunteers face harsh conditions. Their centers and cars are being bombarded by explosive barrels from the regime's helicopters. These risks and sacrifices have prompted international actors such as the US to support the organization, and we can only thank them for their support.”

Activist Salwa Abdel Rahman, who is from Idlib, told Al-Monitor, “Since the Syrian revolution changed from a peaceful movement to armed action, the number of victims has risen and shelling by regime forces has contributed to destroying more infrastructure in opposition-held areas. This daily reality has left dozens of wounded and dead whose homes collapsed over their heads. ... The presence of this humanitarian organization is still necessary in opposition-held areas, as the people are in dire need of this assistance amid these ongoing disasters.”