What messages lie behind Assad’s visit to southern Idlib?

Syrian President Bashar al-Assad’s recent visit to the front line in southern Idlib province raised controversy and questions among opposition forces about Assad's goals and what messages he might have been sending — and to whom. 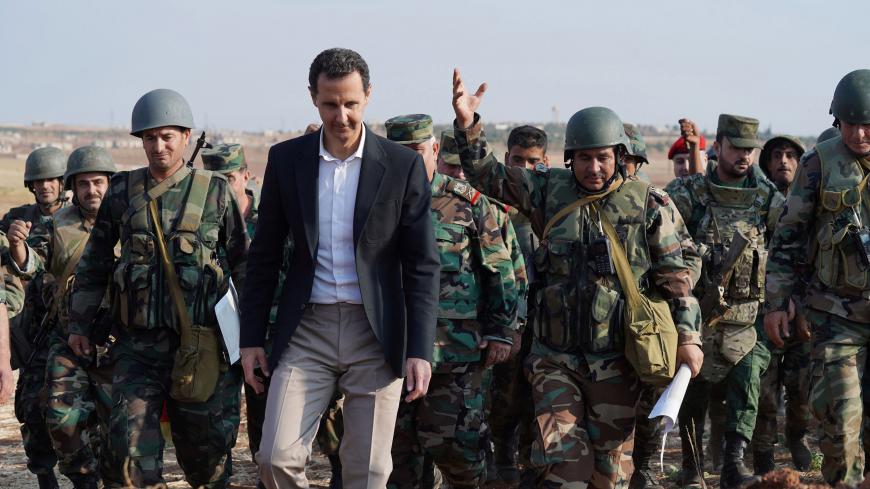 ALEPPO, Syria — Syrian and Russian aircraft launched dozens of air raids this week on several opposition-held towns and villages in southwest Idlib province, the Kurd and Turkmen mountains and Kabanah in northern Latakia.

A Nov. 4 raid killed at least three civilians in Idlib's Jisr al-Shughur, and since then there have been reports that the forces bombed a hospital in Shinan.

Although official military operations of the Syrian government, Russian forces and their allies halted Aug. 31 after Russia announced a cease-fire, limited raids have continued. The forces have been leading ground attacks on Kabanah since Oct. 24, but their repeated attempts have failed and they have incurred significant losses. Fighters of the Islamist militia Hayat Tahrir al-Sham and the Turkish-backed rebel coalition the National Liberation Front are stationed on battlefronts in opposition-controlled areas.

On Nov. 1, opposition factions launched a wide-scale military attack in northern Latakia and advanced against government forces on several axes. They took control of strategic areas in the mountains and Kabanah. The factions held these locations for 12 hours before retreating — only after causing huge material and human losses on government forces.

The field developments came after Syrian President Bashar al-Assad paid a visit Oct. 22 to Hubait, a town close to the front lines in southern Idlib that government forces seized Aug. 11. Assad met with army commanders and pro-government forces and inquired about their military preparations.

Assad’s trip raised much speculation about what it meant and what messages it might have been designed to send. Might it herald the resumption of the government’s military operations in Idlib and the end of the cease-fire?

The visit coincided with a summit held between Turkish President Recep Tayyip Erdogan and Russian President Vladimir Putin in Sochi, Russia, that resulted in an agreement regarding the area east of the Euphrates in northeastern Syria. Was Assad sending a message to Turkey, to demonstrate that his forces were ready to resume battles in Idlib and control more areas if Turkey wasn't willing to compromise in those negotiations?

Syrian state media reported that in Hubait, Assad did speak with commanders about the possibility of waging military operations in Idlib, and called the Turkish president "a thief ... stealing our land."

Mohamad Rasheed, a member of the Nation Liberation Front media office, told Al-Monitor it is possible that Assad plans action in Idlib and elsewhere. He said, "The regime’s operations in Kabanah were launched two days after Assad’s visit."

Hasan al-Hamada, deputy defense minister in the opposition’s Syrian Interim Government, told Al-Monitor, “Assad’s [action] looked like a message to the opposition and reflected the government’s insistence on seizing part of Idlib to control the Damascus-Aleppo and the Aleppo-Latakia highways. In the following days, we witnessed escalation — shelling and attempts at ground advances from the regime." But, he added, "Our Free Syrian Army is ready to defend and deter any expected attack from Assad’s bandits and allies.”

Media activist Abdul Fattah al-Hussein, who moves between Aleppo and Idlib provinces, told Al-Monitor, “Assad mostly aimed at supporting his forces and militias that sympathize with him and to assert that military operations against opposition factions will not stop." Hussein also saw the possibility that because the visit coincided with Erdogan’s meeting with Putin, Assad might have been flexing his muscle.

There are those, however, who think the decision to make the trip wasn't Assad's to make. According to some opposition military commanders, Russia had a hand in the move, as Moscow also wanted to pressure Turkey and plans to make gains east of the Euphrates.

“Assad and his military commanders don't have the ability to make the decision of war or peace, and Assad’s appearance in Idlib was used to push Turkey to meet [Russia's] demands during the Sochi summit held on the same day," Mustafa Maarati, military commander of the opposition's Syrian National Army, which is affiliated with the Free Syrian Army, told Al-Monitor. "Russia wanted to use Assad’s visit to pressure Turkey into giving it some gains in Idlib, and Russia showed cooperation on the issue of a safe zone east of the Euphrates.”

The 10-point Sochi agreement requires the Kurdish People's Protection Units to withdraw 30 kilometers (19 miles) from a planned safe zone at the Syrian-Turkish border. That action was supposed to have been accomplished by Oct. 29, but Erdogan said as of Nov. 7 that it was not.

Some observers speculate that Iran — also miffed that it wasn't invited to the Sochi meeting — was behind Assad's Hubait trip. Syrian National Army media coordinator Yahya Mayo told Al-Monitor, “Assad’s visit was a message of protest that Iran wanted to send to Turkey and Russia and through which it implied that it can hinder bilateral understandings, following its exclusion from Sochi.”