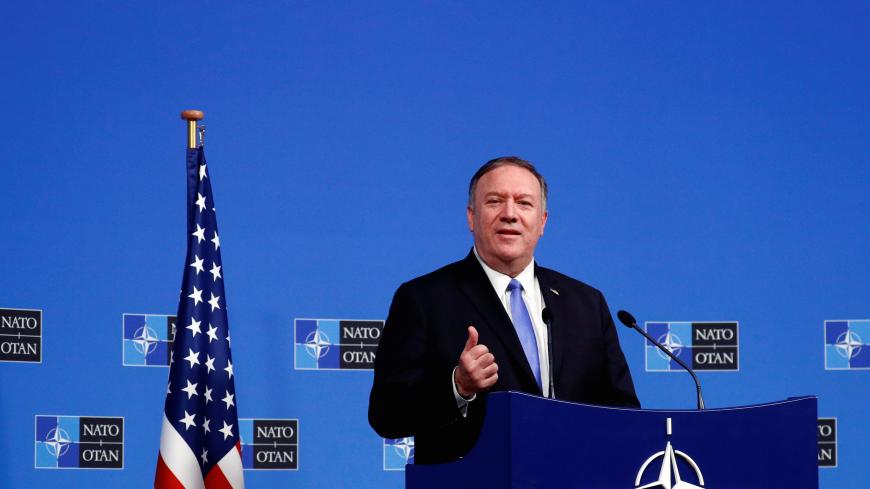 US Secretary of State Mike Pompeo holds a news conference at the Alliance headquarters in Brussels, Belgium, Nov. 20, 2019. - REUTERS/Francois Lenoir

Secretary of State Mike Pompeo urged Iranians to continue sending messages exposing the Iranian regime’s brutal crackdown on recent widespread protests that have killed, by some estimates, more than 200 people. He said the United States would impose sanctions on those it could identify for perpetrating abuses.

“The Iranian people are, once again, on the streets because of the regime’s poor economic management,” Pompeo said in remarks to the press at the State Department today. “Instead of addressing their grievances, Tehran has responded with violence and by blaming those outside of the country.”

Despite the Iranian regime's shutdown of the internet last week, Pompeo said the United States had received to date some 20,000 messages, videos and pictures from Iranians through the Telegram messaging service. He said he hoped they would continue to send more.

“The United States hears you,” Pompeo said. “We will continue to sanction Iranian officials who are responsible for these human rights abuses, just like we did last week to Iran’s minister of communications.”

Pompeo also condemned the assassination last week of an Iranian he said had defected to Turkey, and suggested without offering evidence that it was likely conducted by Iranian government-backed forces.

Pompeo, asked about the alleged harassment of families of Iranian reporters for Western-backed outlets like Voice of America, repeated his stance that the Donald Trump administration is seeking Iran behavior change, and just wanted Iran to act like a normal nation.

He did not mention Iran’s recent moves to reduce its compliance with the 2015 Iran nuclear deal, or President Trump’s previous expressed interest in sitting down with the Iranians to discuss a broader deal. Such a deal would address the sunset of limits on the size of Iran’s enrichment program, ballistic missiles and Tehran’s support for regional proxy forces.

Asked if the United States would help provide internet to Iranians if the regime blocked it again, Pompeo said that Iran’s shutting down of the internet had failed to tamp down the protests.

“As for internet access … it’s worth noting that while that was done to tamp down the protests that took place and, frankly, deny the world access to see some of it, it’s not working,” he said. “I talked about the 20,000 messages we’ve received, which we believe all came from inside the Islamic Republic of Iran … so there is the capacity for Iranians to communicate outside of the country.”

“When you turn your internet off, the little bit of commercial activity that is already taking place inside of Iran is diminished,” he said, adding that would “further deny them to have the resources to conduct terror campaigns around the world.”

“We call on the Egyptian government to respect freedom of the press and to release journalists detained in a raid last weekend,” he said.

In response to press questions, Pompeo described Turkey’s testing yesterday of the Russian-made S-400 system as “concerning,” but declined to get out ahead of what Trump may decide to do.

“We have made very clear to the Turkish government our desire to see them move away from … putting into full operationalization the S-400 weapon system,” he said.

Pompeo declined to discuss the Lebanese protests, as well as a recently revealed White House hold on security assistance to the Lebanese armed forces, which the State and Defense departments have reportedly opposed.

On Iraq, Pompeo said the United States maintains contact with all elements of the Iraqi leadership in support of carrying out a counterterrorism mission there. He said he thought that the US and Iraqi leaderships share a desire for a reduced Iranian presence and influence in Iraq.

“We have no qualms in talking about the fact that we think the Iranian presence there is harmful to that, decreases the risk that the Iraqi people can have the sovereignty that they so richly deserve, and we’re confident that the Iraqi leadership wants the same thing that we’re helping them work toward,” he said.

In Iraq, the Iranian presence is more visible than in Lebanon, and it is also more associated with the status quo that the demonstrators are protesting against, said Randa Slim, a Levant expert at the Middle East Institute.

Similarly, Slim said, the Trump administration seems to have less of a clear Iraq or Lebanon policy than an Iran policy that it extends to Iraq and to Lebanon.

But while the Trump administration has imposed severe economic pressure on Iran, it has not presented a vision of what it would do if the Iranian regime collapsed, or who it would want to negotiate with, said Pooya Dayanim, an Iranian American pro-democracy activist in Los Angeles.

“Iran economically is collapsing and the regime ideology is bankrupt and they don’t have any way of addressing the people’s needs,” Dayanim told Al-Monitor. “In between the sanctions on the one side, and corruption and graft on the other, there is not much for people in Iran to look forward to under this regime.”

“As far as the US government, imposing sanctions is the lazy man’s approach to foreign policy,” Dayanim said. “And they have not announced anything else: What do they want for Iran, who do they negotiate with. If the regime collapses, who do they want to handle it.”