All eyes are on the latest polls in the Palestinian territories as more factions agree to hold the parliamentary and presidential elections in February. 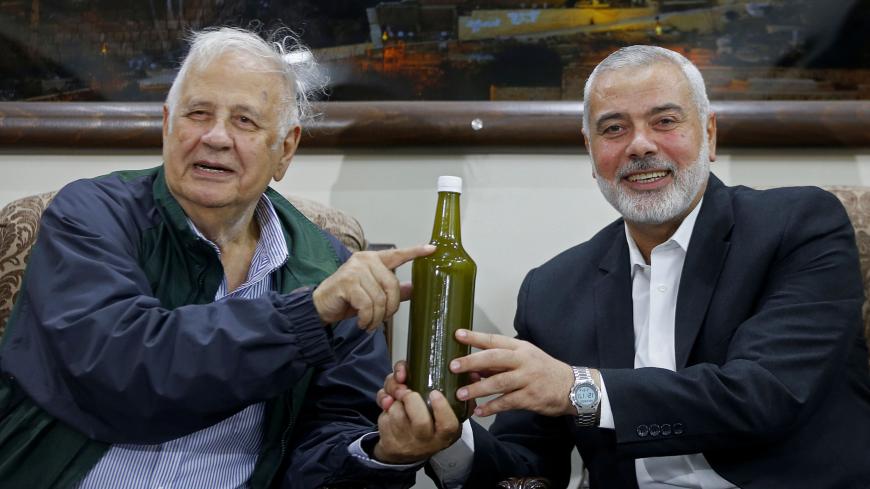 GAZA CITY, Gaza Strip — As most Palestinian factions, including Hamas, agreed to hold general elections that could take place in February, all eyes are now on the latest electoral opinion polls conducted throughout the Palestinian territories.

These polls, published Sept. 9 and 22, have somewhat baffled politicians. They showed that one-third of Palestinians say they will not vote in favor of any political party in the elections.

These findings prompted the Palestinian NGO Network to convene. Sessions were held Nov. 19 and 20 to discuss the poll results and to identify why so many Palestinians are reluctant to vote for political parties.

The most recent session was held in cooperation with the Friedrich Ebert Foundation, one of the organizations that participated in conducting one of the polls, whose results were published Sept. 9.

The Palestinian Center for Policy and Survey Research conducted Poll No. 73 in cooperation with the German Konrad Adenauer Foundation in Ramallah. “If new legislative elections were held today with the participation of all factions, 66% say they would participate in such elections,” according to the poll results published Sept. 22.

A few days later, on Sept. 26, President Mahmoud Abbas surprised the Palestinian public by announcing his intention to call for presidential and legislative elections. He instructed the Central Election Commission to open dialogues with all Palestinian parties to ensure their participation in the upcoming elections.

All the factions have agreed to hold elections, except for the Islamic Jihad, which has refused to participate in any Palestinian elections under the Oslo agreement.

Ghassan Al-Khatib, the director of the Jerusalem Media and Communication Center and a former Palestinian minister of planning, told Al-Monitor that the results of successive polls carried out by the center showed a continuous decline in the percentage of support for Palestinian political parties and a loss of confidence in them amid the ongoing internal division that has been taking place for 13 years.

He expected a slight drop in the rate of abstention if elections are held in the coming months. “The public sees professional and independent figures as a better option in any elections. Palestinians believe that once political parties win, they will start working for their own interests and not for that of the citizens who elected them.”

The last Palestinian presidential and legislative elections were held in 2005 and 2006, respectively.

According to Article 1 of the 2005 amendments to the Palestinian Basic Law, the term of the presidency of the Palestinian National Authority and that of the Palestinian Legislative Council is set at four years. The internal divide between Hamas and Fatah, however, has prevented the holding of any presidential or legislative elections for more than a dozen years.

Rawan al-Rantissi, 22, a student at Al-Azhar University in Gaza City, told Al-Monitor, “Many students at the university were happy with the president's announcement of holding general elections. They saw this as their chance to change the ruling class.” She added, however, “I will not vote for any political party; our 13-year-long experience of political conflicts made us hate all of them.”

Ihab al-Najjar, a 47-year-old construction worker, told Al-Monitor that he would not participate in any upcoming presidential or legislative elections. “What have the parties we elected previously done for us? Absolutely Nothing! Two of my sons graduated from university and are still unemployed. Government jobs are only for those affiliated with political parties.”

Undoubtedly, the Palestinian political parties have been galvanizing their supporters into organizing their ranks for the elections in a bid to secure a victory. But the aspirations of rival factions, most notably Hamas and Fatah — which represent the poles of the political arena — for a comfortable victory in those elections is forcing them to work hard to change the minds of citizens who do not plan to vote.

He said Hamas has institutions conducting surveys on a monthly basis to gauge the mood of the Palestinian public, especially how much voters would support Hamas in any future elections. He added that according to the polls, Hamas enjoys great popularity, whereas Fatah has little support given its internal conflicts that have been ongoing for years across the Palestinian territories.

Fatah leader Abdullah Abdullah also questioned the polls’ results. “Many of the polled gave fake answers. This does not override the existence of a state of anger in the Palestinian street against the parties and their performance over the last decade,” he told Al-Monitor.

Abdullah stressed that his movement is well aware of the great effort it has to make prior to the elections in order to gain wide support. He said he believes that Fatah will beat Hamas and other parties in the upcoming elections.

According to Birzeit University media professor Nashaat al-Aqtash, the results of the polls issued by the Palestinian survey centers are accurate and reflect the mood of the Palestinian street. He told Al-Monitor that these polls’ results could change if a significant number of respondents who currently refuse to participate in the elections change their minds.

But it seems more likely that the results of the polls will hold true, as wide segments of Palestinian society have been bearing the brunt of the internal division between Fatah and Hamas.