A US shift on settlements comes after European court decision on labeling settlement products. 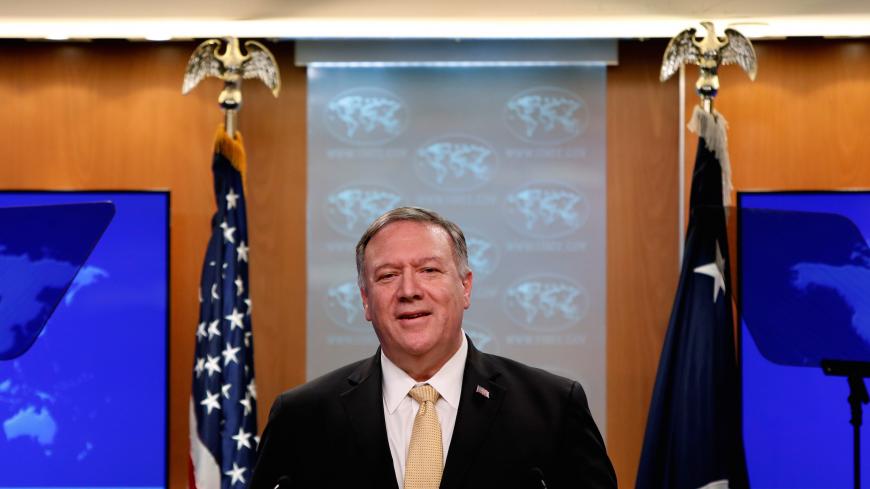 US Secretary of State Mike Pompeo delivers a statement on the Trump administration's position on Israeli settlements in the occupied West Bank during a news briefing at the State Department in Washington, Nov. 18, 2019. - REUTERS/Yara Nardi

Secretary of State Mike Pompeo announced today that the US government will no longer hold the position that settlements built in the West Bank are necessarily illegal, saying the decision recognizes reality on the ground.

“The establishment of Israeli civilian settlements is not per se inconsistent with international law,” Pompeo told journalists at a news conference at the State Department.

Pompeo insisted that the timing of the announcement was not meant to give a boost to Israeli Prime Minister Benjamin Netanyahu as he watches to see if his rival Benny Gantz is able to form an Israeli governing coalition or to distract from impeachment proceedings in Washington, but was based only on the conclusion of a comprehensive legal review conducted by administration lawyers. Pompeo also rejected any assertion that the decision could have a negative impact on the ability to reach a two-state deal.

“We believe that what we’ve done today is we have recognized the reality on the ground,” Pompeo said. “We’ve now declared that settlements are not per se illegal under international law, and we have provided the very space … for Israel and the Palestinians to come together to find a political solution to this very, very vexing problem.”

But some veteran observers of the Middle East peace process suggested the timing of the announcement could be linked to the ruling last week by a European court on the labeling of goods from Israeli settlements. The Luxembourg-based European Court of Justice ruled that products from territory occupied by Israel must be labeled as such.

“I don’t think it is a coincidence that this is happening days after the European Court of Justice ruling on labeling,” Lara Friedman, executive director of the Foundation for Middle East Peace, told Al-Monitor from Tel Aviv today. “That is clear.”

“The substantive impact will depend on what flesh we put on the bones” of the decision, Friedman continued. “The President, the State Department can tell Customs and Border to change our policy on labeling [of goods produced from the settlements].”

For Netanyahu and his Trump administration allies, including US Ambassador to Israel David Friedman, the timing of the announcement could have been seen as a matter of “now or never,” suggested former State Department Middle East peace process official David Makovsky.

“On the timing, I can only speculate … that this is something that might have been in the works between Ambassador Friedman and Prime Minister Netanyahu for months, and it might have been a ‘now or never’ quality,” Makovsky, now with the Washington Institute for Near East Policy, told Al-Monitor. “Because there could be a shift in the government in Israel.”

Friedman praised the Trump administration decision, which he said would advance the cause of peace.

“After commissioning a lengthy and comprehensive review of the issues, Secretary Pompeo has concluded that Israeli civilian settlements in Judea and Samaria are not categorically illegal,” Friedman wrote on Twitter. “My thanks to @POTUS and @SecPompeo for their important work which will advance the cause of peace by creating an appropriate level playing field for future talks.”

Both Netanyahu and Blue and White party leader Gantz praised the US decision, which was condemned by the Palestinian Authority.

It “rights a historical wrong,” Netanyahu said in a statement, adding that Israel “will continue to reject all arguments regarding the illegality of the settlements.”

Gantz said in a statement, “The fate of the settlements and the residents of Judea and Samaria should be determined by agreements that meet security requirements and that can promote peace.”

The Palestinian Authority said in a statement, “The US administration has completely lost credibility and can no longer play any role in the peace process.”

The US decision “is also likely a preemptive move for an imminent ICC [International Criminal Court] ruling, to be taken by December 2nd, regarding whether Israeli settlements amount to war crimes according to international law,” Ofer Zalzberg, an Israel analyst with the International Crisis Group, wrote on Twitter.

Politically, the decision “widens the gap” between Israeli right and center parties, the Trump administration and US evangelicals on the one hand, and pretty much everyone else on the other, Zalzberg said. That eroding consensus means, he said, that a “consensual, durable resolution is only getting harder.”

David Halperin, executive director of the centrist Israel Policy Forum, said the decision may not have much impact because the Trump administration has already departed so far from playing a constructive role on the peace process.

“It is hard to tell in this particular instance if there is any strategy going on here whatsoever, or merely short-term point scoring or changing the media narrative,” Halperin told Al-Monitor. “The ultimate impact is going to be rather marginal.”

“The US already removed itself from playing a constructive role in the peace process let alone in reaching the ultimate deal,” Halperin said. “This only reinforces that reality. I certainly do not think it changes the international community view on settlements. It obviously raises concerns with the Palestinians and Jordanians at the moment. It does not defuse tensions.”

Nimrod Novik, a former foreign policy adviser to the late Israeli leader Shimon Peres, said in effect that Israel needs to be protected from its friends. "We are strong enough to deter and defeat enemies. What we don't have is an Iron Dome system to defend us from friends who threaten to end the Zionist vision,” Novik, a fellow with the Israel Policy Forum, said in a statement. “This David Friedman administration keeps empowering our Messianic, annexationist minority. If not stopped, Israel may face the existential threat of losing its Jewish majority and democracy."