As at this time there is a slim chance for a minority government supported by the Arab Joint List, Yisrael Beitenu leader Avigdor Liberman’s base accepts the moderate and unusual stance of the party regarding such a government. 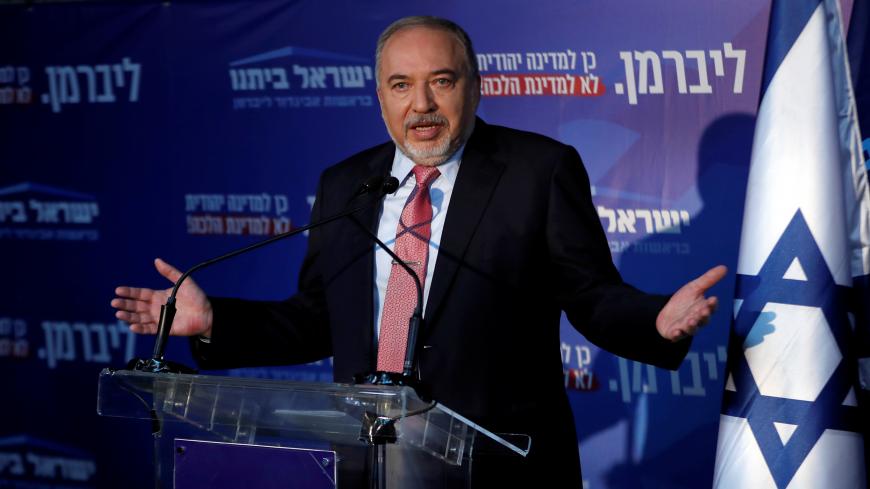 In a few weeks, the strangest, perhaps even most dramatic, year in the history of Israeli politics will come to an end. Who would have believed at the end of 2018 when Yisrael Beitenu leader Avigdor Liberman resigned from the Defense Ministry that in 12 months Israel would still be without a government? Who would have guessed that the Arab Joint List would recommend Blue and White leader Benny Gantz to form a government? And who would have imagined that there would be a possibility, at least theoretically, for a narrow center-left government with some kind of support of Yisrael Beitenu and the Joint List, with large segments of the Israeli public believing that it's a realistic option?

The man responsible to a large extent for this political knot and some of these moves is none other than Liberman, the chairman of Yisrael Beitenu, a party that for years has consistently voted against legislation that would advance the rights of LGBTQ citizens and whose leader is known for his racist views toward Israeli Arab citizens. And here, within a few months, the Arabs who had always been marked by Liberman as “traitors” and worthy of boycott have nearly turned into partners in the formation of a government headed by Gantz. And here, Knesset member Osama Saadi (Joint List) told journalist Nir Gontarz in Haaretz that he met with Knesset member Eli Avidar, who in June this year was the first member of Knesset from Yisrael Beitenu to participate in a pride march (in Jerusalem). In addition, Yisrael Beitenu has for the first time submitted a bill to establish civil marriage in Israel that includes LGBTQ couples.

This week, Knesset member Oded Forer of Yisrael Beitenu and Knesset member Mansour Abbas of the Joint List, who is also the chairman of Raam, were interviewed on the same radio program on the army radio station. The former was not willing to say explicitly that his party would not sit with the Joint List in the same government, and the latter did not reject cooperation with Liberman.

So, what does Liberman’s base think about this moderate and unusual stance? Do his supporters also adopt the new positions of the man who had become the kingmaker in Israeli politics?

“The Arabs who would enter the government are not so dangerous. At least they don’t force anyone to live under their laws,” wrote Elena Goroshnik, a Yisrael Beitenu supporter, in response to an article published two weeks before the last election by the Likud on a Channel 9 website — an Israeli Russian-language channel. Other commenters, who said they are Yisrael Beitenu supporters, wrote similar things. “A government like that is preferable to an unenlightened government led by Bibiyahu [reference to Prime Minister Benjamin Netanyahu],” another commenter, Yakov Duhovny, wrote. They have written such sentiments even more so after the election. Paradoxically, in the web battles happening now on politicians’ pages, Yisrael Beitenu supporters “explain” to Netanyahu supporters that Arab Israelis are not the greatest danger to the State of Israel. And when Likud voters accuse them of turning into “leftists,” they flood the web with photos of Netanyahu and PLO leader Yasser Arafat, and with Netanyahu’s promise to take down Hamas. In fact, by publishing Netanyahu’s photos they act exactly like leftist activists who have been featuring these photos of Netanyahu on social networks whenever he criticized them of meeting with Arafat or with Palestinian President Mahmoud Abbas.

Evgenya Shwartz, a Ramat Gan resident who emigrated from Belarus in the early 1990s, has voted for Liberman since he created his party. She also believes that at this stage the most significant danger for the state is religious coercion and Israel becoming a state governed by Jewish law. “I don’t believe that a narrow government with the support of the Arab parties will be established in the end, because this isn’t what Avigdor Liberman wants,” she told Al-Monitor. “Liberman said that he is interested in advancing a liberal unity government. But this doesn’t mean that Arab citizens in Israel are not legitimate. They at least pay taxes, work and teach their children English and math, unlike the ultra-Orthodox." She doesn’t see any contradiction between Liberman’s current position and his harsh statements toward Israeli Arab citizens and their representatives in the Knesset.

Emil Shleymovich, chief editor of the Russian-language news portal Datali, estimates that at least 4-5 mandates from Liberman’s core voters would follow him in any situation and support him. “There’s another mandate that is wavering that could change its mind relating to Liberman, but now they don’t know which way to go,” he told Al-Monitor. “All the rest stick with him through thick and thin. Since most of his voters are older, it’s hard for me to believe that they would change their negative view of Arabs or LGBTQ citizens. Many of them think that all of Netanyahu’s accusations toward Liberman are lies. Others justify the change in positions as a political necessity. In either case, they don’t see it as a change in positions.”

Alexander Vilensky, news editor at Channel 9, also tends to think that the public’s views will not change so fast on these key issues. “Liberman is an experienced politician, cunning and very talented. He projects confidence and calm and until now he had an answer for everything. When his Knesset member Eli Avidar participates in a gay pride parade or meets with Arab Knesset members, this is also a brilliant move. Thus he can convince secular voters who aren’t in his base that he is for a liberal agenda, that he certainly doesn’t think all Arabs are the enemy. And he is still considered someone who stands behind his word among his loyal supporters,” Vilensky told Al-Monitor.

Dahlia Scheindlin, a strategic consultant and research associate in the Mitvim Institute, told Al-Monitor that even if the change happens slowly, it is still happening. She noted, “There are comments [amid Yisrael Beitenu’s people] about the possibility of a minority government with the support of the Joint List and that it’s not a disaster. A change in positions takes time, so it doesn’t yet trickle down [to the public] to an extent that there is support for this. In April we checked [the level of support] for the website 'Local Conversation' and then only a third of Jews said they could accept the formation of such a government. As an experienced pollster, I can guess that if in the coming years we will not return to such an option, there would be a retreat from this too.”

At this stage it’s hard to predict to what extent the unusual political situation and Liberman and his associates’ uncharacteristic statements or silences could influence their voters’ key positions. At the same time, we can’t deny the sense that there is now an unusual window of opportunity for a change in regime, even if it’s a result of political constraints that overtake the personal leanings of politicians like Liberman.