Could Netanyahu be pardoned in exchange for quitting politics?

Instead of seeking an immunity law, Prime Minister Benjamin Netanyahu might explore the possibility of a pardon deal, in exchange for exiting Israel’s political life. 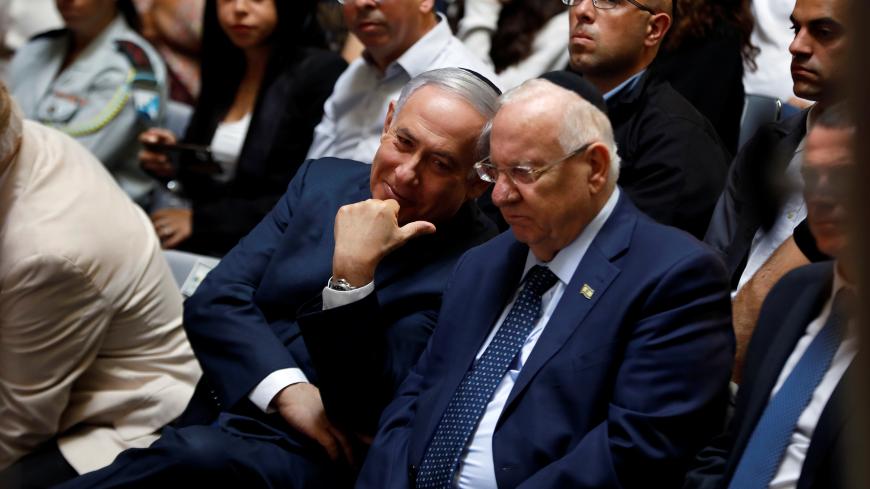 If the Channel 13 News poll aired Nov. 10 is anything to go by, the balance of power between Israel’s liberal and conservative voting blocs would remain largely unchanged from the two elections this year if a third round of balloting was held in early 2020. The equivalent of 57 Knesset seats for the center-left parties and 54 for the right-wing, ultra-Orthodox parties, as suggested in the poll results, would leave the deciding votes in the hands of Yisrael Beitenu Chair Avigdor Liberman, whose party would get nine seats in the 120-member legislature — one more than in the September elections. Nonetheless, the poll does not reflect the impact of possible corruption indictments against Prime Minister Benjamin Netanyahu. It stands to reason that the status of an indicted prime minister — if Attorney General Avichai Mandelblit does, indeed, decide in the coming weeks to indict him — would not improve the chances of Netanyahu’s Likud party at the ballot box.

Having failed in strenuous efforts to cull the support of a 61-seat Knesset majority to advance proposed legislation granting him immunity from prosecution, Netanyahu’s last resort in a bid to avoid facing a courtroom would be requesting a pardon from President Reuven Rivlin, pending the recommendation of the attorney general. A knowledgeable source close to the senior echelons of the state prosecutor’s office suggested this week in a conversation with Al-Monitor not to attach much credibility to the determined denials of such a possibility emanating from the prime minister’s office.

Proponents of the pardon option point to the precedent set by the 1986 pardon of the Shin Bet security agents, who executed two terrorists that had hijacked bus 300 in 1984. Casting the blame on Maj. Gen. (Res.) Yitzhak Mordechai, they misled a commission. Also, under the deal between then-Attorney General Yosef Harish and President Chaim Herzog, head of the Shin Bet Avraham Shalom stepped down. Other agents were granted a pardon and were saved a trial after admitting guilt and assuming responsibility for their actions. The fact that leading Israeli attorney Ram Caspi, who represented the Shin Bet agents at the time, is a member of Netanyahu’s defense team, lends credence to reports of contacts underway over a similar deal.

Michael Ben-Yair, who served as attorney general under Prime Minister Yitzhak Rabin (1992-95), told Al-Monitor he doubted the deal over the bus 300 affair could serve as a precedent for granting Netanyahu an a priori pardon. “In that case, the cause for the decision was safeguarding state security,” said the leading jurist. “Whereas in the Netanyahu case, there is no such cause.” Ben-Yair assumes that in the case of Netanyahu, the deal at hand would be him quitting political life in exchange for the attorney general closing the files against him. But for him, such a solution does not make sense, “certainly not at this stage of preparations for an indictment.”

As was the case with the bus affair, granting the prime minister a pardon in return for an admission of guilt and resignation would likely face a Supreme Court challenge. In rejecting a petition against the president’s pardon of the Shin Bet agents, the chief justice at the time, Meir Shamgar, wrote that “only completely unusual circumstances, which raise a paramount public interest or very extreme personal circumstances, and which do not offer any other reasonable solution, can justify a priori intervention [of this kind].” Shamgar also wrote that the president is authorized to grant a pre-trial pardon, noting that “the rule of law, the public interest … are not contradictory or clashing terms, but rather complement each other.” His ruling could underpin an argument that Netanyahu’s resignation is a paramount national interest because by stepping down, he would be bringing to an end the prolonged political instability making it hard for Israel to deal with the weighty security and economic challenges it faces.

Opponents of the deal cite the minority opinion in the bus affair of Justice Aharon Barak, in later years the chief justice, who wrote that every accused must undergo the proscribed legal process culminating in a verdict, and only then can a decision be made whether a pardon is worthy or not. Haifa University law professor Jonathan Yovel expressed a similar view in an article titled, “On Immunity and Pardon: An Anatomy of Normative Concepts.” Those requesting the pardon in the bus 300 affair “admitted” to the charges against them and were thus considered “convicted” of the crimes, he wrote. However, he added, not in the eyes of the criminal court that had been stripped of its authority to adjudicate in the case but by a low-level “legal system created by the architects, or rather by the scriptwriters of that miserable 'pardon.'" The pardon granted to the Shin Bet agents, Yoval added, “[was] a travesty of the due process, leaving only its ceremonial and symbolic elements intact.” In granting the pardon, he wrote, the president represented “an extra-judicial tribunal.” The process by which the police force, prosecution and courts are stripped of their authority to charge and try a suspect is not a pardon, but rather the creation of immunity after the fact, according to Yovel.

The October 2019 "Israel Voice Index," a monthly survey conducted by the Guttman Center for Public Opinion and Policy Research at the Israel Democracy Institute, suggests that the Israeli public, too, is divided over a resignation pardon deal, with 52% of those polled opposed to the state offering Netanyahu a plea deal, according to which he would admit to the charges against him and walk away from public life in return for avoiding a trial. Professor Tamar Hermann, who compiles the surveys, noted that such a move was met with broad opposition not only on the political left, which views it as a travesty of the justice system and wants to see Netanyahu on the stand. Those on the right who believe in Netanyahu’s innocence also oppose such a deal as well as his exile from the political arena. Either way, 64% of those surveyed prefer a national unity government comprised of Netanyahu’s Likud and the opposition Blue and White party rather than being subjected to a third election (an option favored only by 15%) — almost like having Netanyahu and rejecting him at the same time.