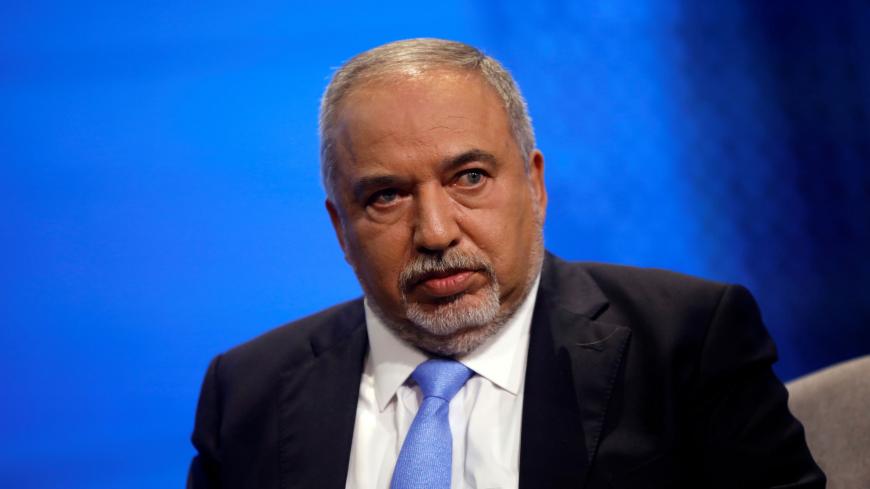 Avigdor Lieberman, head of the Yisrael Beitenu party, addresses a conference in Tel Aviv, Israel, on Sept. 5, 2019, ahead of the Sept. 17 elections. - REUTERS/Nir Elias

About a month before this year's second round of elections, senior leaders of the Blue and White party made a point of announcing from every possible platform that they were certain that a mutiny in the Likud was only a matter of time, and that Prime Minister Benjamin Netanyahu would be removed as chairman of the Likud immediately after the election, with someone else taking over for him. The impetus behind this idea was the Blue and White party’s No. 2 candidate, Yair Lapid. His notion sounded convincing enough to create political and media buzz.

“The mutiny in the Likud has already begun,” Lapid said resolutely in an interview with the Walla News website in the first week of August. He supported his remarks with insider information, saying, “Senior Likud officials have been talking to me about it by phone. … We know the truth. The mutiny in the Likud has already begun. … They will not go to a third round of elections just because Netanyahu wants immunity from the indictments facing him. If there is a deadlock, we will have the good sense to form a unity government made up of the Blue and White party without Netanyahu but with [Yisrael Beitenu leader Avigdor] Liberman.”

Lapid’s insistence on this wasn’t some kind of spin. He was voicing a conclusion based on various political and legal assessments, which claimed that Netanyahu would be unable to withstand either the indictments or a political and media tsunami depicting him as the only obstacle blocking the creation of a unity government.

Anyone looking for further evidence of this could find it in remarks made by Liberman just before the Sept. 12 election. “If he [Netanyahu] fails to garner 61 people to recommend the Likud, he will be replaced that very evening,” Liberman predicted. Liberman, a former Likud member himself, insinuated that he has reason to believe that Netanyahu’s days in the Likud would be nearing their end if the prime minister failed to deliver the goods. The close relationship between Liberman and Lapid fed the sense that a mutiny in the Likud was right around the corner. And yet, so far, that mutiny has failed to break out.

On the day, Nov. 20, that Blue and White party Chairman Benny Gantz returned his mandate to form a government — failing to form a broad, liberal unity government or one of any kind — it is time to start talking about how various ideas that pervaded the Blue and White leadership fell apart. These ideas seem to have been based more on wishful thinking and the belief that market forces would work in their favor. In other words, as pressure intensified with the increasing likelihood of a third round of elections, Netanyahu would have his back to the wall, and the safety net surrounding him would tear. What the Blue and White leaders failed to understand — perhaps because they couldn’t understand — is the Gordian-like knot tying Netanyahu to his electorate.

The Blue and White party did not appreciate how pervasive party loyalty is in the Likud. While Blue and White leaders spoke about an impending “mutiny” and claimed to know “what is really happening in the party,” the sentiment that got the Likud to rally around Netanyahu actually intensified. Disparaging comments such as those made by Lapid and Gantz only helped Netanyahu bolster his position, particularly after the Likud won 32 seats under his leadership. Furthermore, Likud supporters really didn’t like the idea that a rival party would act so patronizingly toward them and try to determine their choice of leader.

The clearest sign that the concept advocated by the Blue and White party had failed began with a defiant tweet by Likud senior official Gideon Saar to Netanyahu after Netanyahu said he planned to hold a party leadership primary. By tweeting “I’m ready,” Saar seemed to be saying that the war over the inheritance had already begun and that a contest to decide the party’s leadership was imminent. But while Blue and White celebrated, Saar quickly realized that he lacked the backing within the Likud to initiate such a move. While Netanyahu did climb off his high horse and stepped back from his plans to hold a Likud primary (seeming very nervous and scared about the whole idea), the bottom line is that he got what he wanted.

In a conversation with Al-Monitor this week, one senior Blue and White official admitted on condition of anonymity that the party operated on the basis of several faulty assumptions, which eventually fell apart and shattered into pieces. If the first was the belief that there would be a mutiny in the Likud, the second was a failure to understand the strength of the bond within the Likud's 55-seat coalition. If anything, the Blue and White party tended to ridicule the right-wing bloc’s cohesion in the belief that when the moment of truth arrived, the ultra-Orthodox would abandon Netanyahu. Blue and White also tried to forge some kind of connection with Naftali Bennett and Ayelet Shaked of the New Right, hoping to break their alliance with Netanyahu. At one point, Blue and White even tried to recruit Likud party backbenchers. In the end, all these efforts failed.

The third assumption that came crashing down, at least for now, was that Netanyahu would be removed as leader of the Likud because of the indictments he is facing. Though Attorney General Avichai Mandelblit’s decision on the matter has yet to be released, this reasonable assumption does not correspond with the realpolitik pervasive in the ruling party. In fact, the situation is quite the opposite. As the legal noose tightens around Netanyahu, he is using it as leverage for a campaign claiming that he is being hounded and mistreated. Such a campaign only bolsters his standing among Likud central committee members and voters, and as a result, among members of the Knesset’s party faction too.

A fourth assumption that came toppling down is the idea of a minority government with Liberman and with the support of the Arab parties. Here, too, Lapid was the motivating spirit behind this idea, this time by convincing party leadership that Liberman was on his side. This move was serious and served, if only indirectly, as a scourge when dealing with the Likud by giving the impression that there was a real option of forming a government without Netanyahu's party. Blue and White believed that this would help them bring an end to Netanyahu’s rule.

But once again, the exact opposite occurred. Even Likud Central Committee members who supported Saar rallied around Netanyahu with greater zeal, using their WhatsApp forums to make it perfectly clear that under such conditions, it would be an honor for them to occupy the opposition benches. On the other hand, the scenario did keep Netanyahu awake at night. He did everything he could to prevent it, not least by launching an incendiary and violent campaign against the Arab members of Knesset.

Actually, Netanyahu fought back against any threat, real or imagined. He strengthened and supported his 55-seat bloc practically 24/7, made Likud Knesset members sign oaths of allegiance to him, appointed Bennett to be his defense minister and invited Saar to a private meeting. This week, he informed the party’s Knesset faction that if there is a third round of elections, there would be no party primaries, so as to prevent thoughts of defection, if any, particularly among Knesset members from the bottom of the list.

Could the Blue and White party have done anything differently? It is not at all certain it could have. As one senior party member told Al-Monitor on condition of anonymity, “Gantz made a strategic decision not to break the Blue and White party apart.” What this means is that as long as [Blue and White senior leaders] Lapid, Moshe Ya’alon and Gabi Ashkenazi veto the possibility of sitting in a government with Netanyahu while he is under indictment, Gantz will remain loyal to the party, while hoping that something dramatic does, in fact, happen in the Likud.