Senior Likud leaders stick with Netanyahu by hook or by crook

All senior Likud leaders, including those who consider themselves candidates to succeed Prime Minister Benjamin Netanyahu, are sticking with him. 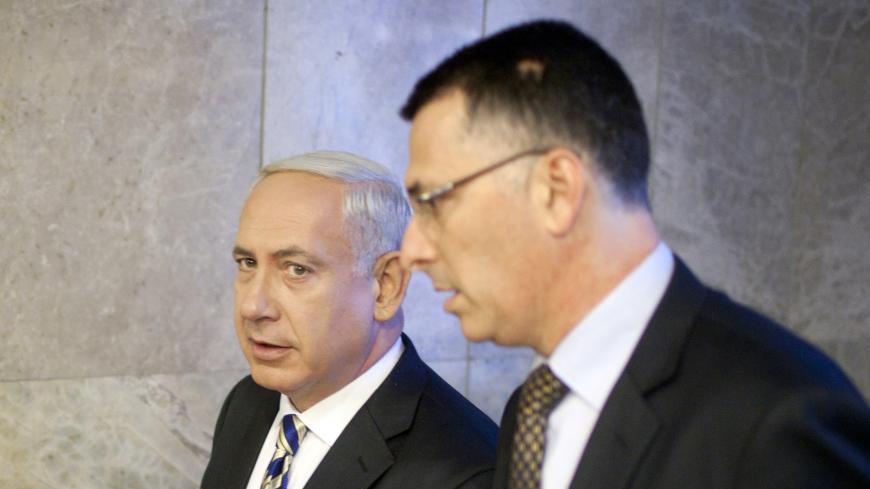 Israeli Prime Minister Benjamin Netanyahu (L) and Gideon Saar arrive for the weekly Cabinet meeting in Jerusalem, Aug. 26, 2012. Senior Likud leaders, including Saar, who was education minister when this photo was taken, have steered clear of any challenge to Netanyahu despite his legal problems. - REUTERS/Uriel Sinai/Pool

The permanent and common mantra of the center-left parties in the 2019 elections — in the first round in April and the second round Sept. 17 — is “Just not Netanyahu.” The rejection is personal, with the main reason being of course the pending indictments against Prime Minister Benjamin Netanyahu and their real potential to become criminal convictions. But there’s also another reason, a hidden one, and that is their wish to be rid of someone reigning as prime minister from the right for more than 10 years straight after he led the Likud to victories over the center-left camp in three elections. The Israeli electoral system does not limit the number of terms for premiership.

At least two of those parties, Blue and White and Labor-Gesher, reject only Netanyahu and not the Likud; both are willing to sit alongside the Likud, minus Netanyahu, in a coalition. But no one in the Likud has picked up the gauntlet and acted to oppose Netanyahu. The current mood among the party’s leaders also indicates they also wouldn't do so after the election if Netanyahu again fails to form a coalition, even at the price of losing control of the government in the case that Blue and White does manage to form a coalition.

The chairman of Labor-Gesher, Amir Peretz, recently shaved off his mustache, which was his trademark, just to bolster faith in his declaration of “Just not Netanyahu.” Peretz made sure to emphasize that he doesn’t reject the Likud as a partner party in a coalition. In Blue and White this statement is much more explicit, where the main goal is establishing a unity government — without Netanyahu.

The latest polls show that a potential Likud coalition would win 57 to 60 seats; with these numbers Netanyahu would not have a right-ultra-Orthodox government. Most polls predict a similar number of seats for a potential coalition that would be formed by Blue and White, which is hoping for a unity government with the Likud. Some of the Blue and White's people share a common language with the Likud. Former Defense Minister Moshe Ya’alon belonged to the Likud; Knesset member Yoaz Handel was the head of Netanyahu’s public information bureau; Knesset member Zvi Hauser was Netanyahu's government secretary. They would be happy to reconnect with the Likud, but haven’t succeeded in convincing current senior Likud leaders to act to replace Netanyahu.

Hauser told Al-Monitor, “There’s a reign of fear in the Likud that invalidates the whole democratic process.” He said the Likud once was an organization where leaders such as Menachem Begin and Yitzhak Shamir cultivated generations of young leadership, but has now become a one-man party where Netanyahu pushes out any leader who has potential to replace him, “and the list is long.”

In the meantime, within the party, there’s no sign of a coup or anything that approaches it. The potential candidates to succeed Netanyahu when the day comes declare that they would do so only after he resigns. So, for instance, Minister Israel Katz, who said in April 2017: “On the day Netanyahu ends his term I intend to run to lead the Likud.” Or in the words of Regional Cooperation Minister Tzachi Hanegbi on a satirical television show: Whoever declares his intention to lead the Likud right now will be “marked with an X.”

This expression attests to Netanyahu’s tight control over Likud institutions. None of the other candidates has a chance of beating Netanyahu, not in the Likud Center, which numbers 3,000 people, and not among registered Likud members, who number about 120,000. Thus they won’t dare go into a losing battle and are very careful when they speak about Netanyahu. The clearest example for this is Knesset member Gideon Saar, who is considered a prominent candidate to succeed Netanyahu, and who holds more liberal views. Saar is especially careful to avoid any mention whatsoever of the possibility of replacing Netanyahu, because of his previous conflicts with the prime minister. While Saar's standing in the Likud is strong, he, too, can’t stand up to the power of Netanyahu supporters if he even shows a sign that he supports the prime minister's ouster.

Arik Ziv, a veteran Likud man and editor of the popular website Likudnik, told Al-Monitor that the support for the leader is in the DNA of the Likud, as opposed to other parties' this is loyalty that some would call blind, but that he sees as part of the Likud’s strength and its success. Ziv said that in the Labor Party even someone who succeeds — such as Isaac Herzog, who got 24 seats in the 2015 election — was ousted.

Concerning the criminal charges against the prime minister, Ziv, like many others in the Likud, believes that this is a conspiracy against Netanyahu with the aim of ousting him. The public criticism of Netanyahu for his legitimization of Otzma Yehudit (Jewish Power), the party of the racist Rabbi Meir Kahane’s successors, has not caught on in the Likud. Ziv points to Blue and White leader Benny Gantz and other leaders of the center-left, who are willing, he claims, to depend on the non-Zionist Arab Joint List to form a coalition, and so Netanyahu is also allowed to depend on a party on the right.

There is another, fundamental reason why Likud supporters cling to Netanyahu. Ziv said that aside from admiration for Netanyahu's diplomatic achievements around the world, the prime minister is considered the most successful and powerful politician here, one the left cannot overcome, while his potential successors have not yet proven themselves.