Iran's supreme leader says that a security "conspiracy" has been defeated after a heavy-handed crackdown crushed nationwide protests against gasoline price hikes. 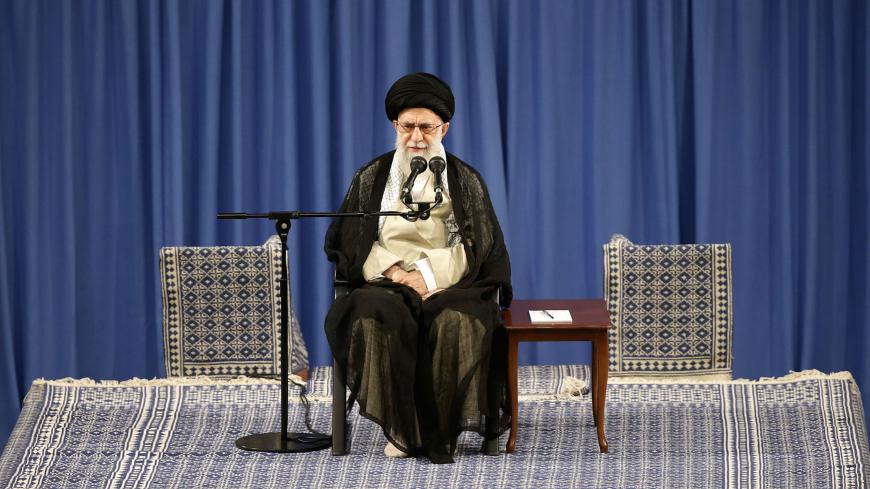 Iran's Supreme Leader Ayatollah Ali Khamenei is seated at an event in Tehran where he met with officials from Iran’s hajj organization, July 3, 2019. - Khamenei.ir

"Let all friends and foes know that we pushed back the enemy in the recent security war," Iran's Supreme Leader Ayatollah Ali Khamenei declared in a speech Nov. 19. Khamenei was referring to a wave of deadly demonstrations that has gripped the Islamic Republic since last Friday after an overnight announcement of higher gasoline prices and a contentious rationing scheme.

The protests, according to Khamenei, were not the "people's job" but a "security" conspiracy now thwarted. The 80-year-old leader added that his country will experience the same victory in the "economic war" — a recurrent term in Iranian official discourse describing US sanctions that have drastically dwindled ordinary Iranians' purchasing power.

An equally triumphant tone dominated Nov. 20 remarks by President Hassan Rouhani, who referred to some protesters as "a small group of enemy soldiers" who acted against "Iran's national security." Rouhani also hailed "spontaneous rallies" against the "thugs." Iran's hard-line media outlets and state TV gave extensive coverage to those rallies held in the cities of Tabriz, Zanjan, Hamedan and Shahr-e-Kord, where crowds gathered to "extinguish the flames ignited by thugs." Traditionally, in the aftermath of past anti-government protests the Islamic Republic has mobilized supporters in such counter rallies, most notably in 2009, when a disputed presidential vote sparked mass demonstrations across the country.

The Iranian leadership's declaration of an end to the protests contrasted with ongoing restrictions and beefed-up security in many cities. As of Nov. 20, ordinary Iranians were largely disconnected from the digital world, with their access limited to a government-controlled intranet that kept them within of a domestic circuit of Iran-based websites. International search engines and email providers were out of service. Several public universities, which served as key venues for the recent protests, remained closed and at least four matches in Iran's soccer premier league — normally drawing massive crowds of fans—were called off due to "lack of proper gaming conditions."

While an official death toll from the protests has yet to be released, an Amnesty International report has highlighted the government's use of "excessive force" that has left at least "106 protesters dead in 21 cities."

In defense of his government's austerity plan, Rouhani has repeatedly noted that the gasoline subsidies will benefit members of the lower class by ending up as cash in "their pockets." Many have challenged the assertion, among them Habibollah Keshtzar, a lawmaker representing his impoverished southwestern constituency of Behbahan, where many deaths by live fire have been reported.

"Instead of squeezing your hands in people's pockets, you could have saved money by curbing budget wastefulness, ending unnecessary costly trips abroad and combating extravagance by some members of your administration," he said Nov. 19 in a sharply-worded parliamentary address. Keshtzar also lamented the plight of "the needy who yearn for bread" and have to "pay the price" of the Rouhani government's new scheme.