Iranian media seems to be preparing public for clampdown on protests

The IRGC issued a statement warning that continued unrest would result in a firm confrontation. 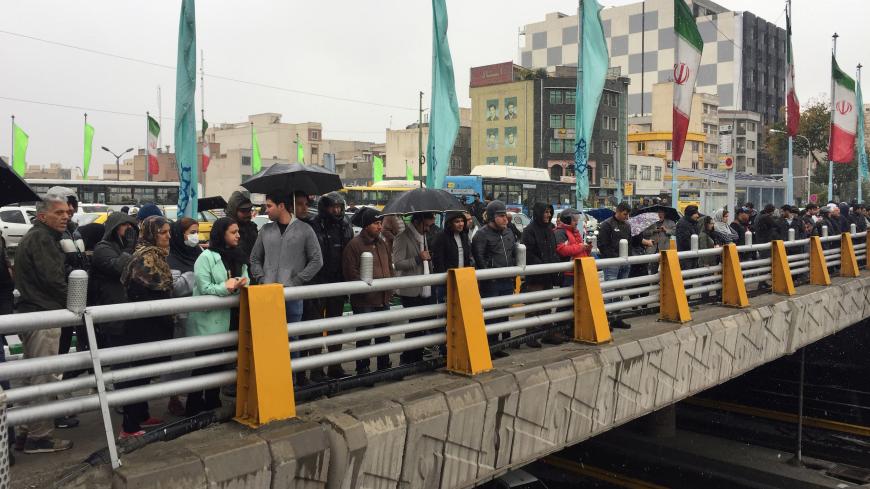 Though protests in Iran over a gasoline price hike due to subsidy reductions appear to have slowed down, they continued for a fourth day Nov. 18. Meanwhile, internet in the country was nearly completely shut down for a fourth straight day as well, restricting the information traveling to and from the country regarding the size of the protests and the number injured or killed. However, the protests were still large enough that the Islamic Revolutionary Guard Corps (IRGC) felt the need to issue a statement.

The Nov. 18 IRGC statement praised the protesters who had separated themselves from “thugs and charlatans” in the streets. Echoing comments by Supreme Leader Ayatollah Ali Khamenei, the statement accused the Mujahedeen-e-Khalq and members of the Pahlavi monarchy from the pre-Revolution government of instigating protests. The statement continued that “any type of continued unrest and actions that undermine the calm and peace of the people will be confronted firmly.”

Given that higher gasoline prices would impact the lower economic classes the most, the IRGC statement was careful not to dismiss the protests outright; the six-paragraph statement praised “the people” for their “wisdom” in not falling for the enemy’s traps. The statement suggested that if security services decide to heavily confront any protests, the services will likely claim that the remaining protesters are from armed groups hostile to the government rather than ordinary citizens.

Fars News reported that Javad Karim Ghodousi, a member of Iran’s powerful foreign policy and national security commission, said the secretary of the Supreme National Security Council had claimed that members of the Mujahedeen-e-Khalq were active in the protests and have been arrested. Another Fars News headline, perhaps preparing the argument for a heavy clampdown by security forces, read, “The people have left, thugs and anti-revolutionaries remain.”

As the IRGC statement demonstrates, the government’s response has been twofold. On the one hand, authorities want to distinguish between nonviolent protesters from those causing damage to property, while simultaneously reassuring the lower economic classes that reductions in the gasoline subsidy would result in more cash subsidies for the poor.

Ali Rabiei, the spokesman for the Hassan Rouhani administration, has been the public face for reassuring the public that the lower economic classes would receive greater cash subsidies. At a press conference Nov. 18, Rabiei said the entirety of the money saved from the reduction in the gasoline subsidy would be spent on lower economic groups. “A policy of justness and equity lies at the heart of this plan,” Rabiei told reporters, claiming that the three branches of government held three separate meetings to come up with the plan. He added that the reduction in the subsidy would reduce the smuggling of oil to other countries, saying, “Why should we pay to subsidize oil in other countries too?”

Addressing the protests, Rabiei said, “Unfortunately some caused a riot in response to this bill and attacked infrastructure, private and public property.” He said some individuals had brought arms, resulting in the death of a police officer. Government officials have not given a tally of the number of deaths as a result of the protests.