An outspoken Iranian lawmaker is pushing legislation that would abolish the state broadcaster's controversial tradition of airing forced confessions. 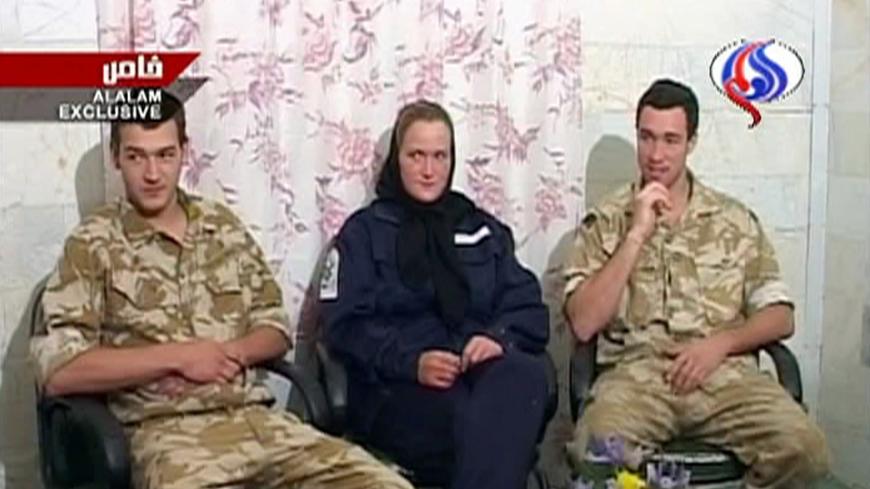 A screenshot from Iranian state TV shows three of 15 captured British sailors and marines, one of which allegedly confessed to entering Iranian waters illegally and apologized to the Iranian people, March 30, 2007. - REUTERS/Al Alam Television

In the past four decades, Iran's intelligence organizations and the like-minded state broadcaster have aired many "confessions" by individuals detained over "security" charges. One outspoken lawmaker is now pushing legislation that could abolish the controversial practice.

The proposed legislation on the "prohibition of recording and airing of detainee confessions from the state broadcaster" was officially taken up by the Iranian parliament Nov. 4.

The bill's architect is Mahmoud Sadeghi, an outspoken parliamentarian from the Reformist camp. Already under fire by hard-liners over his efforts to counter corruption and audacious remarks challenging the powerful elites, Sadeghi is now coming at them even harder by targeting a tradition they have practiced and defended for decades.

The proposed legislation, signed by some 70 lawmakers, is in deliberation in parliamentary commissions before it will find its way to the floor for ratification. It criminalizes the broadcast of confessions "at any stage" of an investigation and calls for a jail sentence of up to three years for those involved.

The emergence of a rich political landscape characterized by a plethora of active parties with differing approaches toward governance in the aftermath of the 1979 Islamic Revolution triggered a harsh crackdown by the Islamic Republic on all forces whose activities were deemed "anti-revolutionary." A large number of opposition leaders and activists were consequently shown on state TV confessing to charges ranging from plotting assassinations to receiving funds from adversary states.

Despite drawing widespread criticism, the tradition has continued ever since. It was implemented with greater vigor following the disputed 2009 presidential election that saw hard-line Mahmoud Ahmadinejad re-elected and sent the country into months of disarray. Thousands of ordinary protesters and opposition figures were put behind bars and mass Soviet-style trials were aired by the state-funded broadcaster. Individuals, among them senior activists and Reformist figures, were seen walking to the dock in slippers to make confessions and express remorse. In some cases, detainees were seen rehearsing their accounts ahead of the show trials.

In recent years, the practice has reached people with little or no political background such as social media personalities. Last July, a teenage dancer who taught online dance courses for thousands of followers was brought before state TV cameras weeping in regret for disrespecting "social norms." Also in October, another Instagram user nicknamed Sahar Tabar went through a similar ordeal. She is known for a series of cosmetic surgeries she is said to have undergone in her attempt to resemble Hollywood actress Angelina Julie.

However, the key impetus for Sadeghi's bill seems to be Maziar Ebrahimi's controversial August revelations that jolted the Iranian political landscape. Ebrahimi was among 13 individuals Iran's Intelligence Ministry arrested in 2012 over alleged involvement in a chain of assassinations targeting Iranian nuclear scientists. The official narrative had it that Israeli intelligence officers plotted the attacks and hired Ebrahimi and others to finish the job inside Iran.

Recounting horrifying details of torture including fake executions, Ebrahimi spoke of being forced to look straight into the camera and confess to having been trained in Israel before returning home to murder the nuclear scientists. Seven months into the investigation, he said, interrogators told Ebrahimi they knew he is innocent. Yet they kept him and others imprisoned for 26 more months, as their release would be an embarrassing blow to the Intelligence Ministry's competence and undermine its earlier triumphant claims about busting the assassination ring.

The outrageous details quickly trended across Iranian social media networks and prompted reactions from the administration. Government spokesman Ali Rabiei did not deny the comments but shunted the accusation toward the former administration. Intelligence Minister Mahmoud Alavi offered more details, saying his team paid Ebrahimi and others a total of 40 billion Iranian rials ($952,000) in compensation for the unlawful detentions ordered by his predecessor.

Sadeghi has noted that his bill seeks to prevent a repeat of the embarrassment that arose from the investigation surrounding the assassination of the nuclear scientists. It is not immediately clear how much support his proposed legislation enjoys, but pro-Reformist media outlets are already throwing their weight behind him, arguing that state TV confessions no longer attract viewers. There is also backing from some moderate clerics. Ayatollah Nasser Makarem Shirazi has already stated in a religious ruling that it is forbidden to reveal the identity and pictures of a person who has not been convicted. Similarly, Ayatollah Assadollah Bayat Zanjani has dismissed the practice as "religiously forbidden, unethical and lacking any validity in courts of law."

Proponents of the ban have referenced Article 39 of the Iranian Constitution, which holds "the defamation of detained individuals" illegal and orders law enforcement to respect the dignity of interrogated suspects. "If passed, the bill will be seen as a progressive law," declared Reformist lawyer Ali Mojtahedadeh, who believes that the ban will disarm Iran's enemies in their campaigns to discredit the state's judicial proceedings.

Nonetheless, the prospects for Sadeghi's proposed legislation appear shakier when seen from the prism of the deep domestic rivalries that have grown nastier following the extremely sensitive arrest las month of Rouhollah Zam, the director of an opposition news outlet who Iranian authorities accuse of instigating violence for the purpose of regime change. Only hours after the announcement of his arrest, Zam appeared on state TV, repenting his "links" to Western intelligence organizations. Following the confession, a post on from his social media account — made by his captors after the arrest — briefly but explicitly warned those accused of serving as Zam's collaborators at home, "More has yet to come."

Against such a backdrop, some hard-liners have questioned the timing of Sadeghi's bill. In a stinging editorial, Kayhan, the ultraconservative paper known for its close connections to the supreme leader's office, suggested that Zam's upcoming confessions could lead to collaborators from the Reformist camp and thus explains why Sadeghi and others are in a rush to pass legislation to ban them.

In reaction, Sadeghi reminded Kayhan that his original proposal had been drafted and presented to parliament Sept. 29, two weeks before Zam's arrest. Despite admitting to a mistake, Kayhan resumed its attacks against the lawmaker, saying that his bill is an attempt to "withhold the identity of traitors." And diatribes by hard-liners continue to slap Sadeghi, making it harder to gauge the chances of his bill being voted into law.