The Suez Canal has changed the Mediterranean Sea from environmental and economic perspectives since its opening 150 years ago, and these changes are only expected to worsen in light of the expansion of the canal. 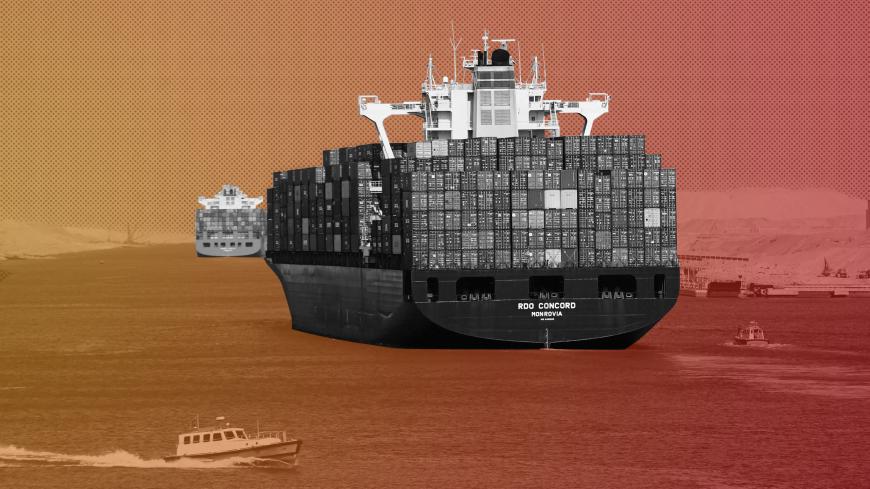 Since the opening of the Suez Canal, the renowned waterway connecting the Red Sea to the Mediterranean Sea, its environmental impact has been a matter of concern, with the arrival of nonindigenous species from other regions.

Since the official inauguration 150 years ago, the number of species that have arrived through the canal — known as Lessepsian or Erythrean species — is estimated to exceed 400, according to different studies. This is a substantial migration that some observers warn is causing the most significant biogeographic change currently underway worldwide.

“Along the Levantine coast, you find in general more Lessepsian species than native,” Stelios Katsanevakis, professor of marine ecology at the University of the Aegean, told Al-Monitor. “This has caused a substantial change in the traffic [food] webs of the Eastern Mediterranean, and such kind of life chain change has not been observed anywhere else in the world.”

The species introduced through the Suez Canal into the Mediterranean are unevenly distributed. Eastern Mediterranean countries such as Egypt, Israel and Turkey have documented the highest number of Lessepsian species, while in the western basin — where the Suez Canal is not the main pathway of introduction — the number is substantially lower.

The scale of this migration, however, has not been constant throughout the years. Even if the introduction of Erythrean species started as soon as the canal opened, only a few established in the Mediterranean back then. It has only been in the last decades that the process has skyrocketed, and the number of alien species in the Mediterranean — not only Lessepsian — more than doubled between 1970 and 2015, bringing a new sense of urgency.

According to professor Bella Galil, member of the Steinhardt Museum of Natural History at Tel Aviv University, this acceleration has been facilitated by a Mediterranean Sea that is now more welcoming for alien species in terms of temperature and salinity. But also because the possibilities to arrive are higher due to the successive enlargements of the Suez Canal since its inauguration and the increase of maritime transport and aquafarming.

“Every [marine] community has a history of millions of years of living together and reaching checks and balances, a dynamic equilibrium,” Galil told Al-Monitor. “What we have done — and are still doing — is shaking this equilibrium, [because] each alien species that arrives displaces and replaces a native one and is shaking this very complex food web and the interrelationship in these assemblages."

Assessing the consequences of the arrival of these alien species in the Mediterranean is now one of the main challenges, given that the scale of their impact is usually poorly known.

“In general it is difficult to tell what the exact ecological effect [of this migration] is, mainly [because you need to] establish a cause-effect on a large scale where you can only see correlations, and because this is a relatively new and ongoing process. … So we don’t yet have a proper sense of the scale of what all this means,” Heinrich Dohna, assistant professor of biology at the American University of Beirut, told Al-Monitor.

Yet some consequences are already clear. Until now, there has not been any basin-wide extinction of indigenous marine species recorded in the Mediterranean, but there are cases of local disappearances and gross reductions in numbers. This has been particularly the case in its eastern basin, where the ratio of alien to native species is the highest.

In terms of consequences for the public health, there are nine species recorded that pose human health hazards, all of which are considered to have arrived through the Suez Canal. Their presence is particularly high in the Levant, but a lethally poisonous pufferfish has been found as far as in Spain. In the summer of 2009, one of these species caused 815 documented hospitalizations along the southeastern coast of Turkey, a report by two professors of the Department of Marine Biology at Istanbul University stated.

The economic impact of Lessepsian species in the Mediterranean is poorly studied. And some, among them the Egyptian authorities, argue that their economic effects might be positive, while others consider that some of these alien species have negative consequences on the provision of food and water, power plants, or tourism and recreation.

“Climate change modifies the environment in the Eastern Mediterranean and makes it unsuitable for many native species,” Katsanevakis said. “If you ask fishermen in Israel, Syria or Lebanon, they will argue that without these alien species fisheries would have serious problems,” he added, before noting that in other areas, such as the Aegean Sea and Turkey, their impact is by contrast seriously negative.

“Estimating the balance between the positive and negative impact is very difficult because the situation is completely different in different areas of the Mediterranean,” he argued.

Galil, however, disputes this position. She said that in other equally warming areas of the Mediterranean located further from the Suez Canal, such as Tunisia, the impact of rising temperatures is minor compared to the Erythrean propagule pressure. “The native biota was displaced and replaced by competitively superior species,” she noted.

Galil added that even if some of these species have economic value, they replace the higher value of the native fish, affecting primarily artisanal fishermen. “The major changes are in the shelf water, where artisanal [fishermen] used to fish. … So you are not only changing the economy in [quantity] but depriving people’s livelihood,” she said.

At a workshop in 2015 organized by the Egyptian National Institute for Oceanography and Fisheries to discuss Lessepsian species, all major concerns surrounding this migration were downplayed, according to a report published by Egypt’s State Information Service. In its conclusions, it was argued that the number of species that caused harm are few compared to those that have a positive economic impact, that the possibility of their basin-wide expansion is weak and that there are no in-depth studies to judge this phenomenon, which is attributed to a great extent on the climate change.

“There is denialism,” Galil said. “It is not enough saying that [all this] is not true. It is like saying that global warming is not happening. You have to bring evidence [because] these are not hypotheses but actual recordings.” She added, without further explanation, that a number of international organizations also fail systematically to mention introductions of species through the Suez Canal due to political reasons.

Galil concluded that Egypt owns a potential solution, saying, “Egypt is now building huge desalinating plants near the canal and their outflow is high salinity affluent, which should be used in the Bitter Lakes [in the center of the Suez Canal] to reintroduce the salinity barrier that used to be present in the early days, and that we know was efficacious in stopping at least some of the invaders."