Egypt takes action against spread of jellyfish on its Mediterranean shores

Nomad jellyfish have been invading Egypt's Mediterranean beaches, affecting tourism; blame is being cast on global warming, pollution and even the new Suez Canal. 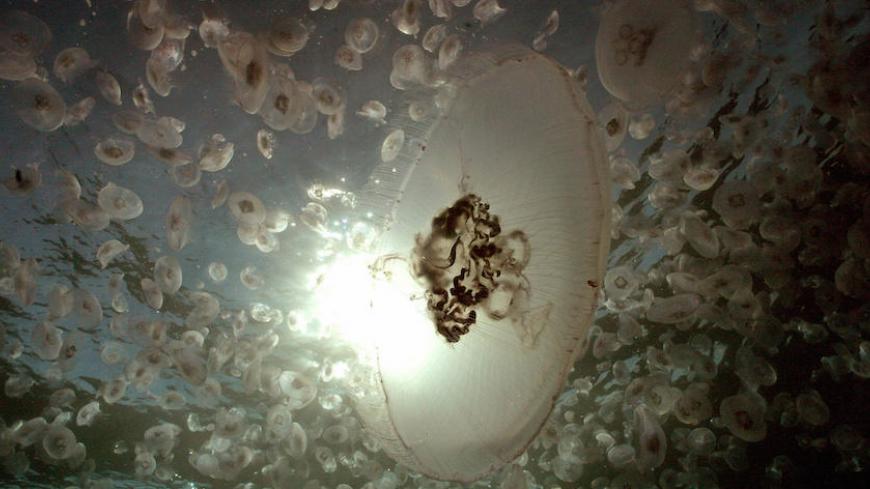 Egypt is taking action against the spread of jellyfish on its Mediterranean shores as vacationers to the country's north coast have complained about the growing phenomenon. The Egyptian Ministry of Environment has formed a marine science working group to study the phenomenon and come up with ways of dealing with it.

In recent weeks, vacationers and social media activists have raised concerns and questions about the increase of jellyfish along the north coast, with photos featuring the jellyfish on shores emerging on social network sites.

The blooms are not only hitting el-Arish, Port Said and Damietta in eastern Egypt but also Egypt's western coast, the ministry added.

The ministry also attributed the spread of jellyfish in seas and oceans of the world to climate change, pollution, illegal fishing and the decrease in numbers of sea turtles.

Some social media activists have cited the digging of the new Suez Canal, which was inaugurated in 2015, as a reason for the greater spread of jellyfish along the Mediterranean Sea. Water and environmental experts have expressed mixed viewpoints on this issue.

In 2014, Egypt began building the new Suez Canal alongside the existing historic 1869 waterway as part of a giant, multibillion dollar project that aims at expanding trade along the fastest shipping route between Europe and Asia.

Environmentalist Sara Refaat said several factors have caused the spread of jellyfish in the Mediterranean. One of the factors is pollution. “People throw plastics in the Mediterranean Sea and sea turtles that feed on jellyfish eat those plastics instead. That has caused a dramatic decrease in their numbers and consequently an increase in the number of jellyfish,” she told Al-Monitor.

The young environmental expert also said the original Suez Canal is among the factors behind the migration of the jellyfish from the Red Sea to the Meditterean Sea. When the Suez Canal was dug in the 1800s, a migration of marine species through the Suez Canal, usually from the Red Sea to the Mediterranean Sea, took place. The migration is called lessepsian migration, being named after Ferdinand de Lesseps, the French diplomat in charge of the canal’s construction. The nomad jellyfish invasion is generally attributed to have taken place in the 1970s.

The Egyptian Ministry of Environment has denied that the digging of the new Suez Canal is a reason for the spread of the phenomenon, citing pollution, high temperature and hunting of sea turtles as being behind the increase.

Refaat said global warming is also a factor behind the spread of jellyfish. “Jellyfish prefer to reproduce amid high temperature conditions. That is why their numbers increase during the summer season,” Refaat said.

With rising rates of global warming, the world has been taking a raft of measures to curb the phenomenon.

The G-20, which met this week in Hamburg, Germany, endorsed new action to fight climate change. As chair of this year’s summit, German Chancellor Angela Merkel had asserted that she seeks to push forward the goals of the Paris climate agreement. “We need the climate-protection agreement, open markets and improved trade agreements in which consumer protection, social and environmental standards are upheld,” Merkel said.

According to the Paris accord, which was adopted Dec. 12, 2015, each country is to determine its plans and regularly report its contributions to limit global warming.

In an interview with the privately owned newspaper Al-Watan, Environment Minister Khaled Fahmy said the government would support and protect species that feed on jellyfish, foremost among them sea turtles. “We have managed to save sea turtles from vanishing in a number of areas in the Red Sea. That has a positive effect on keeping jellyfish from bothering vacationers there,” Fahmy said.

The minister expected that the big blooms of jellyfish along the coast would end for the time being in August, adding that wave movements would help relocate jellyfish toward the north away from Egyptian coasts.

Refaat suggested that the Egyptian government cooperate with fishermen and start hunting jellyfish to reduce their numbers. “That can be an innovative way of dealing with this phenomenon, especially as some countries import jellyfish and their people eat them,” she added.