Before the recent Turkish intervention in northeast Syria, US officials and Syrian Kurdish leaders went back and forth on the role of US troops in the region. 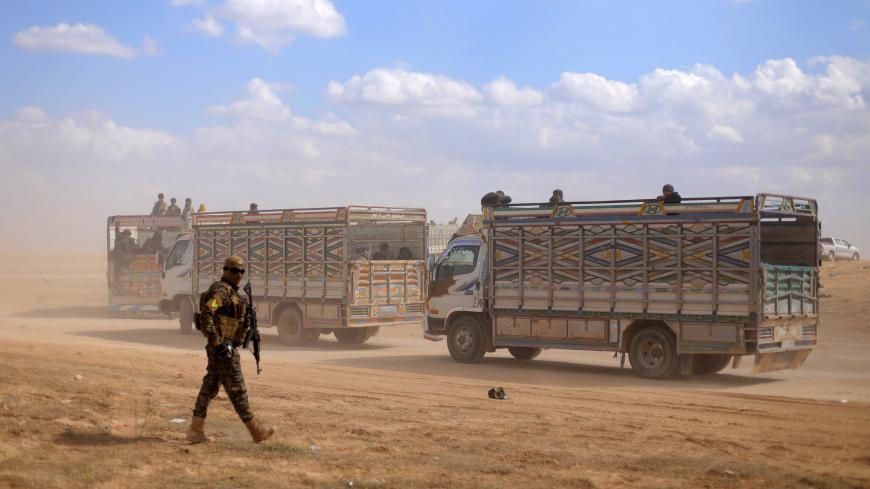 A fighter from the Syrian Democratic Forces (SDF) walks in front of two trucks, near the village of Baghouz, Deir Al Zor province, in Syria March 7, 2019. - REUTERS/Rodi Said

As Syrian Kurds hurled eggs, tomatoes and obscenities at US troops departing from northeastern Syria today, airing fury over their perceived betrayal by Donald Trump, their leaders scrambled to decipher mixed signals from administration officials over whether some US troops would remain in the region.

Mazlum Kobane, the commander in chief of the US-backed and Kurdish-led Syrian Democratic Forces (SDF), is lobbying hard to persuade the White House to deploy a residual force, as first reported by Al-Monitor. This would give the Kurds more leverage over the regime of President Bashar al-Assad, while allowing the US-led coalition to keep up the fight against Islamic State (IS) remnants, or so their reasoning goes. And Trump is reportedly weighing the option, according to The New York Times.

The United States is considering keeping some troops in northeastern Syria to stop oil from falling into the hands of IS, but no decision has been made, Defense Secretary Mark Esper said.

Amid speculation over the United States’ next move, it's clear that it was more than just the Oct. 6 phone call between Trump and Turkish President Recep Tayyip Erdogan that unleashed Turkey’s Oct. 9 military offensive, which is now in its third week.

In a series of interviews, US, coalition and SDF officials, as well as sources with intimate knowledge of the Trump administration’s Syria policy, who all spoke on condition of anonymity, described a pattern of contradictory goals, self-delusion and double speak. “There was a whole period that set that stage [for Turkish intervention and the Oct. 6 phone call]. It is not just the one mistake that was made at the top, it was a lot of other stuff,” said one of the sources. Many blamed Trump’s Syria team, led by Ambassador Jim Jeffrey.

Jeffrey, a veteran diplomat who rejoined the State Department as the new Syria special representative in September 2018, is seen as having pursued irreconcilable goals, such as wooing back Turkey — who is livid over the US alliance with the Syrian Kurds — while seeking to sustain an indefinite US military presence in northeastern Syria in partnership with the SDF. The plan was supposedly to roll back Iranian influence and isolate the Assad regime.

Even today, Jeffrey is reportedly among a majority of administration officials lobbying for a residual force. “Ambassador Jeffrey makes no secret that he thinks our presence there gives the United States a lot of leverage,” a US official confirmed.

Jeffrey was cautioned early on, however, to temper his expectations, according to sources familiar with the internal debates at the State Department. He was told that Trump did not support his ambitions for Syria and that pursuing such goals would “lead to a mess.”

“John Bolton was also a problem,” a source said of the former national security adviser. “Nobody asked Trump.”

The source continued, “A continued US presence does not benefit the SDF — it just draws out the pain. I think the US departure would be very tough at first, but it would expedite some of the decision-making that the SDF is reluctant to do, because who wants to deal with the [Assad] regime and Russia. And if the Americans stay in Syria the Russians have a continued incentive to screw the SDF.”

Jeffrey did not respond to Al-Monitor’s request for comment.

Jeffrey, a former ambassador to Ankara and Baghdad, is expected to testify this week before three congressional panels, including the House Foreign Affairs Committee’s hearing, titled, “The Betrayal of our Syrian Kurdish Partners: How Will American Foreign Policy and Leadership Recover?”

Jeffrey coexisted for a while with Brett McGurk, the former US envoy to the anti-IS coalition who played an instrumental role in crafting the alliance with the SDF in 2014. Unlike Jeffrey, McGurk made it clear to Kobane from the get-go, as Kobane himself acknowledged in an interview with Al-Monitor, that once the war against IS was won, the Syrian Kurds would need to cut a deal with Assad. The US role ought to be to help the Syrian Kurds get the best possible political arrangement with Damascus, though it was never clear how it actually could, given that Washington has no formal relations with the Assad regime.

McGurk resigned following Trump’s first order for all troops to be pulled out of Syria in December 2018. Jeffrey was given McGurk’s title, in addition to his own. SDF officials confirmed that Jeffrey continued to assure them thereafter that US forces would remain indefinitely.

McGurk’s departure and Jeffrey’s arrival, said a US government official, “was seen as an opportunity to recalibrate, to really start pivoting back to Turkey, both because some like Ambassador Jeffrey and others [in the State Department’s Bureau of European and Eurasian Affairs, which handles Turkey] felt like we had been straying from Ankara for a long time, but also because it coincided with major combat operations against IS winding down.”

As a result, engagement with Turkey, a key NATO ally — if an increasingly erratic one — was prioritized. Jeffrey saw it as his mission to fix Washington’s broken relationship with the Turks because he believed this was in the United States’ best interest.

Yet Jeffrey was warned that appeasing Erdogan “makes things worse.” It was not a coincidence that the Turks began a new round of saber-rattling when Jeffrey came onboard.

“All that works with Erdogan is diplomacy backed from the president with steel,” said a source. In a 2017 conversation, when Erdogan raised the possibility of an incursion, Trump told him “Clint Eastwood style” to not even think about it, “and Erdogan stopped.”

As Erdogan kept up his threats to invade Syria, the idea of a security mechanism to address Turkey’s worries about the SDF began to evolve. Such worries stemmed from the SDF's tight links with a Kurdish militia that has fought the Turkish army since 1984.

In Jeffrey’s view, “the Turks were going to invade,” and the only way to stop that was to keep the discussion going through diplomatic channels and to initiate a process like the Manbij road map that would address Turkey’s security concerns and prove that they did not need to launch an invasion. Preventing an invasion would allow the United States to remain in Syria, to stabilize the border and to preserve its partnership with SDF, because because if Turkey invaded it would be difficult for US forces to stay.

Elements of the security mechanism that were made public included pulling heavy weapons back from the Turkish border, withdrawing SDF fighters from specific areas and destroying SDF fortifications.

The Turks were allowed to look around during combined joint patrols and, as in Manbij, to do reconnaissance from helicopters. “What the Americans failed to acknowledge,” said a source, “was that Turkey had a very different interpretation of where this was going to lead.”

“This was helped by the fact that the Manbij road map very foolishly indicated that after Manbij the United States would consider a similar template for other areas liberated from IS, which, of course, is the whole of the northeast and it was totally unprompted,” recalled a source. “You massively concede before you even go to the Turks, where, of course, you are going to concede even more.”

Turkey, therefore, thought it was going to incorporate Manbij into the Euphrates Shield Zone, which is one of the reasons Erdogan continued to say the United States failed to deliver all its promises for the Manbij road map.

Meanwhile, Turkey had presented its invasion plan to the United States sometime in early 2019. It outlined what Turkish forces would do in an initial phase, which is what they have been doing since Oct. 9 — that is, to take over a swath of territory between Tell Abyad and Ras al-Ain and punch through to the M4 highway. The second phase is to take over the rest of the border controlled by the SDF, having put that wedge between the Syrian Kurds’ previously contiguous so-called cantons or administrative zones, Kobani and Jazeera, first.

As the security mechanism talks continued, the State Department’s Syria team intimated to Turkey that once the mechanism was in place, and a modus vivendi struck between Turkey and the SDF, Turkey’s presence could grow more permanent over time and that Turkish forces could set up alongside US ones. But this was never conveyed to Kobane, an SDF official told Al-Monitor.

Then, as recently as September, a bullish Jeffrey told the Defense Post: “When the Assad regime forces, or the forces of their supporting allies, have tried to penetrate into the northeast, we have taken whatever, all necessary means to ensure that penetration ceases and that will continue.”

“Jeffrey is a very talented diplomat,” said a source. “He knows when he can push the envelope and he knows where he can say to Ankara, ‘I can get the SDF to do this,' even if the SDF themselves have not said, ‘Yes, we’ll do that.'"

Some time around July and August, Kobane finally agreed to a limited number of Turkish boots on the ground, provided they were co-located with US troops in a specific area and only temporarily at that.

Emboldened by the steady drip of concessions, Turkey believed the security mechanism “was going to give them what they have just taken,” a source familiar with the substance of the talks said. The source speculated, “It was maybe around the time that Turkey thought the United States was not going to give that to them they decided to invade, even though the United States was implementing the security mechanism and had hinted that they could eventually have bases there with US forces.”  In an Oct. 17 briefing Jeffrey called the Turkish move “a huge mistake.”

All of the officials who spoke to Al-Monitor agreed that at no point had Turkish leaders given the impression that they were no longer considering an incursion. “They were consistently threatening to invade and continued their military buildup, even after the security mechanism was launched [in September]," an administration official said. "So it's not like tensions were going down, and that there was a trigger and that they were ratcheted up again. The tensions were constant.”

Yet Kobane was “spending a lot of time and political capital engaging the military and administrative councils in Tell Abyad and Ras al-Ain, selling them on the idea of the security mechanism," even as hawks within his organization pushed back. “It was being presented to the SDF as if there is a real threat of a Turkish invasion, the United States wants to reduce the drivers for that invasion and the way to reduce that is to work with the Turks in addressing their security needs by removing defensive positions, tunnels, weapons and fighters,” a source said. “Mazlum did all of it. He took Ambassador Jeffrey at his word.”