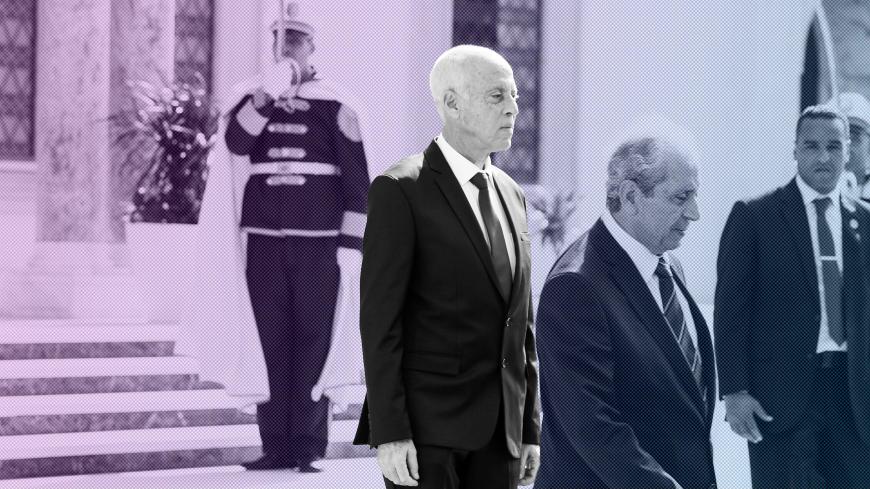 TUNIS, Tunisia — Kais Saied, a low-key candidate with zero political office experience, secured an overwhelming 72.7% of the votes in this month's election to become Tunisia's sixth president. He was sworn in Oct. 23 before parliament, pledging to preserve the foundations of the state, uphold the law, preserve freedoms and promote women's rights in particular.

Since he declared victory in the second round of the presidential election Oct. 13, people have been speculating about what to expect. Saied, 61, is a former law professor who has never held office and is not affiliated with any specific political party; he ran as an independent candidate. The man's expression, when he has one, has been described as stolid, his profile as plain. He's been nicknamed "RoboCop." Yet he won over the country's youth. His supporters come from diverse circles.

Saied has expressed his positions on some controversial issues that divide Tunisian society. He supports the death penalty, criminalization of homosexuality and decentralized government. He has particularly supported women's rights and the need to improve their working conditions, gender equality and economic justice between men and women. However, he rejects a legislative initiative submitted by the late President Beji Caid Essebsi (who died in July still in office) on equality in inheritance, stating that this issue is already addressed by a Quranic text that is not subject to interpretation.

Radia al-Jarbi, head of the National Union of Tunisian Women rights group, told Tunisian newspaper Al-Chourouk that Saied had promised her in a phone call that he will strive to consolidate the gains achieved by women and to enforce all laws guaranteeing their rights.

Al-Monitor talked to feminist activist Bushra Belhaj Hamida, head of the Individual Freedoms and Equality Committee created by Essebsi in 2017 to report on legislative reforms. She admitted the difficulty of discerning Saied’s political identity and intellectual orientation.

But she described him as “socially conservative on specific issues such as inheritance equality, and open-minded and revolutionary on political and cultural issues.” She praised his desire to create a peaceful and youth-led intellectual revolution against “the petrified or obsolete system.”

Noting his strong support for many women's issues, Hamida said Saied may still come around on the inheritance equality draft law, which has yet to be approved by the Tunisian parliament.

Meanwhile, many political activists and analysts agree that Saied, unlike former presidents, has gathered around him parties from the far right to the far left with their various intellectual and ideological orientations. All these parties backed Saied and mobilized their popular bases to vote for him.

The Ennahda party was one of Saied’s first supporters during the second round of the presidential elections. In an Oct. 10 official statement, the party endorsed him over his liberal opponent, businessman Nabil Karoui, who was arrested in late August on charges of money laundering and evading taxes. He was released Oct. 9 but still faces the charges, which he denies. Karoui has never held office.

Also on Oct. 10, the left-wing Democratic Patriots' Unified Party (Watad) called on its supporters to vote for Saied. It noted that Saied "disagrees with [Karoui] on a number of issues and positions." It described Karoui as the candidate "who represents the old system and its corrupt lobbies."

The Tunisian leftist opposition party Popular Front (al-Tayyar a-Chaabi) also called on people to vote for Saied. It said in an Oct. 11 official statement that the “integrity of the candidate [Saied], his social and class affiliation and his declared positions constitute [primary reasons] for voting for him, despite the indistinctness and ambiguity shrouding his platform, not to mention the fact that the right-wing extremist populist forces have infiltrated his quarters.”

Former leftist activist Ridha Chiheb Mekki, who is affiliated with Watad and is a close friend of Saied who helped with the campaign, told Al-Monitor that Saied's vision of government doesn't recognize any specific intellectual affiliation but believes in the principle of law enforcement and the establishment of a state of justice.

Mekki noted that Saied was able to unite Tunisians of different intellectual bents and wants to return power to the people.

In the midst of speculation about the new president's plans, Saied has affirmed in more than one statement to the press that he is a nonpartisan, independent person. Though he is described by some as an Islamist, Saied on Sept. 26 denied any affiliation with that current.