The energy sector is Saudi Arabia's lifeline, but it is more often a honey pot of domestic spending than a resource for future development. 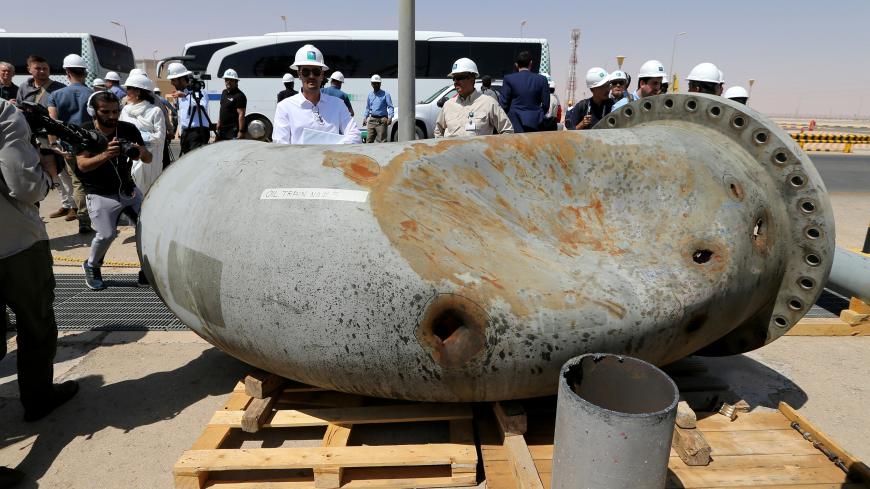 The attacks on Saudi oil facilities at Khurais and Abqaiq last month revealed devastating weaknesses of domestic defense and leadership on the Saudi side, fissures within the Saudi-US relationship and an abdication of the US security umbrella. An act of war and an attack on global energy infrastructure has been met with a muted response from global oil markets. But we should not measure the severity of the attacks in oil prices. That is the wrong metric. Oil prices reflect a short-term view based on weakening demand and oversupply; geopolitical risk seems hardly factored in.

Analysts at Standard Chartered find that September was the third consecutive month of year-on-year oil demand decline, the first time since 2009. Over the past 10 years, oil demand has risen in 113 months and fallen in just seven, but five of those seven declines have been in the last eight months. There is evidence of a growing threat to overall global growth, stymied by the US-China trade war and exacerbated by the systematic undermining of American credibility to defend the Persian Gulf region and act as the steward of an open global economy. The muted reaction to the attacks sets a precedent, increasing the risk environment in the Persian Gulf and the Red Sea corridor among allies and partnerships from NATO to Asia. It is very dangerous, as the CEO of Aramco, Amin Nasser, argued that the risk of another attack is increased by failure to respond.

What the attacks mean for the Saudi economy

While the attacks pierced a veneer of stability in the global economy, they also expose the extreme domestic economic vulnerability of the kingdom. Now, perhaps more than ever, the Saudi economy is dependent on oil revenues to fund public spending, and public expenditure is the lifeblood of the Saudi economy. The rise in oil prices in 2018 gave some hope that the government had more cash to spend. The pipeline of planned and underway projects in the kingdom stands at roughly a trillion dollars in value, but absent foreign direct investment, the plans are largely dependent on government spending for completion.

The largest development projects underway are mostly in the construction sector, rather than major investments in the oil and gas sector, power and water infrastructure or the industrial sector. Investments in the oil and gas and petrochemicals sector have also been relatively sluggish, despite their centrality to economic survival. The oil and gas and petrochemical sectors in Saudi Arabia have not been able to accelerate investment or contract awards for new projects in line with previous periods of growth, as contract awards are down 50% from their peak in 2009-2012, according to MEED.

Where there are new projects that link oil production to petrochemicals, we also see the extension of new political partnerships, as in the expansion of Chinese investment at Yanbu. There are new, closer links to Russia, including the Russian Direct Investment Fund's announcement to open an office for the sovereign wealth fund in Riyadh along with the "consideration" of a joint venture with Aramco in domestic oil services projects. The new partnerships are a natural reaction to a perception of vulnerability and a logical extension of shared economic interests, but they are an insufficient defense of regional stability.

Projects in newer, more experimental areas like tourism and entertainment have priority, while industrialization and growth in the diversified petrochemicals sector ranks second. The megaprojects (and most of these are not off the ground) are dependent on a favorable investment and political risk climate. They will require new international visitors as tourists, those who may think twice about visiting a resort in the sightlines of Iranian drones and missiles. Moreover, the Red Sea resort of Amala and futuristic Neom are vulnerable to climate change in the medium and longer term.

Diversification by hollowing out Aramco

Moreover, we are seeing the transformation of Aramco (and subsequent hollowing out of Aramco) as it is no longer a preferred developer in the kingdom. For example, the Public Investment Fund has taken a 40% stake in the Jasara Program Management Company, a shared venture with an international project consultancy and Aramco, to develop new megaprojects and become a recipient of contract awards and state spending. Aramco’s role is now more a source of investment and revenue to fund these domestic projects.

The plan to list 1% of Aramco on the local Tadawul stock market will likely raise about $15 billion for the government (or $20 billion, with a more optimistic $2 trillion valuation of Aramco), hardly a sum that will make a dent in the trillion dollar project pipeline, or even foot the bill for the $80 billion planned investment in nuclear power production. Higher government spending is creating some growth in non-oil GDP (up nearly 3% year on year), but this is driven by the state, not FDI or private sector growth. FDI has been in a decadelong declining curve, from a high in 2008 of nearly $40 billion to a low in 2017 of just over $1 billion, recovering slightly in 2018 to $3 billion of inflows.

As a growth area of non-oil GDP, there is some positive movement in the financial sector. Banks are some of the largest firms on the Tadawul, but they also find it hard to grow and be profitable, as interest rates are low and most banks' income is derived from interest rate margins. But there is room to grow in the offering of financial products. Some expectation of growth is in an expanding domestic debt market for mortgages, but also the domestic debt market will be a source of finance for the government as it continues to use debt financing for its fiscal outlays, perhaps relying more on domestic sukuk issuance than international capital markets.

There is a noted increase in portfolio inflows, thanks to a new classification under emerging market index inclusion. Saudi Arabia now has 31 Tadawul-listed companies (many of them partially state-owned) included in the MSCI index, with a weight of 2.8% of the index. The shift in the regulatory framework is more important, as foreigners (and institutional investors) have traded more than $65 billion in Saudi stocks and been net buyers of more than $20 billion in Tadawul listed shares in 2019. But, moving more privatizations onto the Tadawul has been slow to progress, with the key focus on the listing of Aramco shares next year. In October, the government announced foreign firms have the option to list on the Tadawul.

All of these initiatives are linked to the vulnerability of the country’s political risk profile, and the long-term challenge of demographics and intergenerational equity. And the latter is the key to sustainable growth. There is a generational equity gap in Saudi Arabia that will be nearly impossible to close without a serious shift in fiscal policy. There is a cliff edge as far as oil revenues are concerned, either because of declining oil demand or eventual depletion of reserves. And the current preference for domestic spending as a drawdown on foreign reserves, borrowing to fund domestic development, and a lack of coordination or attraction of FDI to fund major national development projects, along with the continued difficulty of the labor market, all point to a burden on the state.

Saudi Arabia needs to reduce public spending to preserve and invest that wealth to provide for future generations — this is their generational equity gap. Unlike in Norway or Kuwait, where a portion of oil revenues are mandated by law to be saved or invested, Saudi Arabia’s national wealth is more and more fungible and at the disposal of the leadership. Interestingly, between 2014-2017 spending was curbed sharply, by 10% of GDP in that period, but has since increased as fiscal stimulus, absent major foreign (or private and local) investment. Current oil production can continue for 60 years, but oil price stability (especially at an over $70 break-even price) and demands of demographics challenge how far those revenues can stretch.

The current youth bulge will age, and it will not be replaced with a younger working population to support it as the birthrate declines. This generation is also likely to be a burden on public health expenses given the trajectory of increases in diseases like diabetes, as well as rising costs of social welfare provisions, especially given the current track record of a skills-mismatch for private sector job growth. The labor market challenges are documented clearly in a report by the Kennedy School for the Saudi Ministry of Labor. According to World Bank data, over 25% of young people (age 15-24) are unemployed, yet more than 40% of those seeking work have a college degree.

The key conclusion is that Saudi Arabia's vulnerability and lifeline remains its energy sector, which is less protected by the United States, and more frequently used as honey pot of current domestic spending needs, rather than a resource for future development and future generations. And even if it can be leveraged to invest in longer-term investment needs, it is not clear that the priority spending in domestic construction projects and “megaprojects” is the right choice to resolve the intergenerational equity gap.