Palestinians recently inaugurated a new park at the site from which they had launched the Great Return March, establishing a human presence in a buffer zone that Israel has insisted remain clear. 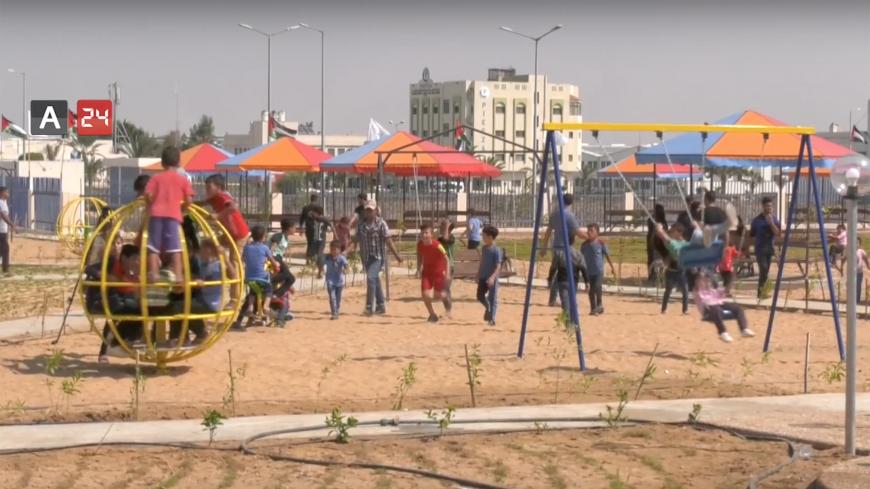 Children play at the opening of the Return Park in the Malika camp, on the eastern border of Gaza City, Gaza. Posted Oct. 14, 2019. - YouTube/A24 News Agency

GAZA CITY, Gaza Strip — On Oct. 13 representatives from various Palestinian factions inaugurated Return Park in the Malika camp meters from the Gaza-Israel border fence and including part of the buffer zone that Israel forbids Palestinians from entering. The park marks the starting point of the Great Return March, the series of demonstrations held every Friday in Malika and four other camps going back to March 30, 2018, to draw attention to the situation in Gaza and the Palestinians' dispossession.

The park contains green spaces for walking and places to sit. There is also a spot reserved for meetings of the Higher National Commission for the Great Return March and Breaking the Siege, the group in charge of organizing the protests composed mainly of representatives from Hamas, Islamic Jihad, the Popular Front for the Liberation of Palestine and the Democratic Front for the Liberation of Palestine.

At the inaugural event, Khaled al-Batsh, head of the national commission, said in a speech, “The aim behind opening the park is pumping life into the buffer areas where Israel [shoots] and kills Palestinian people.” He asserted that the marches had become a “life project” for Palestinians, claiming that they will continue until their goals are met, in particular breaking the Israeli siege imposed on Gaza since 2007.

The park sits on 10 dunams of land that had once been used as a site for dumping the rubble of houses and other structures destroyed by Israel in its 2014 war on Gaza. According to Talal Abu Zarifeh, another national commission member, “Establishing this park is a message to the world: Palestinian people want a new life, far from suffering and killing.” He added, “The marches of return are trying to fulfill these goals.”

Ghazal al-Wadiye, who was walking in the park with her three kids, said, “This park has made me happy. We have the right to walk around on our land, and we should not accept the Israeli siege imposed on Palestinians, which prevents us from reaching border areas.”

Wadiye, who lives in eastern Gaza City near the border, said the park is also important as a source of leisure for those living in the remote border area, where there are not many opportunities for relaxation or entertainment.

Noting additional functions of the park, Abu Zarifeh told Al-Monitor, “The aim behind establishing the park is encouraging a human presence in border areas and helping citizens to build, reclaim and plant them.”

As noted, the park sits incorporates part of a buffer zone that Israel has insisted remain clear. On this Abu Zarifeh said, “[It is unlikely that Israel is] bold enough to shoot at people in the park to force them to leave and never return. Israel would have to answer to Palestinian factions if it does that.”

Iyad al-Qarra, a political analyst and writer for the Hamas-affiliated newspaper Felesteen, told Al-Monitor, “Establishing the Return Park is based on bolstering Palestinians’ right to the border areas and aims at cementing a Palestinian presence there.” He added, “Israel had applied pressure on Hamas to prevent the establishment of the park through Egypt, which has been brokering a truce agreement since November 2018.” Qarra also remarked that the constant motion of people visiting the park would “exhaust” Israeli personnel deployed along the border to track people's movement.

Talal Okal, a political analyst for the newspaper Al-Ayyam, told Al-Monitor, “Establishing the park points to the seriousness of the factions in Gaza to continue organizing the marches of return indefinitely.” He further explained, “[The park is] an open invitation from Palestinian factions, especially Hamas, to all citizens to be present on the border with Israel to regain their freedom to access these areas, in spite of Israel.”

Okal also ruled out the Israelis shooting into the park despite it being in a buffer zone. “Doing that would embarrass it before the whole world.” he said. “How would Israel look if it killed a family walking in the park? Such a step would harm it diplomatically.”

Ashraf al-Qudra, a spokesperson for the Gaza Ministry of Health, told Al-Monitor that as of Oct. 11, the Israeli army had shot and killed 314 Palestinians, including 61 children, taking part in the Great Return March. More than 33,000 Palestinians have suffered multiple injuries.

The Malika park is the first of several that the national commission hopes to establish along Gaza's eastern border with Israel. The commission is currently working on assessing the budgetary and other capacities needed to realize them.