"Sisters in Arms" casts an artful eye on the plight of Iraq's Yazidi women and the Kurdish women who fought the Islamic State, but critics say its narrative is misleading. 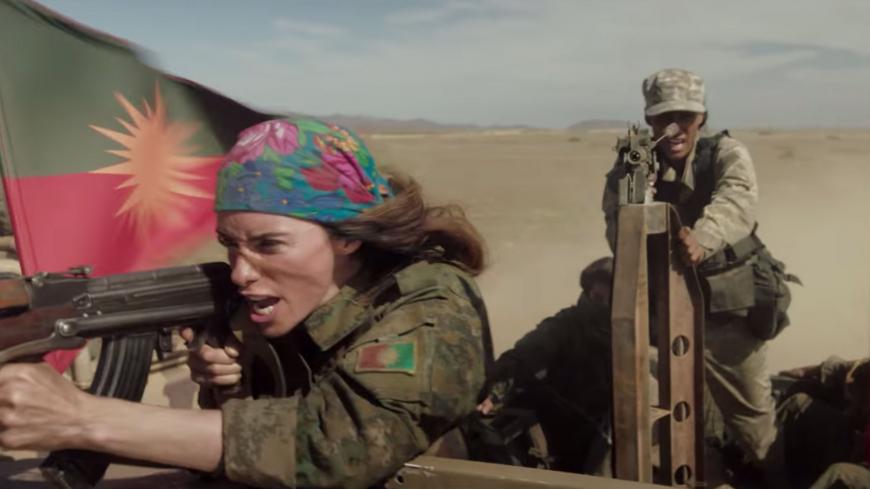 A still from the film "Sisters In Arms." - Caroline Fourest

SULAIMANIYAH, Iraq — "Sisters In Arms” from French director Caroline Fourest is a bitter reminder of the massacre of the Yazidi minority group by Islamic State militants after they took control of the town of Sinjar in 2014. Unlike other movies on the subject, it focuses on how Kurdish and foreign women of different backgrounds and beliefs fought back against the jihadists.

"Sisters In Arms" was shown for the first time in the Middle East at the opening ceremony of the 4th Sulaimaniyah International Film Festival on Oct. 1. Many of its scenes — particularly those of female fighters fighting the extremists — brought cheers, whistles and applause from the audience.

The film starts with an idyllic spring scene in the Kurdish countryside between a Yazidi girl named Zara and her two brothers. It's not long before heavily armed IS militants raid the village of the Yazidis, whom IS describes as “devil worshippers” and demand convert to Islam or face death. Zara’s father, who refuses to convert, is killed. Zara is raped and sold as a sex slave to a British IS fighter. She manages to escape to a liberated area, where she joins the foreign female fighters who eventually rescue Zara’s little brother and help defeat IS in a town that resembles Sinjar. In the final scene, Zara and "Mother Sun" — an older and more seasoned fighter — stand together victoriously, both aware of the hardships the Kurds still have to endure for self-determination.

Maya Sansa, an Italian actress of Iranian descent who played the role of one of the female fighters, told Al-Monitor, “I played ‘Mother Sun’ — a female fighter fighting alongside the Kurds against Daesh [the Arabic term for IS]. I think it is a very important role, and I am much honored that Caroline offered that role to me. We bring the message that Kurds are brave and your fight is so important to us, even foreigners want to join you.”

Despite a very committed production team, the shooting was not easy, said Sansa, who had to learn how to handle a Kalashnikov for her role. “The conditions were tough but we were committed and ready to overcome any challenge," she said.

Some Iraqi and foreign critics, however, are less enthusiastic, saying that the film distorts history. Iraqi actor and director Jalal Kamil, who attended the festival, told Al-Monitor that the film, though good on the whole, had its shortcomings, mainly with the narrative. “The film should have raised great sympathy in me, but unfortunately some [weak moments in the narrative and irrelevant scenes] made it difficult,” he said.

Following the screening in Sulaimaniyah, many Kurds criticized it as detached from reality and misleading about what actually happened in the war against IS in northern Iraq. Many critics said that the film minimized the way the Kurdish peshmerga forces — mainly forces loyal to the Kurdistan Democratic Party — left the Yazidis defenseless against IS.

She said she realized that the film is not a documentary, however. “The film reflects the director’s viewpoint,” she told Al-Monitor.

Fourest told Al-Monitor that the Yazidi women went through hell but she wants to show them as more than victims.

“The women fighters terrified the jihadists — men of IS were scared of being killed by women," as they believed that they would not be considered martyrs and go to heaven if they were killed by women. "In a way, IS fighters have been punished by their misogyny; their misogyny became their curse," she said.

“This is so powerful that only cinema can give us a picture of what was going on. Because part of this war is finished, the world wants to forget it. My film aims to make sure that the world will not forget about what happened here, about what the Yazidi women have suffered and about the Kurdish resistance,” she told Al-Monitor.

Asked about the criticism, Fourest said that the film is “praise for the Kurdish people and especially women who won the war against IS.”

It is not a documentary, she said, adding that the movie begins with the Yazidis being abandoned by the peshmerga, but she did not want to deepen the internal Kurdish disputes.

“I wanted, as a filmmaker, to build a utopia where all Kurds are under a same flag, though this does not exist in reality. No [faction] names are given, because I wanted that the world know that Kurds as a whole won this war. The IS flag also is different. [Some observers] will notice that some uniforms and characters are similar to the YPJ, others to the peshmerga. The woman chief — the character known as the Lion of Kobani — is YPJ. The colonel is a peshmerga.”

She said that in general, the film followed reality very closely, with “the humanitarian corridor, when refugees were taken by the YPJ and helped," and another scene "that is a metaphor for Sinjar, where you see the brigade — with YPJ uniforms — struggling and winning against IS,” she said.