Why Iraq's Yazidis are upset over new film depicting IS massacres

Women who suffered at the hand of the Islamic State are now being subjected to further humiliation, in the opinion of the Yazidi community, which is protesting a film on the topic that they say is inaccurate and misleading. 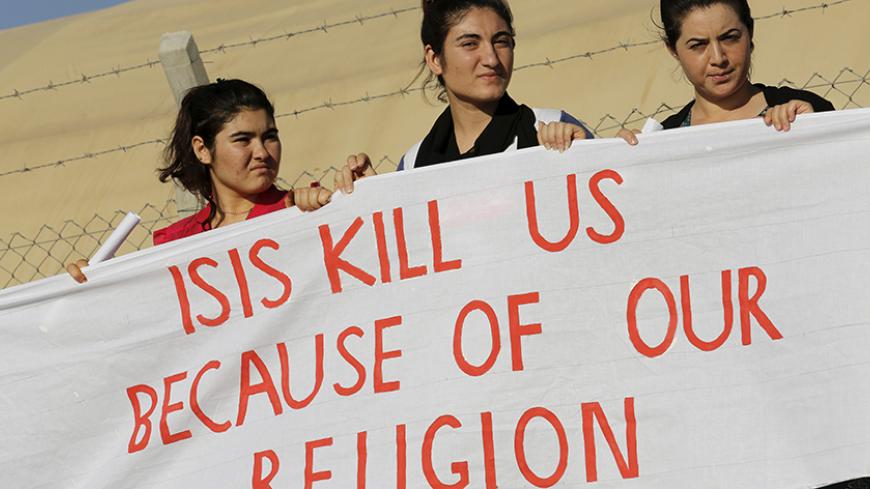 Yazidi refugee women stand behind a banner as they wait for the arrival of United Nations High Commissioner for Refugees Special Envoy Angelina Jolie at a Syrian and Iraqi refugee camp in the southern Turkish town of Midyat in Mardin province, Turkey, June 20, 2015. - REUTERS/Umit Bektas

"The Dark Wind," a film directed by Hussein Hassan, sparked a large-scale objection among Yazidis at this year's Duhok International Film Festival.

The film was screened the first day of the festival, held Sept. 9-16 in Dahuk, Iraqi Kurdistan, despite protesters' claims that the film presents a bad image and twists facts about Yazidi women who were captured by the Islamic State (IS) and escaped its grip.

Murad Ismael, the executive director for the Houston-based nonprofit Yazda, told Al-Monitor, “The [one] scene alone — where a Yazidi father tells his survivor daughter that she does not befit them, and puts her at gunpoint — is enough [for us] to perceive [the film] as offending to Yazidis.”

The Yazidi community had previously objected to the film and demanded that changes be made. Yet, the director did not respond to their call, Qader Hassan, a Yazidi activist, told Al-Monitor. He said the Yazidi Lalish Dahuk cultural center asked permission to watch the entire film before the festival, following which "we expressed reservations to the director [who attended the cultural center showing] and asked him to delete offensive scenes. He did not delete them, although he promised to do so.”

In an interview with al-Hurra channel Sept. 10, Hassan responded to the Yazidis' reservations: "I have no comment on the objections, because they did not come to watch it, but they came to say no to the film." He also used harsh expressions against them, saying, "With this behavior, they did not respect what has happened to them [IS massacres]."

Yazda issued a statement Sept. 11 demanding that the judiciary intercede to stop the film from being shown in the future. The statement said, “The film shows that the Yazidi community rejects its daughters, which is inconsistent with the reality. … A few days following the genocide, the spiritual council issued a decision on how to deal with the victims and urged the Yazidis and the world to take care of the survivors and provide them with full support.”

The statement pointed out that Yazda collected more than 1,060 testimonies from female survivors as part of a documentation and assistance program. Not one of their stories aligns with the scenario in the film, the statement said.

Khodr Domli, a Yazidi researcher and media figure, also expressed his objection to Al-Monitor, saying, “The Yazidi survivors are an excellent example to be followed, not only in Kurdistan or Iraq, but also in all of the Middle East countries. They faced with courage captivity, rape and sexual slavery. They have overcome the ordeal and have become a symbol of bravery.”

In the same context, Vian Dakhil, a Yazidi member of the federal parliament, said in a statement, “None of the survivors were abused [in their own community], although nearly 2,500 girls and women were rescued in the past two years. This is because we are a civilized community and we realize that what happened to our daughters was against their will.”

Dakhil also demanded that future showings of the film be halted, and said, “We call on the competent authorities in the Kurdistan Region to stop the screening of the ominous film, and prevent it from being shown in any local or international festivals — because thousands of youths and male relatives of the survivors view that they and their daughters are being offended in the film. [The film] is a seed of sedition that should not be allowed to grow."

Speaking to Al-Monitor, former Yazidi parliament member Ameena Saeed warned, “The screening of the film is very dangerous for the victims who are still in IS' grip. If they get to watch the film, they will believe that the Yazidi community will not welcome them if they ever escape and may make dangerous choices.”

Saeb Khodr, a Yazidi activist and the head of the Adyan Foundation, which advocates peaceful coexistence, believes the relevant parties — including the director, the festival administrators and Dahuk provincial leaders — deliberately provoked the Yazidis with the way the issue was handled.

Khodr told Al-Monitor, "This is part of a series [of steps] designed to distract Yazidi youths from crucial issues concerning the future management of their own areas in the post-IS era in Iraq.”

Princess Oroub Bayazid Ismail, a member of the Yazidi royal family, wrote on her Facebook page that Kurdish media is deliberately distorting reality regarding the way the Yazidi community is dealing with the survivors and is providing misleading facts. “This is a historical threat to us, the Yazidi community, which is a peaceful community that looks for peace away from hatred and malice," she wrote.

Some aspects of the film also offend other Iraqis, said Zaid Bahr al-Ulum of the Najaf seminaries. One scene shows a man in the slave market displaying a Yazidi captive for sale. The man is wearing traditional Shiite clothing usually worn by descendants of the Prophet Muhammad.

"This is a clear falsification of history," Ulum said. "The truth is that there are no Shiites within IS' ranks. The Shiites have even volunteered to free the Yazidi female captives. The Shiite religious institution has stood by the side of the Yazidis in their plight.”

The subject is especially sensitive as Iraqi forces are preparing to liberate Mosul from IS. Tensions are high because Mosul's predominately Sunni citizens fear reprisals if Shiite forces participate in the operation. Another sore spot is that the film was funded in part by Qatar through a Doha Film Institute grant. Qatar is suspected of supporting extremist groups in Iraq and Syria.

Hissou Hormi, the head of Yazidis Foundation in the Netherlands, told Al-Monitor, “Involving the Shiites in a scene where the Yazidis were being sold, the funding from a Qatari institution and the distortion of the reality regarding how the survivors are welcomed [back] turn the film into a new bomb that could ignite a conflict that goes beyond offending the Yazidis.”

The hype caused by the film and the messages received by the Yazidi community in particular, and the Iraqi community in general, show how difficult it is for Iraqis, regardless of their sects, to deal with the tragedy of IS occupation and subsequent massacres. This tragedy will always haunt any process to restore trust among the different Iraqi communities on the one hand, and between citizens and the political system on the other, in the post-IS area.