If passed, a draft bill in the Iraqi parliament would guarantee financial compensation for Yazidi women kidnapped by the Islamic State, but a clause on the religion of children born from rape has provoked controversy. 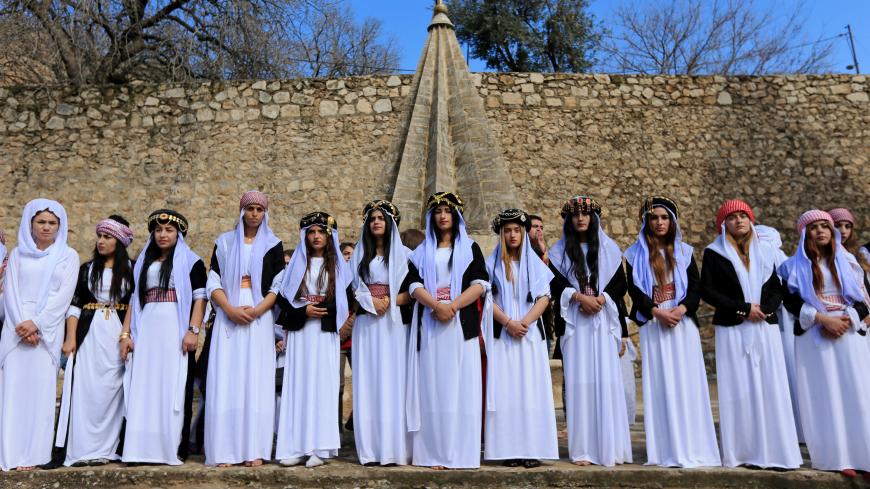 The Iraqi president's office announced April 7 that it has sent a draft law on compensating Yazidi women to the Iraqi parliament. The presidential press office said the bill aims to financially compensate the female survivors of kidnappings by the Islamic State (IS), offer them rehabilitation and care, and provide other means of subsistence.

Sagvan Murad Jindy, the Yazidi community's representative at the president's office, said, “It was clear that a draft law was needed to address the psychological and physical suffering of Yazidi women at the hands of IS gangs. Most Yazidis are displaced in the camps in Kurdistan and live under extremely difficult conditions. When these female survivors return, they will probably find that the rest of their family are missing or have left the country to reach safe havens."

Parliament and the president's office are coordinating to turn the bill into law as soon as possible. Parliamentary speaker Mohammed al-Halbusi said he hopes to pass the law to combat the adverse effects of kidnapping operations.

Saeb Khodr, a Yazidi representative in parliament and head of the Parliament Legal Committee, expressed his full support for the draft law. He said the draft has been received by the committee for review. “I am optimistic about the approval of the law as soon as possible," he said. "Guaranteeing the rights of survivors and victims of IS, whether Yazidis or from among the other Iraqi components, is something that cannot be taken lightly.”

The draft law stipulates the rights of Yazidi female survivors, including the establishment of a General Directorate for Survivors' Affairs based in Ninevah governorate. A Yazidi civil servant will be appointed by the Council of Ministers to head the survivors' directorate. The law also grants female survivors a monthly stipend; residential land or a housing unit, free of charge; and the right to an education, subject to age-related conditions. Female survivors will also be prioritized when it comes to appointments to public posts.

Notably, the draft law deems the crimes against the Yazidis as genocide, and recommends that the cases be brought to the attention of international bodies to initiate criminal proceedings against the perpetrators of the crimes. The draft marks June 3 as a national day to commemorate the crimes against the Yazidis, with the Ministry of Culture and the Municipality of Baghdad in charge of taking the necessary measures to honor the memory of Yazidi victims, whether through the construction of a monument or the organization of an exhibition.

Despite the draft's positive aspects, some Yazidi activists have criticized the draft. Saman Daoud, editor of Ezidi 24 website, said, “The draft provides rights to female survivors only. It ought to include the rest of the victims, as there are male and children survivors who are living under very precarious conditions. Especially in the case of the children, who lost all family members and became orphans with no breadwinner.”

He added, “Some women died in captivity or after being freed from IS because of complications ensuing from the atrocities and horrors they faced.” Daoud believes the draft law needs to compensate all victims, not to mention the men who were killed and buried in mass graves, and the children who were forced to become fighters.

Mirza Dinnayi, a Yazidi activist, described the draft law in its current version as excellent, even if it does not attend to other aspects of the Yazidi tragedy. “This is only the first legal step — it should not be the last one,” he told Al-Monitor. “Transitional justice, accountability of criminals, compensation of Yazidis and the achievement of genuine reconciliation in the framework of granting Yazidis their full rights constitute only a part of a long-term project that the Iraqi authorities should execute.”

The most controversial aspect of the draft law regards the fate of the children who were born from the rape of Yazidi women by IS fighters. The draft notes that those children's status should be regulated in accordance with the law. “Children of a female Yazidi survivor shall be subject to applicable laws,” the draft law states.

The Yazidi community will face a slew of complicated issues over the issue of children fathered by IS fathers. As it is, the community finds it difficult to accept these children. The draft law has only made the children's acceptance more difficult, as the Yazidi community embraces a religion that emphasizes religious and ethnic purity.

Nevertheless, the draft law is likely to pass parliament with ease. Putting into place some exceptions to the law that would allow the children's religious conversion could appease fears and ensure justice for the victims.