Prime Minister Benjamin Netanyahu had gambled on US President Donald Trump to spearhead the struggle against the "Iranian threat," in what now emerges to be a colossal strategic failure. 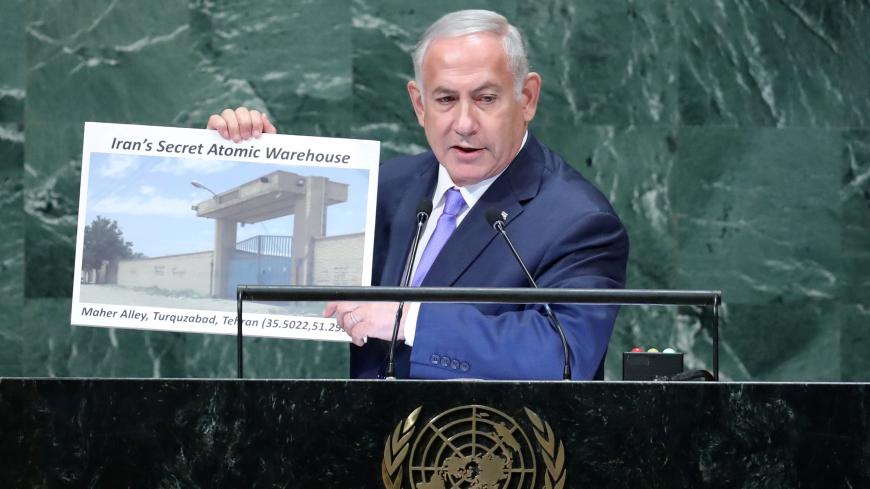 The giant Likud party billboards featuring Prime Minister Benjamin Netanyahu smiling at US President Donald Trump under the caption, “Netanyahu, a Different League,” still tower over major Israeli intersections. Who knows, the Likud may need them again soon, judging by the state of the negotiations on forming a new coalition government. Another election round may soon be on the agenda. However, with every passing day, Netanyahu’s investment in the US president is going sour. The question marks surrounding Trump’s foreign policy, and mostly (the absence of) his Middle East policy, are morphing into warning signs. His abandonment of the Kurds in northern Syria is the latest in a series of US measures indicating that Netanyahu’s stalwart US pillar increasingly resembles a weather vane buffeted by a hurricane.

“This isn’t spin, it’s not a whim,” Netanyahu promised in his Oct. 3 speech at the swearing-in ceremony of the 22nd Knesset, embarking on a terrifying description of the “Iranian threat." Iran, he warned, was attacking international shipping lanes and the Arabian Peninsula. “It is also directly attacking US aircraft and now the Saudi oil fields, and in the clearest words possible, this is what their generals said, as recently as two days ago: 'Israel will disappear.'”

Still, the spin lies, intentionally, in what Netanyahu did not say. He did not refer to his colossal failure in handling the crisis vis-a-vis Iran.

Netanyahu dislikes admitting failure, especially an egregious strategic one. Far easier to talk about Iran’s “gall” and to frighten of “a second Holocaust.” Netanyahu’s flagship — the struggle against Iran — is slowly sinking. Trump, the captain whom the prime minister placed at the helm, no longer heeds orders from Jerusalem. Republican lawmakers considered “friends of the Likud” are not keen on yet another US entanglement in the Middle East. The Democrats, for their part, are up until their heads in electing a presidential candidate. At an Oct. 3 meeting in his office with a bipartisan congressional delegation, Netanyahu talked about the great importance of bipartisan support. “The bipartisan support for Israel is a mainstay of our national security,” he said, stressing, “It is not something that we just say pro forma. It is deep and abiding.”

However, Israel has never had a prime minister whose relationship with the United States has been so blatantly tainted by partisanship, turning Israel into a tool in the service of one party. Safe to assume that his Democratic guests have not forgotten his speech lashing out at President Barack Obama’s nuclear policy. Obviously, they, too, noticed that when “the greatest friend Israel has ever had at the White House” courts the Iranians, Netanyahu is silent. Not only that, when Trump accused American Jewry of dual loyalty, Netanyahu did not stand by them. US Democrats may decide not to rush to the prime minister’s side now that Trump is turning his back on him, while “a different league” Netanyahu is out for the political count at home.

With the weakening of the trilateral platform of support on which Netanyahu based his strategy vis-a-vis Iran (and his Likud’s election propaganda), cracks are emerging in the third side of the triangle. Last month’s missile attack on Saudi oil installations, for which the United States has not retaliated, confronted the Saudis with the limits of their military power and the instability of the US president. US Secretary of State Mike Pompeo made it clear to Saudi Crown Prince Mohammed bin Salman that any decision on retaliation against Iran would be the Saudis’ to make, and that Washington would be happy to help, but would not fight instead of Riyadh. Trump himself added, “Saudi Arabia should fight their own wars, which they won't, or pay us an absolute fortune to protect them and their great wealth-$ trillion!”

In a Sept. 29 CBS interview, Prince Mohammed said the problems with Iran and the question of safe shipping in the Persian Gulf cannot be resolved by military means, and expressed support for a diplomatic solution. On Sept. 24, Pakistani Prime Minister Imran Khan revealed that Mohammed and Trump had asked him to try his hand at mediating between the Saudis and Iranians. At the same time, a senior official in the office of Iraq’s prime minister told the online news outlet Middle East Eye that Mohammed had given a green light to Iraqi mediation with Iran, adding that Iraq’s national security adviser Falih al-Fayyadh had recently visited Washington to coordinate a timeline for negotiations.

Netanyahu has claimed repeatedly that common anti-Iranian interests were paving the way to peace between Israel and the Sunni Arab states, bypassing the Palestinian problem and burying it under the West Bank settlements. There you have it — a premier league premier marched on a red carpet in Oman a year ago without saying a word about the 2002 Arab Peace Initiative, or uttering the words “Palestinian state.” For now, this twisted bypass road has been blocked.

The reliance on Trump and his Eastern European allies in order to bypass the European Union and Western Europe has also turned out to be flawed. Brussels has not forgotten Netanyahu’s contribution to Trump’s decision to pull the United States out of the nuclear deal with Iran. Spanish politician Josep Borrell Fontelles, tapped to head the European Union’s defense and foreign policy, attacked Trump over the withdrawal in an interview this past May, saying, “He’s the first American president to voice hostility towards the European project, to describe us as foes.” The same can be said of Netanyahu. He does not hide his opinion of the EU leaders’ refusal to ignore Israel’s occupation policy and their attempts to revive the two-state solution.

EU members’ embassies in Israel, unlike the US Embassy in Jerusalem, are interested in the situation in the occupied territories. At the EU’s Brussels offices, unlike the White House, officials assiduously study their representatives’ reports about Netanyahu’s efforts to bury the two-state solution. Borrell, the new foreign policy chief, is likely to be one of those readers, as indicated by the article he penned after the May 2018 Nakba Day events on Israel’s Gaza Strip border in which dozens of Palestinians were killed, blaming the event on “the dehumanization of the Palestinians by a large part of the Israeli political class and society.” Borrell’s views have sent Israel’s Foreign Ministry and the political right into a tizzy even before he entered his new office.

Such a series of colossal strategic failures justify the demotion of “different league” Netanyahu to a lower league, more so than do any of the corruption indictments hanging over his head. They merit an official commission of inquiry, not a pre-indictment hearing by the attorney general.