Netanyahu’s opposition within the Likud

While Likud leaders don’t dispute Prime Minister Benjamin Netanyahu’s bloc policy, a rebellious group within the party has launched a broad campaign against the alliance with the right-ultra-Orthodox parties. 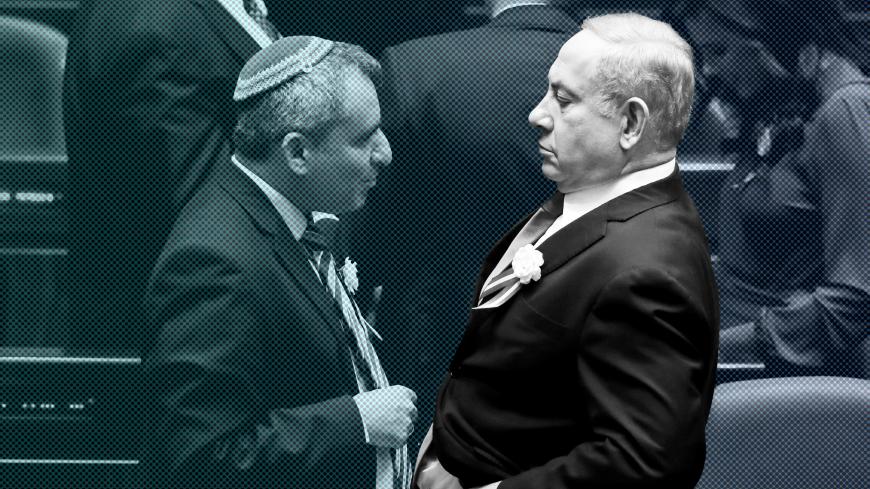 Prime Minister Benjamin Netanyahu has thus far succeeded in overcoming any sign of subversion of his leadership of the Likud, and even maintains exclusive control over policymaking and management of the coalition negotiations. Even the man considered his prominent rival within the Likud, Knesset member Gideon Saar — the only one to announce that he would run against Netanyahu in the next internal election — declared Oct. 6 that until this election takes place Netanyahu is the leader of the Likud. And in his words, “No one is denying the prime minister’s role as chairman of the Likud. When there is a race for leadership of the party — as the prime minister himself initiated a few days ago — I will run.”

Netanyahu’s policy in coalition negotiations, according to which the Likud will stick with the right-ultra-Orthodox bloc for the coalition (a bloc of 55 mandates), is at this stage one of the biggest obstacles preventing the formation of a unity government with the Blue and White party. The two parties, Likud and Blue and White, share a similar world view on many issues. The common assumption is that without the Likud’s link with the ultra-Orthodox and the extreme right, the road to unity would be easy. On the other hand, Blue and White understands that if a coalition is established with the entire bloc it would be a minority within it.

The second obstacle preventing a national unity government is Netanyahu’s demand to serve first in a rotation. A senior source in Blue and White told Al-Monitor on condition of anonymity this week that it will not be possible to advance in negotiations if Netanyahu continues to hold on to two conditions that are “unacceptable” in his words. “We promised in the election campaign that we will not sit with Netanyahu when he is facing an indictment and not to serve in a government with the extremists. It is clear to us that we can’t compromise on both of these things,” said the source. In the meantime, Netanyahu is also not willing to compromise on either of these conditions, and the dead end remains with no path forward.

While senior Likud leaders do not dispute Netanyahu’s position, a rebellious group within the party — calling itself “the New Likudnicks” — has protested the alliance with the right-ultra-Orthodox parties. In recent weeks, they posted various statements on Facebook against the bloc, such as on Oct. 20, “We are Likud members. Not anti-Zionist Lithuanians [an ultra-Orthodox sect]. No to the bloc!” On Oct. 28, they launched a campaign on the streets and on social media, with the slogan, “We voted for the Likud, not for the bloc. National unity now.”

Nir Hirshman, one of the leaders of the New Likudnicks, told Al-Monitor that the liberal Likud constitution is quite far from the platforms of the other parties in the bloc, and that the only thing connecting some of these parties is an alliance of interests of criminal suspects. “If only [ultra-Orthodox Knesset member] Yaakov Litzman would sign an agreement to prohibit discrimination on the basis of sex, and [right-wing Knesset member] Bezalel Smotrich would agree to prohibit racial discrimination, we could add them to our camp,” Hirshman said. “These clauses are set in the Likud constitution and they are the foundation for the party’s values. The heads of the other parties in the bloc ideologically oppose them on principle and thus there is no place for this alliance with them.” According to him, the formation of a unity government is the greatest goal for the State of Israel, “which is now in economic, security and civic paralysis. We are exhausted and the politicians are playing with blocs.”

It is no surprise that the New Likudnicks chose to attack the ultra-Orthodox. This group in the Likud represents the liberal democratic branch of the movement. Thus, for instance, they demand imposing a core curriculum — essentially math and English — on ultra-Orthodox schools and yeshivas that receive government funding. They further demand arriving at as fair an arrangement as possible on the question of the ultra-Orthodox draft and even supported Avigdor Liberman’s Enlistment Law. Their power among Likud members is relatively significant. In the primaries before April’s election they supported candidates who advance their agenda, such as Tzachi Hanegbi, Yuli Edelstein, Yisrael Katz, Sharon Haskel and others. Hirshman himself, who also ran, did not manage to be elected to a realistic spot, although he received more than 9,000 votes.

The Likud leadership has not liked their activities, especially their sharp critique of Netanyahu’s conduct toward the judicial system. In January, Lior Meiri, one of the leaders of the New Likudnicks, attacked Netanyahu after the prime minister harshly criticized the attorney general. Meir then addressed Netanyahu, saying, “You’re not the Likud, and the Likud is not you. And you’re surely not the state, although you encourage such statements on your Facebook page. The Likud will win the election (and with a bigger margin) even without you. You should be ashamed of your conduct.”

About a week after the last election, on Sept. 23, they even demanded that Netanyahu resign. “This is a time to rehabilitate and return democracy to movement institutions and end the attacks on judicial and enforcement authorities. … Netanyahu has finished his historic role,” they wrote in their call to hold primaries for Likud leadership.

According to Hirshman, in a survey they conducted they discovered that about 57% of Likud voters agree with their position regarding the formation of a unity government with the Blue and White party.

Even if this support is real, its impact on Netanyahu is nil. If he decides to give up the bloc, he would do so only because he had no other choice and this would be the least bad option from his respect. However, the position expressed by the New Likudnicks is important in highlighting opposition to Netanyahu within the Likud, although it is not yet clear what the impact would be of the group’s split Oct. 28 into two factions.