Iran urges Turkey to pull forces out of Syria 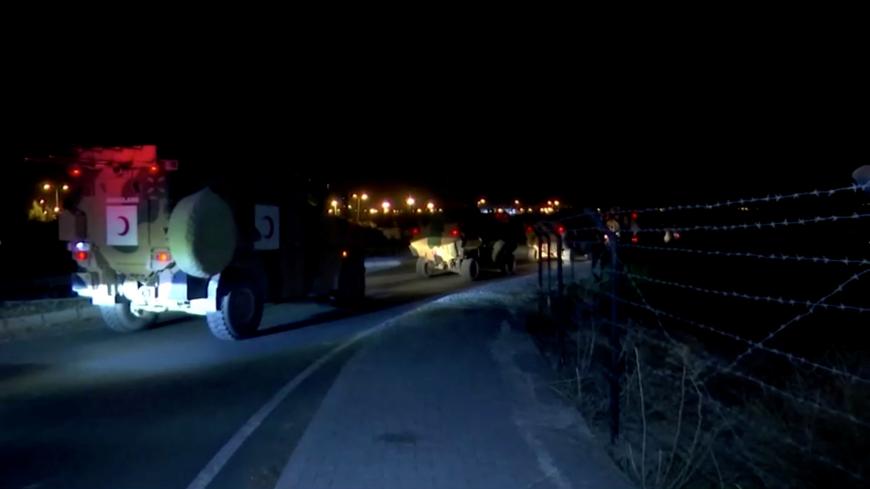 A Turkish armored military convoy is seen driving along the border with Syria, in Akcakale, Turkey, Oct. 9, 2019, in this still image obtained from video. - REUTERS TV via REUTERS

The Iranian Foreign Ministry has issued a statement opposing Turkey’s incursion into northeastern Syria: “Iran’s Foreign Ministry expresses concern over Turkey’s military action inside Syria’s territory, and with serious consideration for the humanitarian situation and respective dangers for civilians in the region under conflict, it calls for an immediate suspension of attacks and withdrawal of Turkish forces from Syria.”

The statement continued, "Just as Iran understands the security concerns of Turkey, it not only believes that military action will not solve security concerns, but that it will bring widespread humanitarian and material damages. Iran opposes these actions.” The statement said Iran is in contact with both Syria and Turkey and stressed a “peaceful resolution that respects Syria’s territorial integrity.”

Iran’s criticism of Turkey’s decision to send forces into Syria has been relatively mild in comparison to their reaction to US and Western military actions inside Syria. Iranian military officials have not addressed the incursion, though they typically would if Iran was aggressively opposed. For instance, Islamic Revolutionary Guard Corps Cmdr. Hossein Salami spoke Oct. 10 during a visit to the northwestern regional city of Ardabil, Iran, but he only discussed the “weakening choices of US options” with respect to Iran and did not mention Turkey.

For Iran, the presence of US forces in northeast Syria is the real concern. US special operations forces have been working alongside the Kurdish People’s Protection Units, known as the YPG, to fight the Islamic State. However, the promotion and arming of Kurdish forces on its borders always posed a problem for Turkey. Iran called the presence of US forces in Syria “illegitimate” and said their evacuation from Syria “should have taken place much sooner.”

Fars News Agency gloated about how Arab countries in the Persian Gulf have condemned Turkey’s incursion despite having been previous allies, particularly with respect to Syria, where they worked together to arm the Syrian opposition and topple the Syrian government. The article stated that while the Turkish incursion began with an agreement between Turkish President Recep Tayyip Erdogan and US President Donald Trump, it has “encountered serious regional and international protests.” With the exception of Qatar, which relies on Turkey after being blockaded by other Gulf Cooperation Council countries, other major powers in the Persian Gulf such as Saudi Arabia and the United Arab Emirates not only condemned Turkey’s actions but referred to it as an “invasion.”