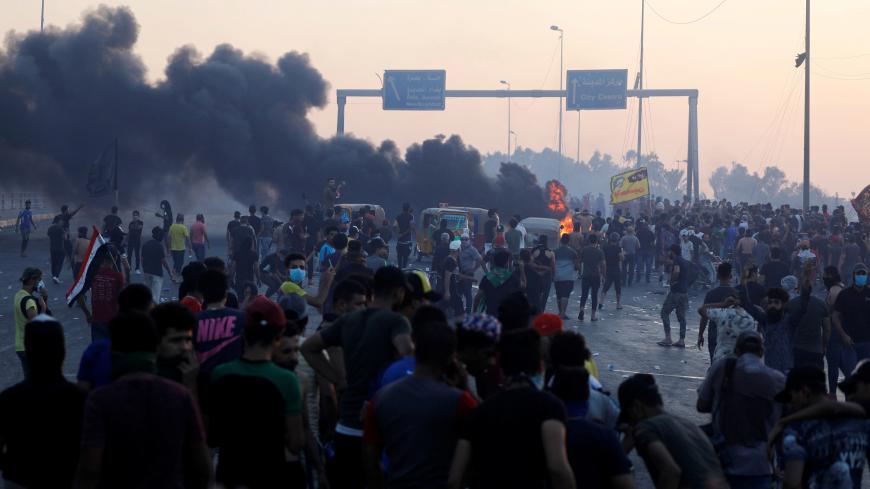 Demonstrators gather at a protest after the lifting of the curfew following four days of nationwide anti-government protests that turned violent, in Baghdad, Iraq, Oct. 5, 2019. - REUTERS/Thaier Al-Sudani

As the mostly peaceful protests over corruption and unemployment continue into their second week across Iraqi cities, Iranian officials are now reacting, indicating that authorities are becoming more concerned about unrest in the neighboring country.

Iran’s Supreme Leader Ayatollah Ali Khamenei tweeted Oct. 6 in Persian, English and Arabic, saying, “Iran and Iraq are two nations whose hearts and souls are tied together through faith in God and love for Imam Hussain. … This bond will grow stronger day by day. Enemies seek to sow discord, but they’ve failed and their conspiracy won’t be effective.”

Not only is Iraq a strategic political ally for Iran, but there are also deep cultural and religious ties between the two countries. Making matters more urgent for Iran is that authorities must prepare for the Oct. 19 Arbaeen religious ceremony in which millions of pilgrims will travel to Karbala, Iraq. Continued unrest in the country, which has already left more than 100 protesters dead and thousands injured, would jeopardize not only the security of Arbaeen pilgrims but deal a heavy political blow to Iranian officials who use the religious ceremony to display their political clout.

The latest Iranian official to speak about the protests in Iraq is judiciary head Ebrahim Raisi. At a meeting of judiciary officials Oct. 7, Raisi said, “Seditions have taken shape in Iraq in order to diminish the great event of Arbaeen. Last year they tried to start a sedition in [the Iranian city of] Mashad …but their goal never materialized. This year in Iraq, an American-Saudi sedition has taken place to overtake Arbaeen.”

Hossein Ashtari, head of Iran’s police force, also spoke about the unrest in Iraq ahead of Arbaeen and the police force’s role in facilitating the ceremony. “The police are part of a group that has given the most to serve pilgrims, and there have been efforts so that pilgrims do not experience any problems,” Ashtari said Oct. 7, while meeting with Ayatollah Mohammad Alavi Gorgani. He continued, “Enemies have created conspiracies in Iraq, with which the help of the people have been quelled.”

It is not clear what Ashtari meant about the protests being quelled or regarding the police force’s efforts in bringing about security. However, before the protests broke out on Sept. 21, chief of staff of Iran’s armed forces Mohammad Bagheri said the Islamic Revolutionary Guard Corps would work alongside Iraq's Popular Mobilization Units (PMU) to “ensure security” for Arbaeen pilgrims.

While the protests are mostly comprised of young people, hard-line Iranian columnists have focused on the “foreign enemy” line regarding the protests. Sa’adollah Zaeri wrote for Tasnim News Agency that “a few thousand protesters in a country the size of Iraq is natural.” He wrote that despite millions of Iraqis from different political sides voting in the election that brought Adel Abdul Mahdi to power as prime minister, the United States and its allies seek to “collapse the Iraqi political system.”

Hossein Shariatmadari, editor of Kayan, wrote that while the economic concerns of Iraqi protesters are legitimate and authorities have vowed to address them, some protesters have “deviated with their slogans.” According to Shariatmadari, slogans chanted against the friendship between Iran and Iraq, and against the PMU and Arbaeen are the same slogans that “enemies of Iraq” use.