Iran claims to have foiled terror plot against Qasem Soleimani

The head of the IRGC’s intelligence organization claims it foiled an assassination plot on Qasem Soleimani, the IRGC’s Quds Force commander. 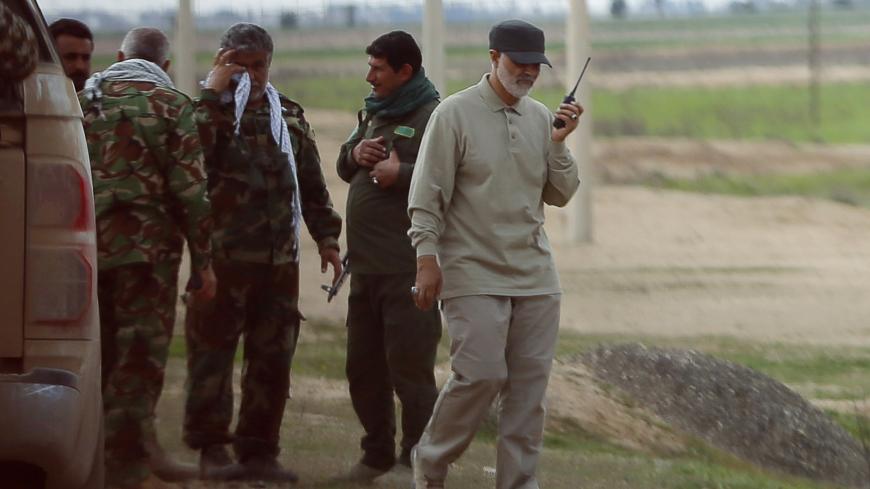 According to Hossein Taeb, head of the Islamic Revolutionary Guard Corps (IRGC) Intelligence Organization, a plot to assassinate the head of Iran’s Quds Force commander Qasem Soleimani has been foiled.

Taeb, who as head of the IRGC’s Intelligence Organization personally oversees the suppression of protests and arrests of journalists and activists, said that after failing in “seditions and conspiracies and polarizing the country,” the enemies of the Islamic Republic hatched a plot to assassinate Soleimani in the southeastern province of Kerman. Taeb said the plot was years in the making and originated as a “Hebrew-Arab” plot, meaning Israel and Arab countries aligned with Israel — likely in the Persian Gulf.

According to Taeb, the team of three hired to carry out the assassination was tasked with placing 350-500 kilos (771-1,102 pounds) of explosives in a religious center that Soleimani often frequented during religious holidays in his hometown of Kerman. The objective of the attack, according to Taeb, was to make it appear as if it was a domestic operation and ignite a sectarian backlash within the country.

As head of the Quds Force, Soleimani is tasked with IRGC operations outside of Iran’s borders. Iraq, one country in which Soleimani has spent years cultivating influence, has experienced anti-corruption protests in recent days. In response, Iran’s Foreign Ministry issued a travel warning, asking Iranian pilgrims to Iraq to delay their trips until calm is restored in the country. Millions of Iranians travel to Iraq for the religious holiday of Arbaeen during this time.

According to Ahmad Mohammadi-Far, spokesman for the office of Arbaeen, Iraqi officials have asked to delay the entry of Iranian pilgrims from the Khosravi border crossing due to unrest in the country. Certain media outlets have reported that borders between Iran and Iraq had been closed, but Mohammadi-Far said these reports were inaccurate. He said the Chazabe border remains open both ways, and the Khosravi border crossing is open for those traveling to Iran from Iraq; it is only closed for those entering Iraq.

Since the fall of Saddam Hussein after the 2003 US invasion, Iraq has become a strategic ally for Iran. In addition to historical cultural and religious ties between the two countries, Iranian officials have increased their political influence on both state and non-state actors in the country in the last two decades. The protests and dissatisfaction with the governing system is certainly unwelcome news for those in Tehran.

In response to the travel warnings and border closure for Iranian pilgrims, conservative analyst Mahdi Mohammadi tweeted, “It’s become clear that Arbaeen has become a very terrifying phenomenon for America, Israel and Saudi Arabia, that in order to diminish it rioters were hired.”

Millions of Arbaeen pilgrims, often traveling on foot, have become a frequent sight since the fall of Hussein and the coming to power of Shiite political parties in Iraq. Mohammadi, suggesting that foreign powers are behind the protests, continued, “They will see that a Shiite even walking on foot is still stronger than any army or intelligence agency that thinks they can become entangled with followers of Hussein.” Arbaeen marks the end of the 40-day mourning period for Hussein ibn Ali, grandson of the Prophet Muhammad and the third Shiite Imam.