Intel: How Trump is trying to get ahead of Congress on Turkey sanctions 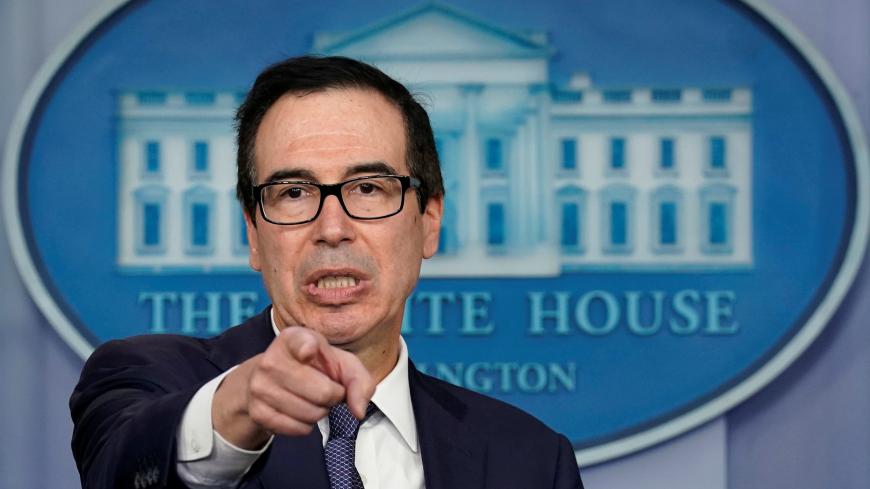 US Treasury Secretary Steven Mnuchin speaks about sanctions against Turkey at a news briefing at the White House in Washington, Oct. 11, 2019. - Reuters/Yuri Gripas

President Donald Trump is trying to get ahead of a bipartisan effort in Congress to sanction Turkey after his order to withdraw US troops from the northeast Syrian border paved the way for Ankara’s offensive against the Syrian Kurdish People’s Protection Units.

Treasury Secretary Steve Mnuchin announced today that Trump plans to sign an executive order that could lead to sanctions on Turkish “individuals and entities” before Congress moves on the sweeping sanctions proposed by Sens. Lindsey Graham, R-S.C., and Chris Van Hollen, D-Md.

“I think the message to Congress is I know that people were contemplating sanctions,” said Mnuchin. “We’re on top of sanctions. The president will use them when necessary.” However, Mnuchin also said the Trump administration hopes to avoid using the sanctions even as he vowed that the United States “can shut down the Turkish economy if we need to.”

Mnuchin made the announcement after speaking with Turkish Finance Minister Berat Albayrak and promised to outline the potential sanctions to the Turks in private.

Why it matters: It remains unclear how the White House’s proposed sanctions stack up with the broad sanctions in the Graham-Van Hollen bill, which targets Turkey’s defense and energy industries as well as top Turkish officials, including President Recep Tayyip Erdogan and Mnuchin’s counterpart Albayrak.

A Treasury Department press release said the sanctions threat is intended to “dissuade Turkey from any further offensive military action in northeast Syria, including but not limited to indiscriminate targeting of civilians, targeting of civilian infrastructure, targeting of ethnic or religious minorities, or targeting or other actions that undermine the continued counterterrorism activities” of the US-backed Syrian Kurds. It also emphasized that Turkey must not “allow even a single [Islamic State] fighter to escape” in the offensive.

Mixed messages: Notably, the Trump administration still has not implemented sanctions on Turkey for purchasing the Russian S-400 missile defense system despite a legal requirement to do so under a 2017 Countering America’s Adversaries Through Sanctions Act (CAATSA).

Neither the White House nor the Treasury Department responded to Al-Monitor’s inquiry as to whether it intends to implement the CAATSA sanctions on Turkey. Graham and Van Hollen also did not respond to Al-Monitor’s inquiry as to whether they still plan to move ahead with their sanctions package in light of the White House announcement.

What’s next: While Trump has threatened to “obliterate the economy of Turkey” if Ankara does anything he deems off-limits in the Syria offensive, he has also invited Erdogan to the White House for a November meeting.