There have been no exchange of fire between Hamas and Israel in weeks, which could mean both parties are preoccupied with their internal crises and waiting for regional developments to unfold. 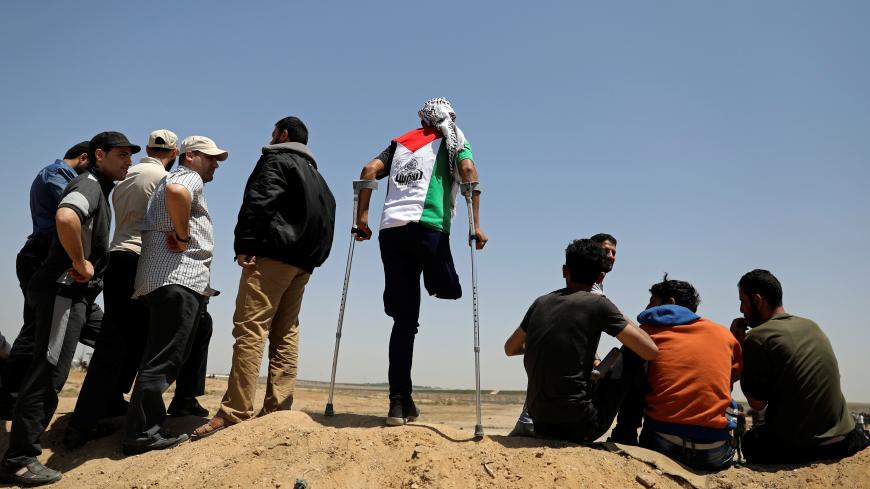 Palestinian demonstrators take part in a protest marking the 71st anniversary of the Nakba, when hundreds of thousands fled or were forced from their homes in the war surrounding Israel's independence in 1948, near the Israel-Gaza border fence, east of Gaza City, Gaza Strip, May 15, 2019. - REUTERS/Mohammed Salem

Since the weekly marches of return on the Gaza Strip's eastern border with Israel first began in March 2018, 10 military escalation rounds have occurred between Gaza and Israel. The latter has fired rockets toward Hamas military targets, while the movement, along with other factions, has responded by firing rockets toward southern Israeli settlements.

The most recent military escalation in Gaza was on Sept. 11, when the Israeli army bombed Hamas positions, including an arms factory, a tunnel and naval targets, in response to rocket fire from Gaza into Israel. The cross-border shelling caused no casualties on either side.

Since then, over six weeks have passed with no tension whatsoever. On the contrary, the Gazan-Israeli border has been almost completely calm, prompting both Palestinians and Israelis to wonder what is behind this calm in the Gaza Strip.

Mahmoud Mardawi, Hamas leader and former official in its military wing Izz ad-Din al-Qassam Brigades, told Al-Monitor, “Israel has always initiated attacks on the Palestinian people and the resistance responded, but since Israel is in a political vacuum after two rounds of elections in April and September, it is avoiding aggression against Gaza and provoking the resistance less and less. All parties in the region are in disarray and the resistance is waiting to see how the situation plays out.”

Palestinians and Israelis wonder whether this calm is due to Hamas fearing a great Israeli reaction that could lead to a full-scale, costly war, or if there is a Palestinian-Israeli desire to wait for the Iranian-Saudi tensions, the Turkish military operation against the Kurds and the popular protests in Lebanon and Iraq, and take it from there. Meanwhile, Hamas is looking forward to knowing the new political action in Israel due to the post-election crisis. In addition, Israel made promises to Hamas through Egypt to accelerate the implementation of humanitarian understandings between the two sides in October 2018.

Khalil Shaheen, director of research at the Palestinian Center for Policy Research and Strategic Studies - Masarat, told Al-Monitor, “The calm in Gaza is deceiving. There are more reasons for the situation to implode than there are calm factors, which mainly revolve around Hamas' desire to implement understandings with Israel by distributing Qatari funds to the poor, establishing a field hospital in the northern Gaza Strip, introducing Egyptian goods into Gaza and reducing participation in the marches of return, despite attempts by small armed groups in Gaza to break the calm by firing rockets into Israel.”

Perhaps the ongoing calm in Gaza shows Israel, regional states and the international community that Hamas is the main actor in the Gaza Strip, controlling the key to escalation or stability. In addition, the Hamas leadership has been preoccupied with internal Palestinian national issues, and believes maintaining calm in Gaza is an urgent priority, in preparation for a solution to the economic crisis that will not be resolved if a military escalation with Israel breaks out.

Hamas has been facing a growing economic crisis in the Gaza Strip in the absence of a radical solution to end the suffering of Palestinians. Around 70% of Gazans are suffering from food insecurity, while 33% of the population lives below the poverty line, the Ministry of Social Development in Gaza said on Oct. 20. The ministry stated that both the poverty and unemployment rates in Gaza have reached 75% in 2019.

Spokesman for the Popular Resistance Committees Abu Mujahid told Al-Monitor, “The resistance is not looking for an escalation with Israel, but we are prepared for the worst. We have already told the occupation, through mediators, not to inflict Palestinian casualties in the marches of return. We are following up on the Israeli differences and we want to make sure [Israeli Prime Minister] Benjamin Netanyahu does not export his internal problems to the Gaza front.”

In an Oct. 18 Maariv article, Israeli military expert Alon Ben-David questioned why the escalation in Gaza has not been heading Israeli news bulletins as usual in recent months, citing Israeli security and military circles as unable to explain the complete silence in the Gaza Strip. However, he did mention that there is an implicit unwritten consensus between Hamas and Israel to pass this critical stage.

The Palestinians realize that engaging a military escalation with Israel may not be the right thing to do in light of the Israeli political situation, while they want the flow of Qatari funds and economic projects to continue, which is why they would want the calm to persist and any tension that arises in Gaza to be contained.

Hussam al-Dujni, political science professor at Umma University in Gaza, told Al-Monitor, “Hamas’ allies in the region are preoccupied with regional polarizations — Iran with Saudi Arabia, Turkey with the Kurds and Qatar with the Gulf. I do not think these countries are dedicated to pursuing the Israeli aggression on Gaza, which makes Hamas focus on calming its front, waiting for the regional situation to stabilize.”

Hamas may be arming itself with the support of the Palestinian public opinion in the Gaza Strip to achieve calm and is stressing its unwillingness to go into escalation and pressuring armed groups to refrain from any tension with Israel. In August, Hamas asked regional and international mediators to continue their efforts with Israel to maintain calm in the Gaza Strip.

Palestinian military expert and former PLO artillery commander Wassef Erekat told Al-Monitor, “It could all be the calm before the storm. Our history with the Israeli wars is full of deceit and surprises, but the volatile situation in the region may not allow for a large-scale military escalation in Gaza, especially with the growing strength of the anti-Israel parties — Iran, Hezbollah and Hamas — which makes Israel incapable of actually taking a serious military risk against Gaza.”

The cautious calm in Gaza serves both Palestinians and Israelis. Hamas wants to catch its breath, take a warrior’s break, restore its military capabilities and coordinate with its allies in the region on the nature and timing of any armed confrontation.

Meanwhile, Israel is preoccupied internally with an intractable political and constitutional crisis on the one hand, and is keeping a watchful eye on the imploding regional situation on the other, which could mean the Gaza issue can wait until further notice.