Congress calls on US to scout nuclear alternatives to Turkey base

Congress has tucked a provision into a bill to sanction Turkey for its two-week incursion into northern Syria that would study the possibility of removing US nuclear weapons and troops from Incirlik Air Base. 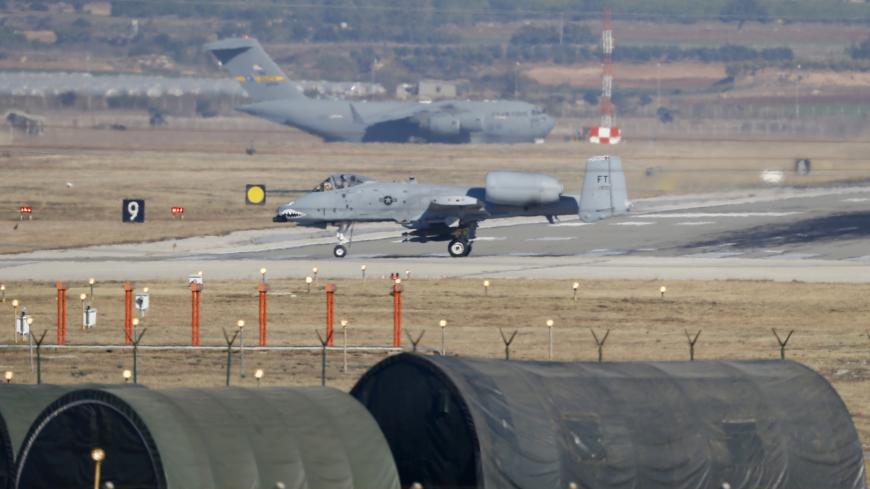 A US Air Force A-10 Thunderbolt II fighter jet (foreground) lands at Incirlik Air Base in the southern city of Adana, Turkey, Dec. 11, 2015. - REUTERS/Umit Bektas

Congress has tucked a provision into a bill to sanction Turkey for its two-week incursion into northern Syria that would study the possibility of removing US nuclear weapons and troops from Incirlik Air Base.

Sen. Lindsey Graham, R-S.C., and Democratic Sen. Chris Van Hollen of Maryland’s bill to put forward stringent sanctions on Turkey calls on the Donald Trump administration to deliver an interagency report to Congress “assessing viable alternative military installations or other locations to host personnel and assets of the United States Armed Forces currently stationed at Incirlik Air Base in Turkey” within 30 days of enacting sanctions.

Introduced last week, the bill goes beyond Treasury Department sanctions on assets and travel against top Turkish officials suspended during a US-negotiated five-day cease-fire that expires Tuesday, slashing all American military sales and aid to Ankara.

The US government does not publicly acknowledge the presence of nuclear weapons staged overseas, including some 50 B-61 gravity bombs stored at the base in southern Turkey. Last week, The New York Times reported that the State and Energy departments were reviewing plans for the tactical nuclear weapons based at Incirlik after cross-border Turkish artillery fire put US troops in harms’ way in Syria.

But while Trump appeared to concede that the United States was “confident” about the security of the weapons at a press conference with the president of Italy earlier this week, experts say the security of the weapons has become an increasing challenge — even before a 2016 coup attempt against Turkish President Recep Tayyip Erdogan shook the country.

"It has been an issue for many years, even before the failed coup that seized the base where the nukes are stored,” said Stephen Young, a senior analyst at the Union of Concerned Scientists in Washington. Young added, “Given Trump's threats against Turkey, it makes a great deal of sense to withdraw them soon."

Erdogan initially held out on US requests to use Incirlik to strike at the Islamic State (IS) in Iraq and Syria, but Turkey eventually OK’d Air Force fighter jet flights in 2015 after an IS suicide bomber from the militant group killed 32 people in the town of Suruc.

While Van Hollen said on Friday the bill would move forward as it collects more sponsors despite the administration touting a wavering a US-brokered cease-fire, the plans of Graham — a Trump ally — are less clear.

The South Carolina Republican and one-time ally of the influential former Senate Armed Services Committee Chairman John McCain, R-Ariz. — a champion of the Syrian and Iraqi Kurds — who died in 2018 told Fox News on Sunday he was making progress in convincing Trump to authorize US airpower to back an international military presence to staunch the outbreaks of IS prisoners.

“I am increasingly optimistic that we can have some historic solutions in Syria that have eluded us for years if we play our cards right,” Graham said on the “Sunday Morning Futures” program.

If the bill moves forward, the reevaluation of the Pentagon’s troop and nuclear posture could prove another threat to worsening US ties with Turkey, as Defense Secretary Mark Esper has called on European allies to take “diplomatic and economic measures” to slow down Turkey’s military offensive.

Esper is set to travel to NATO headquarters in Brussels later this week.

The Trump administration already kicked Turkey out of the F-35 program after it purchased a Russian air defense system this summer. But the United States still has not imposed automatic sanctions on Ankara for taking the system, which Senate aides said could put undue pressure on the relationship.

The challenge for the administration in sanctioning Turkey is that "you have to be able to turn [sanctions] up and down," the aides said, adding, "It's foolish to think that they'll go full bore." For instance, heavy Russian sanctions against Turkey after the 2015 shootdown of a Sukhoi-24 bomber jet in Syria caused serious economic pressure on Ankara. The more the United States sanctions countries and denies them weapons sales, the aides said, it could force allies to go elsewhere for their security.

The United States first sent nuclear weapons to Turkey in 1959, affording the Pentagon greater opportunity to respond quickly to a potential Soviet attack during the early stages of the Cold War.

Now, most US nuclear warheads are attached to intercontinental ballistic missiles, giving the United States greater range to respond to a potential strike and leading to accusations from experts that the Incirlik weapons are “relics” of the Cold War in the hands of an increasingly difficult military partner.

“They serve no meaningful deterrence or assurance purpose,” said Kingston Reif, director for Disarmament and Threat Reduction Policy at the Arms Control Association. “Turkey is increasingly an unreliable ally, and the weapons are unnervingly close to a war zone,” Reif added.