Amid the lingering threat of US sanctions on Turkey over its purchase of Russian missiles, US Secretary of Commerce Wilbur Ross paid a long visit to Turkey, leading many to believe bilateral trade will be set apart from the political rows between the two countries. 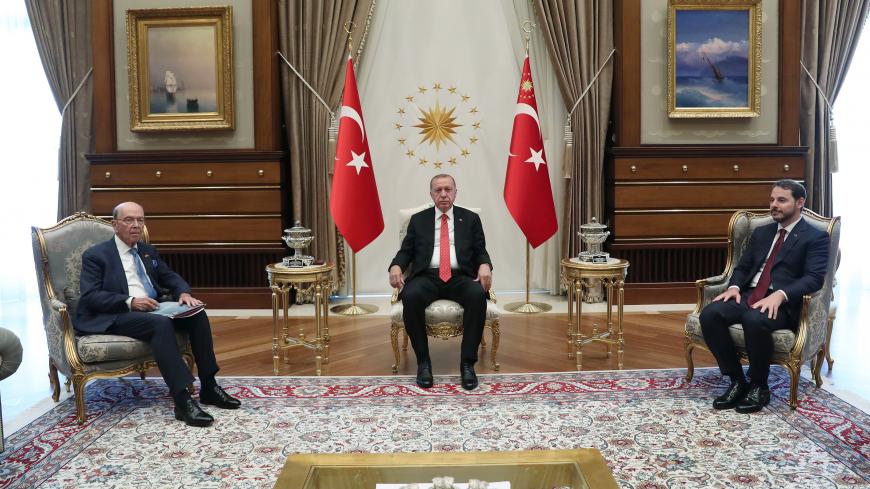 Turkish-American ties never cease to surprise. They remain mired in myriad discords, from the safe zone plan in northern Syria to Ankara’s acquisition of Russian missiles. In an intriguing episode this week, US Treasury Secretary Steven Mnuchin was asserting Washington’s intent to penalize Ankara over the S-400 missiles, as Secretary of Commerce Wilbur Ross was holding talks in Turkey on a quest to boost bilateral trade.

During his five-day visit, which began Sept. 6 and was the longest ever by a US Cabinet member, Ross met with President Recep Tayyip Erdogan, ministers and the business community, including representatives of 43 American and 52 Turkish companies. As Ross confirmed, US President Donald Trump and Erdogan have set a target of $100 billion in annual bilateral trade — a big jump from the some $20 billion accomplished last year.

During Ross’ visit, the two sides agreed to set up sectoral committees to explore trade opportunities, focusing on textile, furniture, marble, cement, chemicals, automotive and related side industries, jewelry, civil aviation, machinery and logistics. Ross encouraged US companies to invest in Turkey instead of China.

The trade target may be a rather modest figure for the American economy, but can this rapprochement help Turkey’s fragile economy, which is currently in the grips of recession? Can economic collaboration put off political tensions?

Turkish companies are hoping to take advantage of the tariff barriers that Washington is erecting for Chinese goods. “It is very possible for the [US] import potential that will emerge from the tariffs on China to be met with exports from Turkey,” said Mehmet Ali Yalcindag, head of the Turkish-US Business Council. According to Ismail Gulle, chair of the Turkish Exporters Assembly, a comprehensive market survey across American states has found market potential for as many as 192 Turkish products.

On the last day of his visit, Ross drew a realistic picture of the trade prospects, highlighting the shortcomings of Turkish companies. He said the $100 billion target should be contributed equally by the two countries, in which case the $50 billion in exports on America’s part would constitute only a tiny fraction of the more than $5 trillion of US imports and exports of goods and services. On the Turkish side, he said, companies are predominantly small, which makes it harder for them to compete internationally. Also, Turkish businesses are not familiar with the American market, he added.

What this means is that the Americans are capable of reaching the target, but Turkish businesses have a long way to go. The Turkish side believes a free trade agreement could remove the snags, yet such a prospect appears unlikely in the short run. Ross was candid on this point too. Stressing that trade deals take years to negotiate, he cautioned against premature expectations, given that Turkey and the United States had not even started talks on such an agreement.

Rifat Hisarciklioglu, head of Turkey’s Union of Chambers and Commodity Exchanges, a major business group that hosted Ross over a working dinner, listed a number of steps expected from Washington to remove hurdles and facilitate business. While reiterating the call for a free trade agreement or a preferential trade arrangement, he urged Washington to reinstate Turkey in the Generalized System of Preferences (GSP), a program designed to promote economic growth in developing countries by providing duty-free entry for a wide range of products. He also called for Turkey’s removal from the scope of Section 232, the legislation that allows US presidents to impose tariffs on national security grounds; an end to anti-dumping on steel, pasta and other products; and access for Turkish builders to the US contracting market.

Turkey, a major steel producer, failed to win exemption as Trump slapped a 25% levy on imported steel and 10% charge on aluminum in March 2018. In August the same year, as political tensions with Ankara simmered, Trump doubled the duties for Turkey, making them 50% for steel and 20% for aluminum. In May, the levy on Turkish steel was reduced back to 25%, while Turkey’s participation in the GSP was formally terminated. According to a study by an Ankara-based think tank, Turkey and Russia were the worst affected by the hiked tariffs, with Turkish exports falling some 45%.

Washington’s removal of Turkey from the GSP program, which deprived an array of Turkish products of duty-free access to the United States, and its refusal to exempt Turkey from Section 232 undermine the $100 billion trade target right off the bat. Washington may have shown willingness for closer commercial ties, but Turkish requests for the removal of trade barriers have remained unanswered thus far.

According to Ilhan Uzgel, a prominent Turkish scholar of international relations, the $100 billion target is “too ambitious,” and balancing the trade should be the essential matter for Turkey. “What if the United States ends up with $90 billion in exports and Turkey with $10 billion? How does this benefit Turkey? The United States has a trade surplus with Turkey already, and changing this should be the [real] objective,” Uzgel told Al-Monitor. Turkish businesses, he said, will struggle to increase exports unless Washington eases tariff barriers.

Asked about Ross’ call on US companies to invest in Turkey, Uzgel said, “A call alone is not enough. The Trump administration has long urged US companies to invest at home. Investment conditions and market potentials are critical issues here. They may back investments in Turkey over China, but there are other countries with much lower labor costs.”

Turkey, he stressed, is in desperate need of investments that will create added value, and a few US investors will make little difference without a comprehensive, long-term industrialization program.

What about the impact of trade rapprochement on ongoing political tensions? As sanctions remain on the Congress agenda, could Trump weigh in in Turkey’s favor by emphasizing economic ties?

Erdogan has pinned hope on his personal dialogue with Trump. The US president has so far delayed potential measures against Turkey over the S-400s under the Countering America's Adversaries Through Sanctions Act, but he is unlikely to get Turkey off the hook. While in Turkey, Ross, too, asserted the prospect of sanctions.

In late August, after Russia began the second phase of the S-400 delivery, the House Foreign Affairs Committee turned up the pressure on Trump to penalize Turkey. Trump’s delay tactics might backfire and strengthen the pro-sanction camp in Congress. As an initial measure, Washington has removed Turkey from the F-35 co-production program through which Ankara was planning to acquire 100 jets.

Uzgel sees little likelihood that trade collaboration will soften political and military discords on issues such as the S-400s and northeastern Syria. Stressing that Washington often “compartmentalizes” its policies, he said, “The reaction to the S-400s, for instance, was similarly in the area of weapons. Turkey was removed from the F-35 program but faced no sanctions in trade. Regarding the sanctions on Iran, had Turkey not joined them, it would have faced sanctions in trade. The bargaining on Syria and the eastern bank of the Euphrates is within its own confines as well. Such has been the dynamic of bilateral ties, at least so far.”

In other words, the two countries are trying to show they are flexible and pragmatic, so much so that they can quarrel in one room and seek deeper cooperation in another. A few days ago, for instance, Erdogan cast doubt on Washington’s intentions in the joint plan for a safe zone to keep Syrian Kurdish fighters away from the Turkish border, grumbling that “our allies seem to be after a safe zone not for us but for the terrorist group.” The following day, he was welcoming Ross, asserting that US investors were welcome “to make use of all the potential” of the Turkish economy.

Thanks to the synergy between Trump and Erdogan — an odd blend of mutual understanding and bashing — the Turkish-US crisis has progressed in slow motion thus far. Yet Trump’s compartment strategy, based on punishment and reward mechanisms, might not last forever.