Is Turkish presidential system helping cause fall in AKP membership?

Recep Tayyip Erdogan’s realized goal for Turkey to have an executive presidency may be fast becoming his worst mistake: His party is losing members at the top and from the base and former colleagues are challenging him directly. Can Erdogan survive his party’s decay? 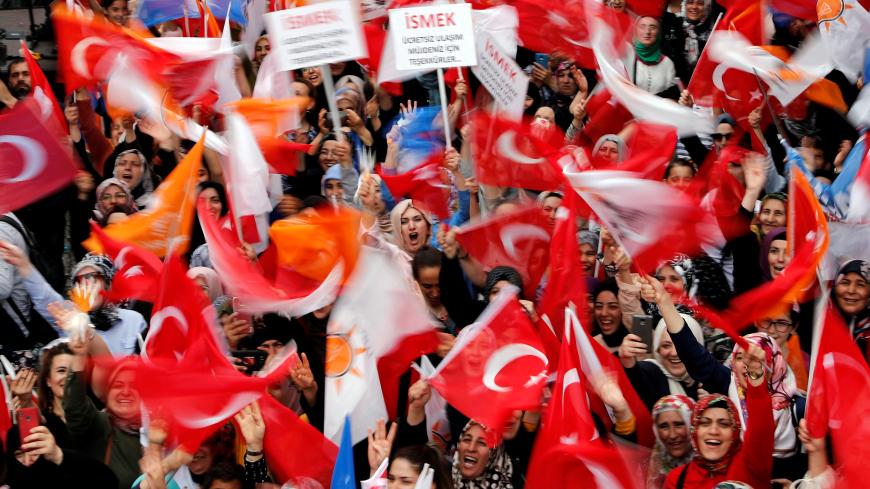 Supporters of Turkish President Recep Tayyip Erdogan's ruling Justice and Development Party wave flags as their mayoral candidate Binali Yildirim speaks during an election rally in Istanbul, June 21, 2019. Yildirim lost the election, however, to Ekrem Imamoglu of the Republican People's Party, showing that "Erdogan is not undefeatable." - REUTERS/Murad Sezer

In 2013, as news about fake memberships in the ruling party made headlines, a senior AKP official told me that this was “like when you face a bear; if you can make yourself appear bigger than you are, the animal will run away.” Indeed, for anyone in opposition, it was disheartening to hear the question, “How can you win against a party with 10 million registered members?”

That sums up the importance of member registration for Erdogan in the last 17 years. He always boasted about growing party numbers, with the total reaching up to 10 million members in 2018. The gap between the AKP and its rivals is significant. For example, the main opposition Republican People’s Party (CHP) has around 1.5 million registered members.

The high number of the AKP’s registered membership is particularly perplexing when we consider that most people in Turkey would refrain from making their party identity publicly known. Voter registration is automatic. Voters are not required to fill out any forms to register as they do in the US political system. However, membership in a political party requires filling out a form. Official party membership could produce more disadvantages than benefits. For example, central government employees are banned by law from being members of a political party.

On Sept. 5, speaking at an AKP gathering, Erdogan reminded his fellow party members that recruitment is a never-ending mission. He said that while the AKP had lost 290,000 members, "95% of that loss was due to death.” Yet a day after his speech, official government figures were released. The numbers show that from August 2018 until July 2019, the AKP lost about 800,000 members, around 7.4%. That number is the net decrease. Death is not an adequate explanation for such an abrupt loss. Data also shows that in the last two months, the party has lost over 56,000 members.

Recent polls are alarming for the AKP’s top echelons. In early September, the Metropoll polling agency reported a 10% decrease in Erdogan’s approval rating (down to 44%) in the last year. Another Ankara-based company, ORC Research, reported that those who said they would vote for the AKP if there were an election today is at 30.6%. When asked if they would still vote for a presidential system if they had another chance, 60% said “no” in the latest, mid-June polls. The criticism against the executive presidency is not just from the opposition but also from within the AKP. Erdogan has always boasted that the AKP has managed to evolve and renew itself periodically, one of the most crucial reasons why it has sustained a majority in the parliament. So what has changed in the last year? Why is the AKP’s majority eroding?

“Although official sources will release numbers, they will not let you look deeper to see who is quitting the AKP,” said a senior party member who has been working with grassroots right-wing politics since the mid-1990s and who didn’t want to be identified.

He added, “Yet I can tell you that three categories of losses worry us the most: alienated traditional conservatives, or political Islamists; women; and young adults, that is, 18- to 30-year-old voters. We are losing these groups fast and we don’t know how to get them back.” He figures that the losses are getting bigger.

Emrah Gulsunar, a political scientist from Lund University in Sweden, told Al-Monitor that the main question regarding the decrease in the number of AKP members "is whether the reasons behind it are random or not.”

A former member of parliament, Suat Kiniklioglu, said, “The drop in AKP membership is another indication that the AKP saga as we know it is over.” He said the process has been gradual, although measurable results have been witnessed recently. “The signs of this decline were actually evident by 2014 and we saw the first concrete result of that in the June 7 [2015] election when the AKP lost the parliamentary majority for the first time.”

Times are particularly challenging for the AKP. Over the last 17 years, some prominent members have quit the party and attempted to challenge Erdogan. But those were stillborn. The AKP had strong public support. Yet as the party's backing declines, gaining the support of AKP founders has become more valuable for the opposition.

One reason for party's increased vulnerability is the Erdogan-induced switch of the system from a parliamentary to a presidential one. Under the parliamentary system, a plurality generally would have sufficed for the prime minister's party. In the new system, where the president needs a majority to win, a vote loss of 1% or 2% could be costly to Erdogan. In some ways, Erdogan’s dream of an executive presidency has increased his dependency on the AKP. And depending on the success of the AKP in sustaining a majority in parliament may not be a well-calculated risk in the newly designed system. In the new system, the loss of a few points by the AKP could rock the boat when it comes to the presidential election. Politicians such as former Prime Minister Ahmet Davutoglu and former President Abdullah Gul, realizing this vulnerability, have seen their bargaining power rise. Although they still may not sway large number of parliamentarians or voters from the AKP, small numbers could suffice for a tremor at the presidential palace.

Aykan Erdemir, a senior fellow at the Foundation for Defense of Democracies in Washington, said, “The AKP seems to be losing both its political heavyweights as well as the rank and file at an alarming rate. The party has not only lost top figures like Babacan and Davutoglu, but nearly a million members within the last 12 months. So far, Erdogan has employed a dual strategy to prevent defections, offering lucrative rewards to lure some members and threats to intimidate others, but this has proven to be ineffective.” He added, “At this point, the Turkish president hopes that the disgruntled AKP members who are reacting to the government’s economic mismanagement will leave for his ally MHP [the ultra-nationalist National Movement Party] rather than Babacan and Davutoglu’s splinter parties in-the-making. If the MHP’s ersatz opposition fails to convince the AKP’s dissidents, the number of defections, particularly among the grassroots, could spike dramatically.”

The last reason is the most practical one. Everyone loves a winner. Gulsunar said, “It is not difficult to argue that one big potential reason behind this kind of decrease in the party membership is the recent local elections. The big loss of the AKP in the local election, materialized in the loss of big cities, including Istanbul, showed that 'Erdogan is not undefeatable,' and certain drastic changes in the political scene of Turkey might be imminent." Gulsunar said this may have played a role in how some party members have left the AKP to hold more prominent positions in the newly emerging political parties.

The CHP and other opposition parties won several prominent provinces in the local elections, pointing to reckless and lavish spending by former AKP mayors. In Istanbul, the new government is slashing the number of bogus or surplus employees hired by former mayors. Erdogan has spoken multiple times against the actions of Ekrem Imamoglu, the new mayor of Istanbul. The president was particularly strong in defense of those who were fired by the new administration. Imamoglu reasoned that those who were fired had no real jobs at the municipality but rather were taking in cushy salaries for being AKP cronies. Pro-AKP columnists have even quarreled among themselves in public over these jobs. We can expect further scrutiny of the AKP’s hiring and spending policies as several municipalities, including Istanbul, are on the brink of bankruptcy. Thousands of people, from mostly low-income groups, with little to no hope of securing a central government job, aim for the second-most secure position: a job with a municipality. Membership in the ruling political party makes lives easier for these individuals and their families. As the winner of major cities has shifted from the AKP to the CHP, a significant number of people are quitting the AKP, with many likely seeing this as their hope for possible employment through the CHP leadership.

Erdogan sought a secure and long-term hold on power and designed the executive presidential system for this goal. Yet the new system has magnified the existing internal rifts within party ranks, generating further vulnerabilities for both Erdogan and his party.