Turkey’s highest court has struck down a reporting ban surrounding a 2013 corruption probe, but some human rights defenders warn the win for press freedom may prove minor. 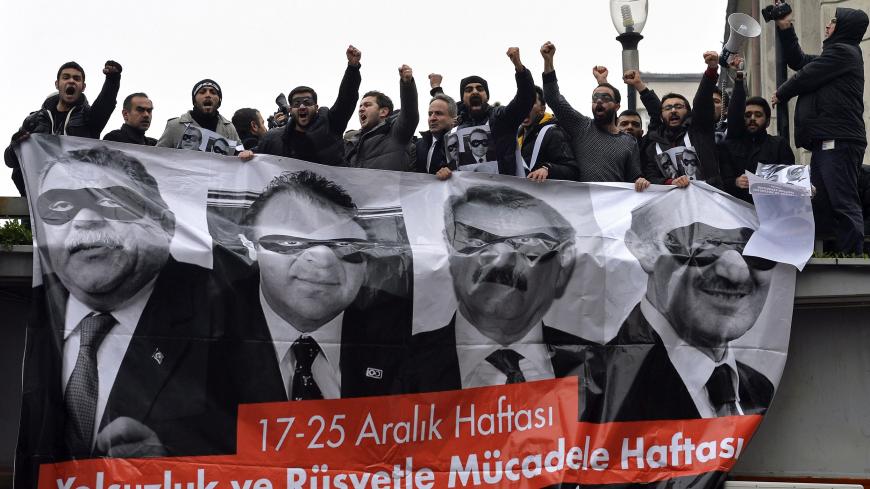 Turkey’s Constitutional Court has ruled unanimously that a reporting ban slapped on the work of a parliamentary commission set up to investigate corruption charges leveled against four former ministers in a quashed 2013 probe violated free expression and press freedom.

The court was responding to a complaint filed by opposition broadcaster Halk TV, which aired coverage of the corruption scandal implicating Turkish President Recep Tayyip Erdogan, who was then the prime minister, and his inner circle. In its ruling, the court suggested that the lower court had exceeded its jurisdiction when imposing the ban implemented supposedly to protect the reputations of the individuals being probed. The news blackout followed a petition filed in 2014 by the parliamentary commission itself. The government went into high gear to muzzle all reporting on the graft probe and fired and jailed the officers conducting it.

Allegations of corruption that have dogged Erdogan and his family ever since remain a no-go zone for the beleaguered Turkish press. Hence the ruling comes to many as a welcome surprise. But it's too early to say if it heralds any meaningful change in the sort of blanket repression that has led to the jailing of thousands of government critics, defenders warn. Kerem Altiparmak, a prominent human rights lawyer, suggested that the recent spate of magnanimity may be linked to more cynical calculations.

Altiparmak, together with fellow human rights lawyer Yaman Akdeniz and independent Turkish journalist Banu Guven, had also filed a petition against the gag order on the 2013 corruption probe, which toppled four cabinet ministers, including the former minister for EU affairs, Egemen Bagis, who was accused of receiving bribes from jailed Iranian-Turkish gold trader Reza Zarrab and was recently awarded a plum ambassadorship to the Czech Republic. The Constitutional Court ruled against Altiparmak and his friends, prompting them to lodge a complaint with the European Court of Human Rights (ECtHR).

Altiparmak speculated that the timing of the court’s decision in Halk TV’s favor was to pre-empt a likely penalty from the ECtHR. The Strasbourg-based body is poised to announce its opinion on the Altiparmak complaint. “Turkey will now be able to say of us, ‘They are individual citizens. Had they been a media organization the court would have ruled in their favor, as they did in the case of Halk TV,'” Altiparmak told Al-Monitor.

Last week a Turkish appeals court approved the release of prominent Kurdish politician Selahattin Demirtas in one of a slew of spurious terror cases for which he is facing up to 144 years. The move may have also been to avoid another hefty fine from the European court, where 7,100 cases were filed against Turkey in 2018 alone. Turkey was ranked an embarrassing 109th among 126 countries in the World Justice Project’s Rule of Law Index this year, behind Mozambique and Iran.

The ECtHR ordered Demirtas’ release late last year, saying his rights had been violated. But Turkey ignored the order and Erdogan said its decision was non-binding, even though Turkey accepted the ECtHR’s jurisdiction in 1990 in line with its now stalled efforts to join the European Union.

The ECtHR’s Grand Chamber is due to convene tomorrow to hear Turkey’s objections to that ruling and Demirtas’ counter-arguments. Altiparmak is in Strasbourg along with Sezai Temelli, who replaced Demirtas as the co-chair of Turkey’s largest pro-Kurdish party, the People’s Democratic Party, for what some say may prove a critical day for Demirtas’ fate.

Erdal Dogan, a human rights lawyer who has met with Demirtas in prison, said he did not harbor much hope, no matter the outcome. “I don’t believe the current government makes decisions on the basis of what the European Court decides or not. It makes them on the basis of what it feels serves its interests at a given moment,” Dogan told Al-Monitor. “The seesawing we are witnessing in the courts is more likely linked to a quiet but escalating battle between anti and pro-Western reformist actors in the judiciary, including in the Constitutional Court.” The latter may be weighing a future in which Erdogan, Turkey’s longest serving leader, is no longer in charge.