Syrians ready to flee to Turkey as soon as border opens

Syrians recently protested in Idlib, calling on Turkey to open a humanitarian corridor so they can escape the government shelling. 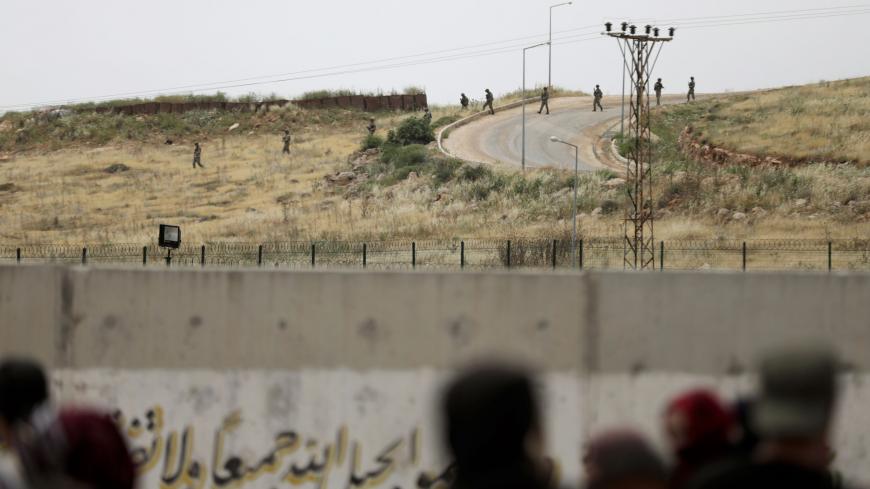 Turkish soldiers patrol at the Atmeh crossing on the Syrian-Turkish border, as seen from Idlib province on the Syrian side, May 31, 2019. - REUTERS/Khalil Ashawi

IDLIB, Syria — Ramez Dyoub hopes he and his family can soon cross the Syrian border to reach safety in Turkey, as they have been forced to leave their hometown of Khan Sheikhoun as the Syrian regime seeks to crush the opposition's last stronghold, Idlib province.

Tens of thousands of Syrians have fled to the Turkish border with northwest Syria in the past couple of weeks, officials said, and Turkey previously allowed in about 3.66 million registered refugees from its neighbor since 2012. Turkish President Recep Tayyip Erdogan expressed concern in his Sept. 5 speech to his Justice and Development Party (AKP) in Ankara over the new wave of displaced Syrians from Idlib, saying the number of refugees might reach 1 million.

Turkey is the dam keeping the flood of refugees from reaching Europe, as part of a $6.6 billion agreement reached with the European Union in 2016. Erdogan is threatening to open the gates unless it receives more help from the West, and a "safe zone" is established in northeastern Syria to keep armed groups of Syrian Kurds away from the Turkish border. Work on the zone is underway with US participation.

Dyoub and his family are living in a small tent in an agricultural field near Atmeh. They escaped the shelling near Khan Sheikhoun, but he said his hopes of returning were dashed after government forces seized the city Aug. 20.

“The situation in Idlib is deteriorating by the day. No place is safe, and we don't know when the battles might reach the borderline," Dyoub told Al-Monitor.

The Syrian government offensive on Idlib so far has rendered 400,000 people homeless, according to the United Nations. Most of them settled near the borders, and half of the displaced live outside camps and reception centers, under trees or in the open air.

“With support from their Russian allies, government forces are advancing and controlling one town after the other. Syria is no longer safe, and displacement to Turkey is the only option," Dyoub added.

Apart from some violations, a precarious calm has prevailed over at least some of Idlib since the Russian Ministry of Defense announced Aug. 31 a cease-fire that Damascus agreed to while maintaining its right to respond to any violation.

On Sept. 8, one person was killed following the government forces’ artillery shelling of Kafr Nabl in southern Idlib, while other towns such as Gergnaz, Telmens and Maarshmarin were shelled, with no deaths reported.

Many Idlib citizens fled for the border because of fears the cease-fire might collapse and government forces might resume their ground attack.

“If the borders weren't closed, I wouldn’t have flinched before leaving," Dyoub said.

Hundreds of citizens in Idlib protested Sept. 6 and called on Turkey to open a humanitarian corridor for the displaced trying to escape the shelling. They also called on the international community to assume its responsibilities and protect civilians in Idlib.

Turkish Deputy Minister of Interior Ismail Catakli said Sept. 4 that the concerned Turkish institutions are putting plans in play and taking precautions to deal with possible waves of displaced people, and that they realize the seriousness of the situation in the region.

Over the past three years, Idlib has been the last resort for Syrians who were forced to leave their hometowns elsewhere in the country, escaping government-held territories such as Aleppo, Homs, Rif Dimashq and others.

People in Idlib got a glimpse of hope when the Turkish army built 12 observation posts around Idlib as part of the deescalation plan reached in September 2018 with Russia.

Ryad al-Hussein, a media activist who lives in Idlib, told Al-Monitor that people considered these posts as demarcation lines between the government and opposition. However, when Syrian government forces encircled the post in Morek on Aug. 23, citizens began fearing the collapse of the Russian-Turkish agreement.

“The government forces controlled a wide geographic stretch in their attack. But encircling the Turkish post in Morek startled the citizens and gave them the impression that other Turkish observation posts would not halt the advancement of government forces or uphold the deescalation agreement," Hussein told Al-Monitor.

As Turkey fears a new displacement wave, it is trying to reach an understanding with Russia to ensure stability in Idlib on the one hand, and pressure EU countries to provide political support on the other.

Erdogan asserted in his Sept. 5 speech that, through cooperating with Russia, Turkey is trying to maintain security in Idlib and ensure that Syrians living there remain in their homes.

He continued, “The international community, specifically the EU, did not give us the needed support to share this burden. We might have to open the borders if this goes on.”

Turkish Vice President Fuat Oktay said in a Sept. 6 press statement that Erdogan is serious about opening the gates to Europe for refugees in Turkey. He said, “This is no joke or threat, but a reality.”