How much are Israel's elections costing it?

With only about 70% of Israelis bothering to vote, maybe it's time to reconsider election day being a national holiday and therefore a paid vacation day for workers. 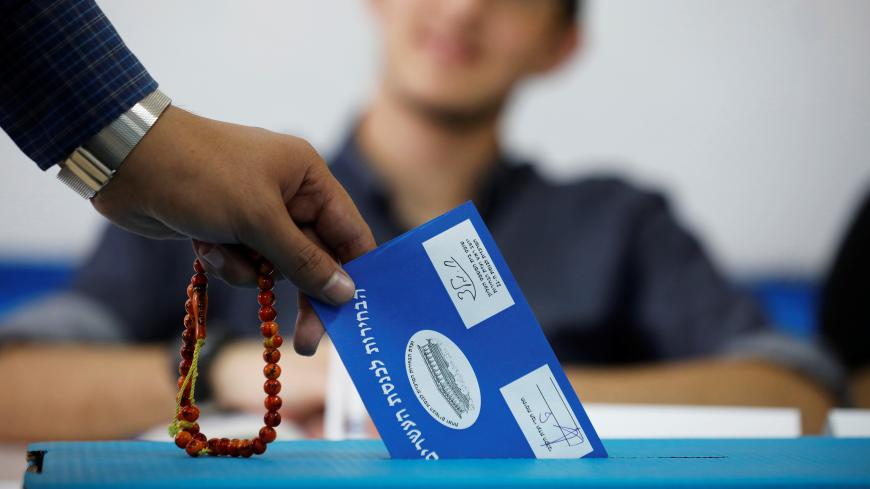 The law proposed by Prime Minister Benjamin Netanyahu and the Likud for placing cameras in polling stations in Arab communities fell as fast as it was proposed on Sept. 9. Despite its short life, it raised, in a roundabout way, another important issue: the cost of the election to the Israeli market and its ramifications for the Israeli economy.

A senior official at the Ministry of Economy and Industry who is involved in economic planning and who spoke to Al-Monitor on condition of anonymity said, “Politicians on all sides should get this. If, God forbid, they won’t succeed in forming a government, and there would be a third election, the Israeli economy would enter a serious, catastrophic crisis, from which it would be very hard to recover.”

When calculating the economic cost of the election one must consider that election day is a national holiday. How much this holiday costs the market is a complicated question, but according to data from organizations representing the commercial sector, one day off costs NIS 2 billion to NIS 2.5 billion ($560 million to $710 million). Of this amount, at least NIS 1.5 billion ($420 million) represents the loss of income for those workers who do not go in to work and overtime of 200% for those workers who do work on the holiday, such as public transportation workers, communications and critical services workers at hospitals, police and fire departments, and so on.

This raises a question that must be asked: Is it justified to declare a day off when the voting rate is typically less than 70%? Turnout for the April election was 67.9%.

Yisrael Beitenu Chairman Avigdor Liberman supports canceling the holiday and recently used the meeting of the Knesset’s Organizing Committee to announce that he also supports the camera bill, in principle, on one condition. Liberman argued, “As the camera bill is brought before the Knesset, this is an opportunity to fix the issue of the election holiday so that only those who vote get a day off. It’s clear to us that just as last time, the Likud and the ultra-Orthodox did their best to make sure that the Election Day Holiday Law doesn’t pass, [and] they’ll do the same now. This just proves that the Likud and the ultra-Orthodox want to discourage secular voters and will do everything to establish a government run by Jewish law.”

Yisrael Beitenu’s proposal is that only people who vote — and who receive confirmation that they did so from the election commission — would be eligible for a paid vacation day. Knesset member Oded Forer (Yisrael Beitenu) tried to promote a similar law before the current Knesset dissolved in May, along with compensation for small business owners for the absence of employees on election day. Yisrael Beitenu points to the example of Australia, where there is a legal obligation to vote. Anyone who fails to vote is fined unless they have a valid reason for not doing so. Thus, the voting rate in Australia hovers around 90%.

The failure of the camera bill in the committee took Liberman’s proposal off the table, but the Chamber of Commerce, which represents businesses and business owners, and the Manufacturer’s Association are continuing their fight against the election holiday and hope that the law will indeed be changed. One of their main arguments is that low voter turnout shows that the holiday is not achieving its aim of increased participation in elections.

The September election has another cost that is hard to calculate: the freezing of government economic activity until the formation of a new government. Since the announcement in December 2018 of an election in April, work has stopped on government reforms. Government plans have been frozen, including Finance Minister Moshe Kahlon’s plan to subsidize homes for first-time buyers that was supposed to take effect in 2019. Work on a new five-year plan for the Arab sector has halted. The previous plan, which cost NIS 15 billion ($4.2 billion), is slated to end in 2020, and Arab municipalities had expected the new plan to continue development in their sector. As the government has been in election mode for a year, this could cause gains made under the present plan to be lost, and for example, for the construction of new industrial zones to be delayed.

The direct cost of the election to the government's budget is half a billion shekels ($140 million), NIS 250 million ($70 billion) of which goes to funding the parties; a similar amount funds the election itself, paying for election commission employees, observers, polls, counting votes, publicity, security, and so on. The parties themselves, at least the large and medium-size parties, expend tens of millions of shekels each on campaigning. To do so, they usually need more money than they receive from the state budget for party funding, which is determined by the size of each list, that is, each party’s number of serving members in each of the last two Knesset sessions. In April’s election, the Likud spent NIS 83 million ($23 million), and of that NIS 47 million ($13 million) was from state party funding and NIS 36 million ($10 million) was from a special loan guaranteed by the government. Blue and White received NIS 47 million in state funds.

The senior official from the Ministry of Economy and Industry remarked, “[The September election] is half an economic catastrophe because of the government expenses that increase the government’s budget deficit. In fact, because of the election, there’s no discussion of the day after, that is, how to reduce the deficit.” In July, the deficit totaled 3.9% of gross domestic product, a budgetary hole of NIS 14 billion ($4 billion).

The official noted that the time it takes to form a new government after the election and for new ministers to get to work will delay the full functioning of government offices for several months. Until then, all plans are on hold.