Prime Minister Benjamin Netanyahu failed to garner a 61-seat majority in the elections, and could be now facing his political demise. 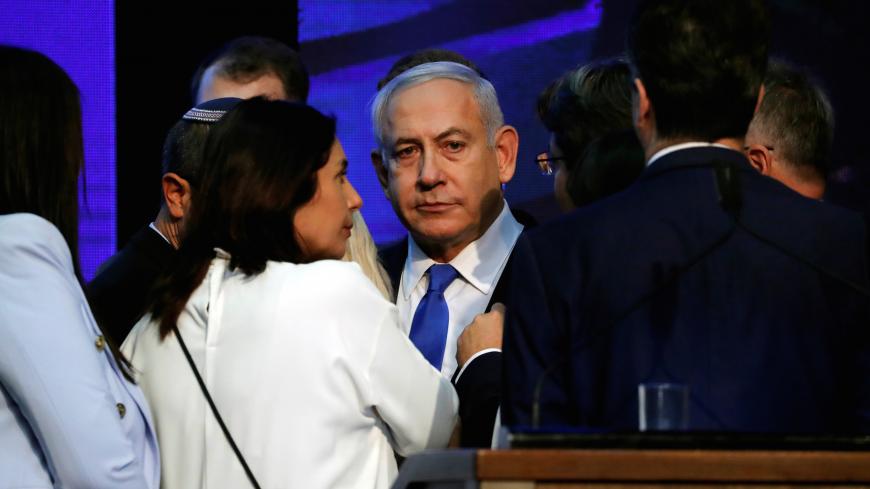 The Israeli elections ended in a tie, which is actually a rather resounding defeat for Prime Minister Benjamin Netanyahu. It is only two weeks before the dramatic hearing awaiting Netanyahu by Israel’s Attorney General Avichai Mandelblit on Oct. 2-3, and we can already declare that the prime minister will not be able to form an “immunity coalition” (a right-wing coalition that could pass legislation protecting Netanyahu from indictment).

Israel’s judicial system has been salvaged; the High Court of Justice has been spared from annihilation. Even the media can breathe a bit more easily now. Netanyahu is five seats short of the 61 seats he needs to complete the dismantling of Israel’s democracy and this, evidently, will not happen.

The Israeli soap opera exceeds all imagination. Yisrael Beitenu leader Avigdor Liberman, who has been languishing at the bottom of the political heap in recent years, reinvented himself in a spectacular maneuver and morphed into an exclusive kingmaker and dragon-killer. Assuming there are no major surprises, Liberman will emerge as the one who inflicted the final political blow on Netanyahu. The man who served as Netanyahu’s faithful assistant in the late 1980s, became the prime minister’s political hangman.

The bad blood between those two had continued over many long years. Liberman blames Netanyahu for building a case against Yisrael Beitenu just prior to the 2015 elections (senior Yisrael Beitenu members were suspected of corruption); this thwarted, so he believes, Liberman’s big plans to become Israel’s prime minister. Later on, when Liberman served as Netanyahu’s defense minister, the prime minister blocked all of Liberman’s initiatives and turned his former assistant into a scarecrow. In the course of the present campaign, Netanyahu went for Liberman’s jugular with all his strength. The Likud went to tremendous efforts and invested much money on the Israeli Russian voters, in their attempts to kick Liberman out of his own territory. That goal failed. Now it’s Liberman’s turn to kick back.

The political map is at a decisive stalemate. After counting 92% of the votes, the result is that Netanyahu lost nine seats. (After the merger with Moshe Kahlon’s Kulanu party and the deal signed with Zehut party of Moshe Feiglin, the Likud was worth at least 41 seats.) Blue and White lost three seats. None of the sides can establish a homogenous government with its natural partners. Under such circumstances, a unity government is a self-evident solution and we see Liberman’s efforts in that direction. The problem: Blue and White declared that they will not sit with Netanyahu while an indictment hangs over him. A possible solution: rotation, and Blue and White will demand to be first. In other words, Benny Gantz as prime minister for two years, then Netanyahu.

The problem: There is no chance that Netanyahu will agree to such a situation, which would mark the end of his political career. Israeli law allows only a prime minister to serve in the course of a criminal law trial, while a regular minister must resign as soon as he/she is served with an indictment. Therefore, if Netanyahu will not be first in the rotation, he will be forced to resign from a ministerial position in the government, once served with an indictment (which will probably happen within about two or three months). In other words: Netanyahu’s finished.

Netanyahu’s magic has dissipated this week. The Israeli public told him “no more” and marked him with a giant red X. This was the man who spared us no political shenanigans, incitements or a kick in the pants of the law and convention in order to reach 61 seats. In recent days, for the first time since he became prime minister, Netanyahu even exhibited worrisome signs of irresponsibility in the defense/security arena. He announced his intentions to annex the Jordan Valley without holding a discussion or any kind of consultation with the defense people or the Cabinet. On that same day last week, Netanyahu almost dragged Israel into war behind the back of the defense system and without real authorization from the Cabinet.

The distrust between the prime minister (who also serves as defense minister) and the Israel Defense Forces and defense system has reached an all-time low. Clearly, Netanyahu’s sophisticated checks-and-balances system have blown out in his race to the abyss. On election day, he flagrantly broke the law several times when he allowed himself to be interviewed on radio stations identified with the right, despite an express instruction that it was forbidden to do so. Netanyahu behaves like a drowning man who hangs on to straws, on the way to the bottommost depths. But even the straws have disavowed him. He has no more rabbits to pull out of his hat.

There are two people who hold the key to extricating Israel from the political chaos it has endured over the last nine months. The first is Liberman. This morning, he again made it clear that he will not join a narrow right-wing/ultra-Orthodox government, nor any narrow government. Liberman, with his sharp senses, understood that Gantz has already started to send out feelers to the ultra-Orthodox parties in an attempt to create an option for a narrow government that would force the Likud to join the unity deal, but as a weakened partner. If Gantz should actually adopt such a course of action, he might lose Liberman. It is a very dangerous minefield that could well push Liberman back to the right.

The second key personage is that of Israel’s President Reuven Rivlin. Netanyahu is now entirely in Rivlin’s hands, and that is the last place on earth he wants to be. These two men also share a ferocious and eternal hatred for one another. Netanyahu did everything to prevent Rivlin from becoming president. Will Rivlin now do everything in his power to prevent Netanyahu from remaining prime minister? It is not clear. What is clear is that Rivlin will do everything to stop Netanyahu from dismantling the Israeli democracy. Rivlin will also push for a unity government and will have to square the impossible circle that was created around the potential partners: Netanyahu’s desperate need to remain prime minister, vis-a-vis the absolute refusal of Blue and White to be part of a government with a prime minister facing a criminal trial.

To this we must add Mandelblit, who will have to decide in October whether the indictments will be served, watered down, or shelved. Mandelblit belongs to that select group of people who were able to sigh in relief the morning after the elections. He, too, was on Netanyahu’s “Most Wanted” list; he, too, was on the prime minister’s sights; and he, too, was reborn on the day after. However, the big challenge is still before him.