Netanyahu down but not out

Despite the disappointing numbers emerging from Israel's election, Prime Minister Benjamin Netanyahu is telling his supporters that he is not done yet and that he intends to fight. 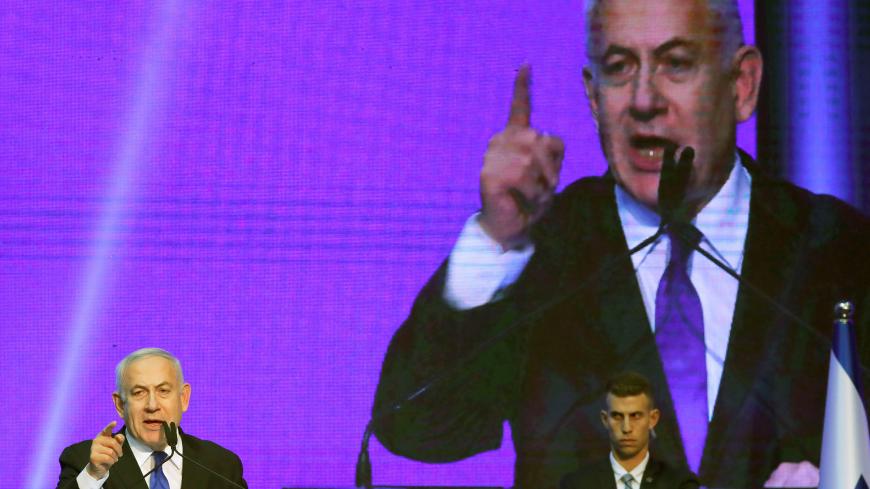 Prime Minister Benjamin Netanyahu reached the finish line of the most important election in his life having failed to achieve his two objectives. His bloc of right-wing and ultra-Orthodox parties did not win the 61 seats he needed, and his own Likud was not the largest party.

Worrying indications that this might happen accumulated throughout election day, but Netanyahu kept fighting, going out to Jerusalem’s Central Bus Station and the Mahaneh Yehuda market to encourage people to vote. And yet, by afternoon, the feeling in the prime minister’s Jerusalem residence, which also served as Netanyahu’s campaign headquarters, seemed to be that things were spinning out of control. Arab voters ended up going to the polls in droves. Seats that once belonged to Moshe Kahlon’s Kulanu, which was integrated recently into the Likud, scattered every which way and the far-right Otzma Yehudit was well below the electoral threshold. Nevertheless, Netanyahu being who he is, he kept fighting until the polls closed.

Netanyahu was prepared for the possibility he would fail to amass 61 seats. Within minutes of the TV stations releasing their exit polls, Netanyahu began circling the wagons with the heads of the ultra-Orthodox parties, Yamina and top Likud officials to stabilize his bloc and signal that he is still a relevant player with a united party and camp behind him.

It was exactly how he reacted to his devastating defeat in 2006, when the exit polls on election night showed that the Likud had collapsed, winning only 11 seats (it picked up its 12th seat the next morning). Rumors of a putsch hung over the party. Back then, Netanyahu knew that he had to appear before the party and show himself as determined and in control to unite the rank and file around him. He recognized how sensitive the situation was. Any sign of weakness or hint of uncertainty would be interpreted as an admission of failure and maybe even determine his fate. While Blue and White celebrated his defeat with considerable restraint, while the Joint List leaders were absolutely jubilant over his downfall and while Yisrael Beiteinu leader Avigdor Liberman delivered what sounded like a victory speech, stressing that he was in no one’s pocket, Netanyahu did what he had to do: be seen in public.

To his credit, it must be said that he pulled himself together right away. It was a little after 2:00 a.m. when his motorcade left Jerusalem for the Tel Aviv Conference Center, where a small group of party activists and Likud seniors were waiting for him. The first to signal that Netanyahu could remain calm, that there was no effort underway to depose him, was Knesset member Gideon Saar. Saar has been mentioned frequently as Netanyahu’s possible heir and was even accused by the prime minister of subversive activity to remove him from office. And yet, when asked his reaction to the results, Saar was perfectly clear: “The only headlines tonight will come from Netanyahu’s speech. Look for cracks elsewhere.’’

It wasn’t out of love for Netanyahu that Saar responded this way. It came from a place of political insight and a deep understanding of the Likud. Had he come out against the prime minister when he was down, Saar would have destroyed his own chances of becoming the party's head.

Netanyahu entered a hall that was two-thirds empty. The Likud supporters who still waited for him despite the very late hour seemed confused and disturbed, as if they were trying to come to terms with the new situation. After 10 years in power, it looked like the end. Netanyahu’s wife Sara accompanied him inside, but in a departure from similar events over the last few years, she did not stand beside him on stage. Also, unlike previous years, Netanyahu devoted all his attention and compliments to the senior Likud officials and party activists in the hall. In his hour of weakness, Netanyahu needed them more than anyone. He began his speech with a long list of thanks to the Likud’s ministers, activists, chapter heads and mayors. “We worked shoulder to shoulder. We stood together united in this campaign, and we will continue to stand together united as we face the tasks ahead of us, for the sake of the Likud and for the sake of the people of Israel,” he told them.

Netanyahu may have managed the campaign entirely on his own, but now he wanted to share the burden with them and create a sense of common destiny. Once again, he did not miss a chance to lash out at the media for what he considers biased coverage. “We worked together and achieved the unbelievable, despite the one-sided coverage we received,” he said. He went on to speak about the country’s security challenges, Iran and the US peace plan. Netanyahu managed to cast an air of illegitimacy over the possibility of the Joint List cooperating with Blue and White and Liberman, and introduced the term “Zionist government” into Israel’s political lexicon. As he put it, “There will not be, nor can there be, a government that relies on the anti-Zionist Arab parties … parties that glorify and celebrate bloodthirsty terrorists who murder our troops.”

Even as a lame duck, and even if his plans to obtain immunity have faded into oblivion, Netanyahu is playing well with the cards he still holds. As long as the Likud remains united behind him, Blue and White will have a hard time meeting the condition it set for itself of forming a national unity government with the Likud but without Netanyahu. The Likud is Netanyahu’s security net, his key to survival. As long as things remain that way, Blue and White leader Benny Gantz does not have the numbers to block Netanyahu and certainly not enough seats to form a government. Netanyahu has more pieces to play.

Less than 24 hours after the closing of the polls, Netanyahu had managed to rally all of the right-wing and ultra-Orthodox parties. He announced that they will conduct the coalition negotiations together, under his leadership, thus thwarting Liberman's unity government initiative.

An election without a clear winner means that Israel and its political system will continue to operate in a state of uncertainty. Netanyahu may have lost his reputation as unbeatable. He may have lost precious seats because of the deals he made with Kahlon and Zehut leader Moshe Feiglin. Meanwhile, the legal clock is still ticking, with his criminal hearing right around the corner. Nevertheless, Netanyahu is far from giving up. We will find out over the next few days how strong his alliance with the ultra-Orthodox parties really is, whether the Likud will continue to support him and whether Liberman will relax his demands or continue to hold Netanyahu’s political and legal fate in his hands.