Regional conflicts and international tensions, along with money, are roadblocks to Iraq's pressing interest in upgrading its missile defense system. 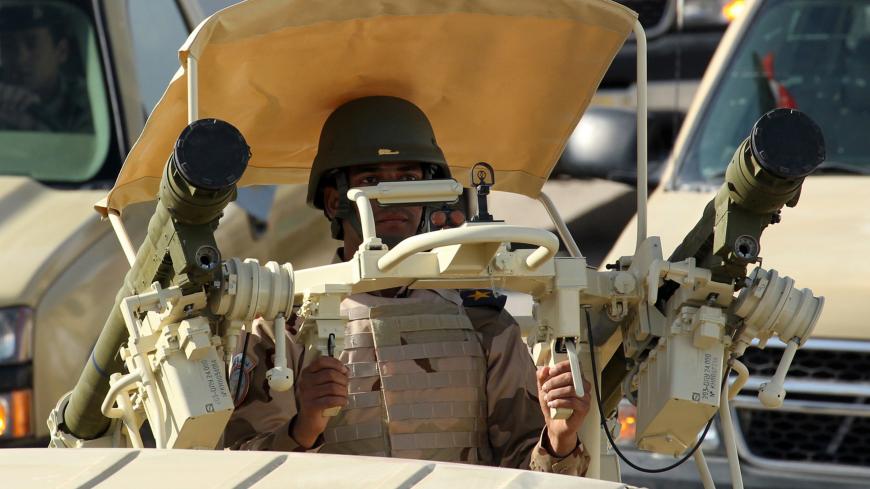 A member of the Iraqi army sits on a vehicle mounted with a man-portable air defense system during a yearly military show, Baghdad, Iraq, Feb. 1, 2015. - SABAH ARAR/AFP/Getty Images

Iraq recognizes its urgent need to develop a defense system to prevent violations of its airspace and targeting of its Popular Mobilization Units (PMU) sites. Whether the solution will be Russia's S-400 missile defense system has been a matter of contention for many months.

Hisham al-Hashimi, a security expert at the Nahrain Center for Strategic Studies, told Al-Monitor that increased talks about beefing up security are probably an attempt to allay the anger of the Shiite parties supporting the PMU, after its sites were attacked on several occasions recently. On Sept. 14, the Iraqi Ministry of Defense said the PMU had transferred its weapons to the ministry’s warehouses for protection.

In May, Russian news agency TASS reported that Iraqi Ambassador to Russia Haidar Mansour Hadi had said the Iraqi government had decided to purchase the Russian S-400 missile system. But on Sept. 19, he told Rudaw no discussions about a purchase have even taken place. In between, undisclosed Arab sources told Asharq Al-Awsat news Sept. 7 that PMU leader Faleh al-Fayyad made it known during his recent visit to Moscow that he wants Iraq to purchase either the S-300 or S-400 missile system. The sources also said Tehran has encouraged Baghdad to do so. Many factions of the PMU militia are affiliated with Iran.

Khafaji did not confirm any official decision to purchase the Russian S-400 system. He added that Fayyad and parliamentary committees in charge of arms contracts “are well aware that such a deal will not see the light of day unless the United States approves of it, and it does not." However, Iraq might be able to negotiate something else, given its good relations with both the United States and Iran, he added.

Fadel Abu Raghif, a security analyst and expert on extremist groups who is close to Iraqi intelligence, told Al-Monitor, “It's far-fetched for Iraq to acquire S-300 and S-400 missile systems from Russia, because the United States will not allow it. That's not to mention that some neighboring countries would consider the establishment of such systems a threat to their national security.”

Instead, “Iran could take advantage of Iraq’s desperation to get the Russian air defenses, and the US MIM-104 Patriot [surface-to-air missile defense system], and could provide it with systems of the same caliber and technological capabilities under a different name."

Abbas Sarout, a member of the Iraqi parliament’s Security and Defense Committee, told Al-Monitor, "The United States is preventing Iraq from importing weapons, especially advanced air defense systems and long-range missiles. … This would allow Israel to target Iraq at any time without any deterrence, which would keep the lid on Baghdad."

Ahmed al-Sharifi, a military analyst and retired pilot of the Iraqi air force, told Al-Monitor there are other reasons that prevent Iraq from sealing a deal with Russia. “There is no unified political stance in Iraq and the budget is not enough to afford a costly deal. That's not to mention that the religious authorities in Iraq support the PMU's integration into the military and security institution,” Sharifi said.

“The alternative to this impossible, costly deal is the actual implementation of the Strategic Framework Agreement [from 2008] with the United States because it will add significant resources to the military infrastructure, and provide training and equipment,” Sharifi noted. The agreement calls for broad-spectrum cooperation between the countries.

He added that to implement the deal, “There must be an official political decision to settle the issue.”

But such a decision no doubt will be influenced by the contentious US-Iran situation. Iran controls any step by Iraqi Prime Minister Adel Abdul Mahdi — whose political strength is questionable — toward the purchase of a sophisticated air defense system, whether from Russia, Washington or Iran.

According to Moin Kazimi, a PMU leader, the Iraqi forces allied with Iran or showing support for it are pushing for a decision. “Iraq needs advanced air defense systems and to develop them in cooperation with Iran, which possesses state-of-the-art techniques and can help Iraq in this area,” Kazimi said.