Iraqi prime minister trip to China has paved the ground for China to invest in Iraq. 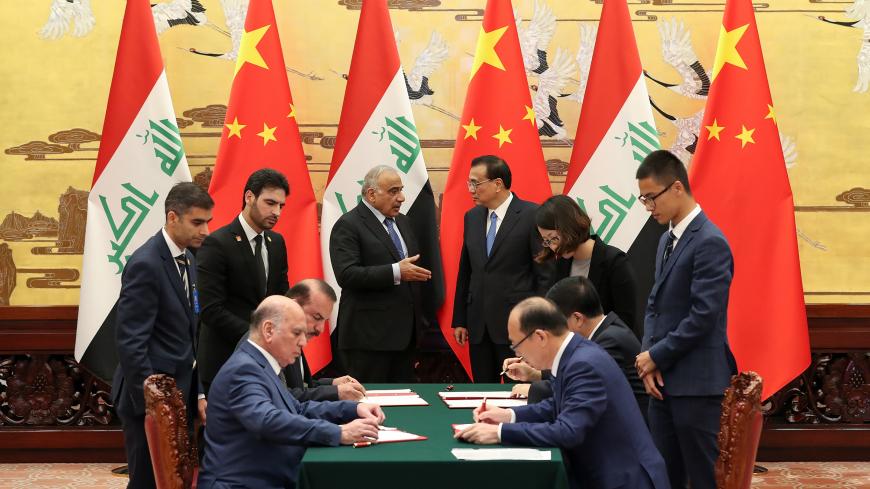 Iraqi Prime Minister Adel Abdul Mahdi (behind table at left) and Chinese Premier Li Keqiang (behind table at right) attend a signature ceremony at the Great Hall of the People, in Beijing, Sept. 23, 2019. - Lintao Zhang/Pool via REUTERS

Iraqi Prime Minister Adel Abdul Mahdi’s visit to China from Sept. 19-23 indicates a consolidation of an increasingly mutually beneficial relationship between the governments in Baghdad and Beijing, which the premier described as a “quantum leap.”

While Iraq seeks to benefit from China’s economic fortitude and crucial reconstruction financing for infrastructure, such investments enable Beijing to increase its influence in the Middle East and beyond while securing access to Iraq’s oil fields.

China and Iraq’s ties have solidified in recent years, particularly amid China’s increasing investments. China’s bilateral trade with Iraq had surpassed $30 billion by 2018, with an increase of around 10% each year, said Zhang Tao, the Chinese ambassador to Iraq.

While receiving Zhang in early August, Iraqi President Barham Salih said that securing Chinese investment had long been Iraq’s goal and that Baghdad was hoping to secure greater Chinese ties.

"Iraq is willing to continuously strengthen exchanges at all levels, deepen the strategic integration of each other's development strategies, enhance strategic cooperation under the framework of the Belt and Road Initiative and promote the new strategic partnership between Iraq and China," Salih said.

China has adopted more assertive economic and foreign policy ambitions under President Xi Jinping, with greater investment and shipping lines across Central and West Asia and Africa, driven by the Belt and Road Initiative codified in 2015.

According to a 2018 BMI Research report, this helps China gain increased influence in Iraq while further securing Belt and Road ambitions.

“China will aim to garner geopolitical influence by participating in broader reconstruction efforts in a country lying along a key artery of its Belt and Road initiative,” said the report released to Arab News.

China has taken advantage of instability that has resulted from years of war to make the case for its investments with Baghdad.

“The Iraqi government is disappointed with the funding it gets from international donors, like the Americans, who have neglected the reconstruction issue. Therefore, in his visit to China, the Iraqi prime minister had gone in with the aim of winning extra favor from Beijing, to secure a lot more funding from them,” Ahmad Kinani, an Iraqi researcher, told Al-Monitor.

Kinani said investment is needed in areas liberated from the Islamic State "and where there is still potential instability. Iraq needs infrastructural developments, and China is offering to help.”

China has used these investments to help secure access to the country’s gas and oil fields, particularly as it has focused on rebuilding infrastructure in these sectors.

“One area that China is helping in is developing oil fields. Baghdad is trying to entice China with oil to secure greater investment from Beijing. So if this really goes through, it will be a win-win partnership for both states,” Kinani said.

Russia and China have both sought to gain from Iraq’s oil and gas fields, as Baghdad has tried to operate on a similar development level as Iran.

Kinani said Beijing's lower oil tariffs make Chinese investment more appealing and cheaper for Iraq. This could put China in a stronger position to gain more economic influence in Iraq than Russia while securing a natural asset Beijing depends on.

Husham al-Hashimi, a researcher and member of the Iraq Advisory Council, told Al-Monitor that one past obstacle for increased Chinese investment was security and that Iraq's security gains needed to be consolidated to secure continued future Chinese investment.

Hashimi said Iraqi bureaucratic restrictions are still an obstacle for free-flowing development aid from Beijing. Loosening them would help the Iraqi government secure its wishes for Chinese investment, he added.

As Chinese investment is increasing, Iraq’s security situation is clearly now less of a deterrent to investment, particularly after the government reclaimed areas from the Islamic State in 2017.

Meanwhile, if Chinese investment further stabilizes Iraqi security, this could further increase Beijing’s desires to sink money into the country.

Yet while Chinese investment may consolidate ties with the Iraqi central government, the financing may not immediately improve local communities. “Much of the investments will mostly involved the Iraqi [central] government. While they will be the ones getting the money from these investments, they will likely not invest it directly into disaffected communities,” Kinani said.

He said a focus of winning over the Iraqi government rather than improving local communities has limited China’s genuine soft power in Iraq.“People in cities are seeing Chinese companies emerging and this impacts local business and labor. Yet meanwhile there have been no improvements to the social and economic standing of individuals. Ordinary citizens are complaining about this, and it creates deeper social frustrations,” Kinani added.

While China has invested in international roads, highways and railway projects in Iraq in a drive to fulfill its Belt and Road Initiative goals, China’s reconstruction in Iraq has recently focused more on social infrastructure. In early August, the China Construction Third Engineering Bureau signed a $1.39 billion deal to build medical, residential and education facilities across southern Iraq.

Also, the China Machinery Engineering Corp. has completed 80% of a project to build a power plant, which consists of two production units of 630 megawatts each, said Basim al-Bazi, a manager of the project. The plant is due to be finished next year.

China in the Mideast
Economy and trade
Islamic State