Egypt has been known for its star-studded festivals and concerts. Lately, however, many regional celebrities have been staying away. 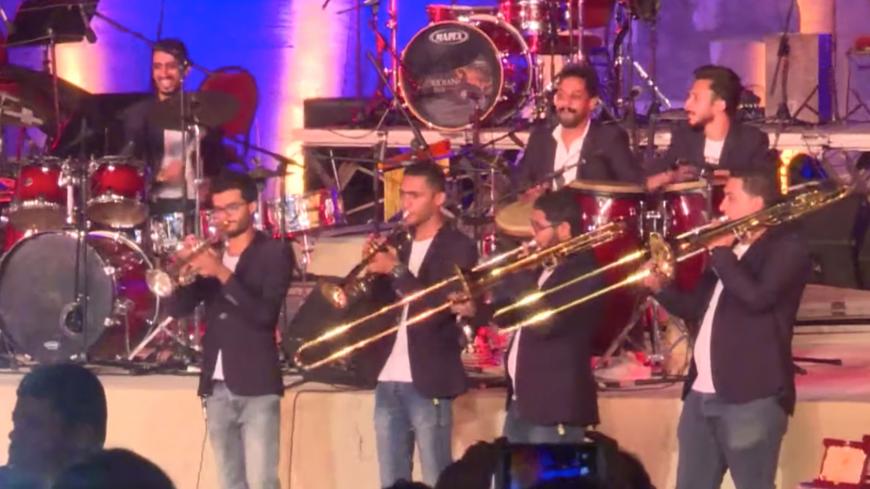 Performers at the Salah Al-Din Citadel International Festival for Music and Singing, Cairo, Egypt, seen in a still from a video uploaded Aug. 19, 2019. - YouTube/dmc

CAIRO — The 28th edition of the Salah Al-Din Citadel International Festival for Music and Singing is undoubtedly a success insofar as attendance is concerned. The festival took place Aug. 12-Sept. 2 and was attended by 13,000 spectators; 42 concerts took place. However, the festival — which prides itself on being international — had one major problem: It had just three singers from abroad.

For many organizers in the entertainment sector, the weak presence of foreign artists at Egyptian international festivals is becoming far too common. Ouf Hammam, president of the Alexandria International Song Festival — a private festival under the supervision of the Ministry of Culture — admitted Aug. 1 that the 16th edition of his festival would include only two concerts by Arab singers: Nawal Al Zoghbi from Lebanon and Sofia Sadek from Tunisia. A few days later, the Alexandria festival announced the cancellation of the festival due to the lack of resources and the health issues of its president.

Regional stars have also been conspicuously absent from live concerts. Egyptian TV Nights — concerts organized by the Egyptian Radio and Television Union throughout the summer — used to host about two dozen of Arab stars from the region. But this year, only five singers — Lebanon's Haifa Wehbe, Dolly Shahine, Ragheb Alama, Yuri Mrakadi and Tunisia’s Saber Rebai — showed up.

So what's keeping the region’s celebrities stay away?

Myriam Fares, dubbed the “Queen of Stage” because of her lively dances, said she scaled down her concerts in Egypt after the 2011 revolution because Egypt simply could not afford her since she has become famous and “more demanding on organizers.” Her remarks were met with outrage from Egyptian artists, poets, singers and many social media activists, and she eventually apologized, saying it was her “Lebanese accent” that caused the misunderstanding.

Despite Fares' backpedaling, economic conditions indeed do come into play. Mohamed Mosaad, former coordinator of Egyptian TV Nights, told Al-Monitor deteriorating economic conditions and high inflation in recent years has indeed played a role in being unsuccessful in getting regional celebrities to Egypt.

“The prices of air tickets and hotel accommodations have risen, and it has become expensive for party operators to book flights and accommodations for Arab artists in Egypt,” Mosaad said. “With the high cost of living, many Egyptians minimize spending on luxuries, including concerts. Therefore, operators have become unsure about whether they can collect the money they will spend on flights and accommodations for Arab artists in Egypt through concert revenues and ticket sales — whether for a private concert or a festival,” he added.

But Tarek el-Shennawy, film critic and member of the Higher Committee for Festivals of the Egyptian Ministry of Culture, disagreed. He told Al-Monitor the Egyptian audience is still the most important audience for stars in the region.

The Egyptian public is responsible for the majority of album sales for regional stars such as Elissa, Asalah, Julia Boutros, Wael Jassar, Kadim Al-Sahir and others, while the decline in the presence of Arab singers in Egyptian private concerts and festivals is due to poor planning and organization, Shennawy said.

Regarding the decline in the presence of Arab singers at the Citadel Festival, Shennawy said the Citadel — despite the misnomer “international festival” — was “basically a local event” whose main purpose is to attract middle-class and low-income people with the modest ticket price.

“So it isn't possible to bring first-class Arab stars to this festival. But that does not make Egypt unattractive as a whole. The biggest proof that Egypt is still attractive to Arab singers is the success of concerts by [Lebanese singer and artist] Haifa Wehbe and [Tunisian singer] Saber Rebai and others on the North Coast this summer,” he said.

Ibrahim Kamel, an organizer of private parties on the North Coast, said festival organizers also have to reassess the evolving tastes of the audience. “I think the management of official and private festivals needs to incorporate various music genres favored by young people... in festivals or concerts, because the audiences mostly consist of young people,” he told Al-Monitor.

Festivals and private concerts ignore certain genres of music, such as metal and rap, lamented Ibrahim Metallica, an amateur Egyptian player of metal music. “One of the main defects of the Egyptian music market — whether in festivals or private concerts — always falls upon familiar genres, such as Eastern and Western classical and pop, while other genres such as metal and rap are always absent,” he told Al-Monitor.