Taxing use of Egypt's beaches stirs wave of controversy

Egypt announced a plan to impose a tax fee on resorts and tourist facilities on public beaches, stirring controversy. 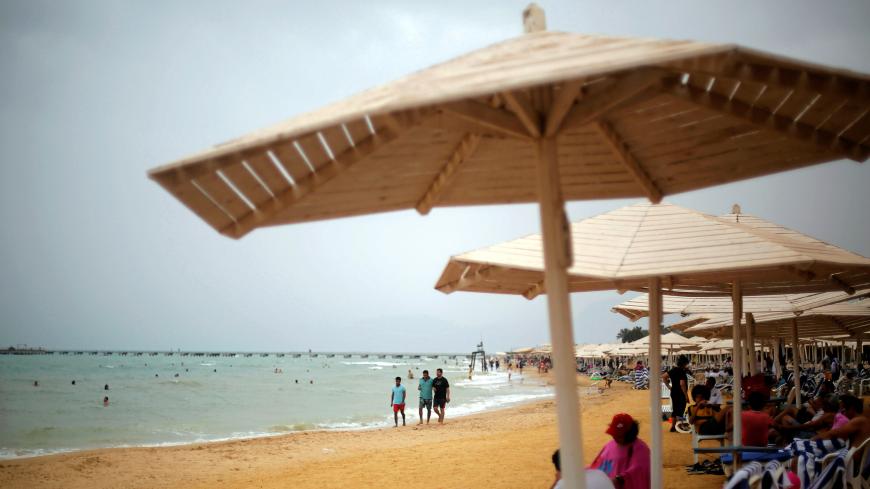 People on a beach at the Red Sea resort of El Ain El Sokhna, Cairo, Egypt, May 7, 2018. - REUTERS/Amr Abdallah Dalsh

The Egyptian government is mulling over imposing new taxes for the use of beaches on the grounds that they are considered public property and not owned by tourist villages, a matter that has sparked a public row over the legality of such decision, as well as the mechanisms of its implementation.

Prime Minister Mustafa Madbouly decided Sept. 4 to form a legal committee to review the possibility and legality of collecting taxes in return for using beaches. The committee is to include Cabinet advisers along with representatives of the Ministry of Local Development, concerned governorates and the Egyptian Tourism Authority.

On Sept. 6, Cabinet spokesman Nader Saad said in an interview with MBC Masr TV that the committee will thoroughly investigate this issue. In case the committee affirmed the state's right to collect a beach tax from resorts and tourist villages, the tax value would be determined in addition to who would pay it. “The entire issue is under review right now,” he said.

Meanwhile, the committee has yet to convene.

The controversy over this issue started when the head of Dabaa City, Hassan Abu Taleb, said in August that the Local Development Ministry imposed a tax worth 150 Egyptian pounds ($9) per square meter for using beaches in Marsa Matrouh governorate, which is located on Egypt's northern coast. A few days later, on Aug. 23, Abu Taleb was fired from his job by Marsa Matrouh Gov. Magdy el-Gharably for spreading false and baseless information.

This row then extended to parliament.

In a quick response, parliament member Dalia Youssef submitted Sept. 1 a motion to the prime minister along with the ministers of tourism and local development, stressing that this tax has no legal basis.

“I have received numerous complaints from the owners of tourist villages, who say the decision is unfair and who do not respect the contracts signed between the state and the investors,” Youssef, who is a member of the parliamentary Foreign Affairs Committee, told Al-Monitor.

According to the anticipated tax decision, millions of pounds will be collected from resorts' owners, Youssef said, adding that such crucial decisions should not be taken suddenly.

“This decision will harm tourist investment. From the very beginning the contracts include the owners' rights to use the beaches and that's why the prices of lands overlooking beaches are very high. The unilateral amendment of the contract by imposing new fees is absolutely illegal,” she argued.

Meanwhile, Youssef stressed that the state has the right to make the best use of its resources and develop them to enhance income sources. Such taxes can be used by the governorate to implement development projects, upgrade its infrastructure and clean its streets, she said.

She added, “But this should be in adherence to the provisions of the law.”

Commenting on this issue, Ahmed el-Segeny, head of the parliamentary Local Administration Committee, said that the government has full right to collect such taxes. “There is a sharp difference between exploitation and ownership. When the state signed a contract with the investor or the owner, it gave him the right to exploit and use the beach, not the right to own it,” Segeny said in an interview with Sada el-Balad TV channel Sept. 2.

“When you use and benefit from a certain resource, you have to pay for this on an annual basis,” Segeny added. “Therefore, the legal committee will review the whole issue and further clarify the mechanisms of collecting these taxes if they are approved.”

Segeny noted that each contract has its own terms and conditions. “So in case of enforcing such taxes, each contract will be reviewed so not to disadvantage anyone,” he added.

The Egyptian shores stretch 1,941 kilometers (1,206 miles) along the Red Sea, while the length of its shores along the Mediterranean is 995 kilometers (618 miles).

Ahmed Ali, owner of a chalet in Marsa Matrouh, told Al-Monitor that a beach tax would harm citizens, not the state or investors.

“Will this tax be applied retroactively? Will it also be imposed on the shores of the Nile and lakes? Will it be imposed on residential places overlooking the sea and the Nile as well? So many unanswered questions,” Ali continued.

In case the committee agrees to impose this tax, beachgoers will also bear the brunt of this tax as entrance fees will go up. “Beaches are our only option to recharge our batteries. I fear that even this option will not be affordable in the near future,” he concluded.