Can a dish and a tale help Syria's internally displaced integrate?

Displaced women from different parts of Syria build bridges with the locals in Atareb by cooking and talking. 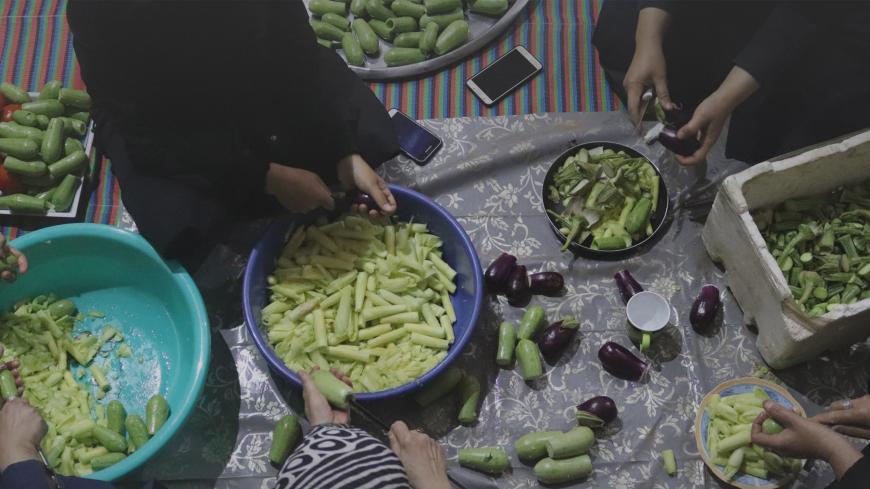 Women prepare food for “A Dish and a Tale” sessions, where they get the opportunity to share stories and meet local women. Posted July 27, 2019. - Facebook/volunteer.to.build

“Women of Aleppo had been strong, independent and right next to their man — particularly in the Syrian revolution,” said Umm Karamwa as she stuffed zucchini with minced meat and rice.

“Aleppo women played a vital role in the revolution, alongside men. They worked in nursing and tended to the wounded from the Free Syrian Army (FSA). They participated in demonstrations and in civil, relief and educational activities under the banner of the Syrian revolution,” she told 20 women, all of whom are part of a project that aims to integrate internally displaced women into their new surroundings in Atareb, a town in the western Aleppo countryside.

Born and raised in the neighborhoods of eastern Aleppo, Umm Karamwa, a housewife, was forced to move to Atareb in 2016 when the regime forces took over their area, which prompted thousands of pro-opposition civilians to leave their homes for the Aleppo countryside, under control of the FSA. She has been living in Atareb, 25 kilometers (16 miles) west of her city, since 2016.

Umm Karamwa then knowledgeably spoke, with some nostalgia, to the women about Aleppo’s rich heritage including the Citadel to the covered market and other aspects of Aleppo's archaeological heritage. Some of the women were locals; others were displaced from different governorates.

All participants tell their stories — often a mix of their personal lives, heritages and beliefs — in “A Dish and A Tale” sessions, which aims to integrate the newcomers with local women. The speaker often starts with an introduction then talks about all the things that interest her, from the role of women in the Syrian revolution to the traditions she grew up with. The displaced women have touching stories to tell on how they felt when they left behind their homes, such as what they could have taken with them and what they left behind. Others listen and ask questions.

After or during the “tale,” each woman shows others how to make a special dish, which they eat together afterward. Umm Karamwa’s session was the second gathering of “A Dish and a Tale,” and she decided to cook stuffed zucchini (al-mahashi).

“To talk and cook is a wonderful idea,” she told Al-Monitor. “I got to make new friends and learn about different cultures in Syria. While I made al-mahashi, the others helped me to stuff zucchini with rice and meat. I found out we make stuffed zucchini differently from the women of Damascus and Homs. We add a lot of spices, while they just add mint to the stuffing."

In the first session, held July 20, the speaker had been Umm Mohammad, a 50-year old housewife who lived with her grandchildren. They all came from Homs.

“I was very happy to be part of this initiative. I had the chance to meet women from different Syrian governorates and we shared our concerns of displacement and the suffering we went through. I told them about our social customs in Homs, the way we make grilled kibbeh [meat patties], which is one of our specialties. They really liked it,” Umm Muhammad told Al-Monitor.

Lina Mustafa, coordinator of the initiative, told Al-Monitor how food and conversation have built bridges among the women. “First, women introduce themselves and talk about their hometowns and their work. They also discuss the role of women in the Syrian revolution, their participation in the demonstrations, raising banners and other activities in their areas before they had been forcibly displaced.”

“During the first session, Umm Mohammad talked about Homs — Syria’s third-largest city and a key battleground. Homs was dubbed “the capital of revolution” in the uprising against President Bashar al-Assad. She showed the onset of the demonstrations against a backdrop of a slideshow showing photos and videos during the revolution in the squares of Homs, with a focus on women’s roles in helping the peaceful, wounded protesters. The photos depicted some of the customs and traditions in Homs, the city’s archaeological sites, and the famous dishes and ingredients. The attendees then joined Umm Mohammad in the preparation of grilled kibbeh (meat patties), and then [they all] lunched together,” Mustafa said.

Muhammad Shakrdy, director of the Atareb Civil Center, told Al-Monitor the "Volunteer to Build” team launched the initiative. “This social activity also seeks to help displaced women cope with the bitter reality of being away from their homes and adapt to a new social milieu,” he said.

“The idea of the initiative came up as displaced Syrians from different governorates flocked into the FSA-controlled areas in northern Syria, particularly in the countryside of Aleppo and Idlib. We had to find a way to help women integrate into the hosting communities. We also wanted to challenge any stereotypes held by the locals in Atareb in the western Aleppo countryside vis-a-vis the displaced,” he added.

“Twenty different women attend every session. They include both local and displaced women. A woman tells the story, customs and history of her hometown with a focus on the role of women in the revolution against the Syrian regime in every gathering. The meeting also includes a Q&A session. At the end, the attendees cook a meal, which would be the specialty of a Syrian town or village. We already held two sessions, one on the city of Aleppo and the other on the city of Homs. In the upcoming sessions, the attendees will talk about Damascus, Deir ez-Zor and Raqqa,” Shakrdy said.

Hanan Orabi, director of the Office for Women and Child Welfare, a division of the Council of Free Aleppo Governorate, told Al-Monitor she was also a guest in the initiative. “The idea is wonderful and aims to strengthen ties between locals and displaced women; [it] brings hope into the hearts of families who are still feeling homesick,” she said.

Another invitee, social activist Asmaa Mohammed, agreed that the combination of food and conversation worked and could be a model for other towns that host displaced people. “This kind of initiative is very important for social integration in the hosting communities. Other towns in the Aleppo countryside should follow suit to help the displaced families feel more welcome in their new communities,” she told Al-Monitor.