A group of Syrian women refugees have opened a catering service in Cairo to make ends meet, and Egyptians are relishing their efforts. 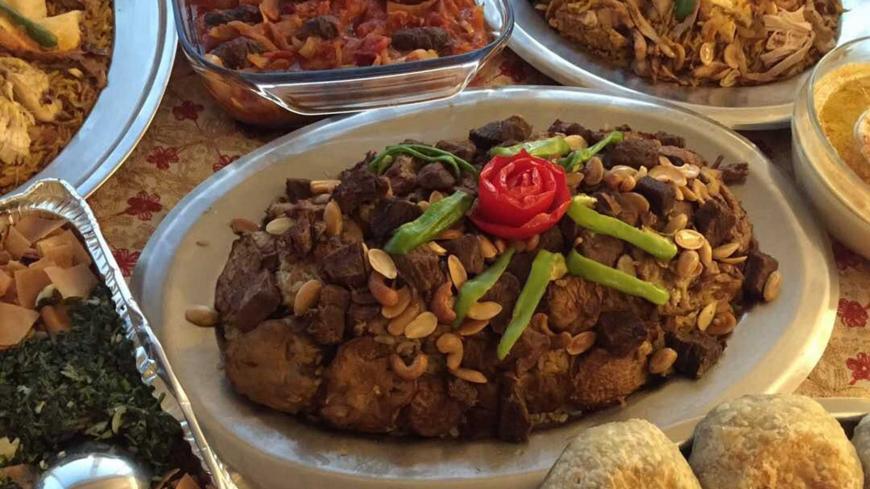 CAIRO — It didn’t take long for some Syrian refugees to find their niches in Egypt. Eleven Syrian women are cooking the recipes from their grandmothers, and Egyptians are eating it up.

Since the Syrian civil war began in 2011, millions of Syrians have left for neighboring countries. Most of them now live in Turkey, Lebanon and Jordan, while some have fled to Europe. Tareq al-Koni, the assistant to the Egyptian foreign minister for Arab affairs, told Al-Monitor that the number of Syrian refugees registered in the Office of Refugee Affairs in Egypt increased from 115,000 in 2016 to 120,000 by mid-2017. According to the latest data issued by the UNHCR on July 31, the number of Syrian women registered with the organization make up 48.8% of a total 122,203 Syrian refugees in Egypt. This figure also includes some 52,000 children who receive help from the Egyptian government.

Zeit Zeitoun, located east of Cairo, serves Syrian meals for home delivery. Their food quickly gained popularity in Cairo, and after its 2016 launch, the project became a way to employ Syrian women, especially widows and divorcees, while preserving their Syrian heritage.

Meals are prepared in the early morning. Women meet in the kitchen to bake pastries and do prep work. They receive from two to 10 orders per day 48 hours in advance, with prices starting at 400 Egyptian pounds ($23) for 10 meals. They deliver the orders to customers in plastic boxes.

The Facebook page for the project reads, “Traditional Syrian recipes come to life under the expert hands of a group of Syrian women living in Egypt. A mouthwatering mix of colors and flavors brings Syria to Cairo, in a festival of fresh ingredients carefully picked to ensure consistently exquisite dishes, excellent taste and strict hygiene. This is the kind of food you would get if you visited a home in Damascus, Aleppo, Homs or Latakia.”

Founder Tamara Rifai, a Syrian human rights lawyer and former regional director for media affairs and human rights advocacy in the Middle East and North Africa for Human Rights Watch, looked for a way to empower these women. Rifai told Al-Monitor how the project started. “The idea of ​​the project saw the light when I visited the Souriyat Association in Cairo and met the women there. I got the idea of opening a commercial kitchen and employing Syrian ladies living in Cairo.”

The Souriyat Association seeks to empower women, help them find a livelihood to provide for their families and promote a culture of human rights.

Rifai continued, “We started to prepare recipes with precise ingredients, and it took us a month or a little more to taste the food and set the exact criteria. Each woman has her own way of cooking and her own way of finding quick solutions. We had to make sure the same taste is produced every time without any difference or ​​surprises.”

Rifai, who fled Damascus for Cairo after the Syrian revolution began, has worked in the field of humanitarian aid since her arrival in Cairo. She worked with Syrian Lina Shaker, the executive director of the project, to establish Zeit Zeitoun, helping raise 25,000 Egyptian pounds ($1,418) to rent a small house and buy the necessary equipment.

Shaker and other Syrian women had already started preparing food in their own houses and were promoting their meals for delivery. Shaker catered big Syrian and Egyptian concerts to great success. She met with Rifai at one of the birthday parties she was catering, and they developed the project until they rented a house where more than 11 Syrian women cook together.

Shaker explained to Al-Monitor that the cost of living has become intolerable amid Egypt’s soaring prices of basic goods. “Priority is given to women who have lost their husbands or to mothers who provide for their families. Each woman cooks dishes she excels at. … While one would be dedicated to preparing salads such as fattoush and tabbouleh, among others, another would bake pastries.” Another group specializes in small dishes like zucchini, eggplants or grape leaves stuffed with minced meat, tomatoes, onions and other ingredients.

The project also provides them with a system of social support, according to Shaker.

Shaker explained that the profits cover the rent for the house where they prepare the food; the gas, electricity and water bills; the ingredients, which keep increasing in price; maintenance expenses; and delivery service expenses. The rest is equally distributed to the women.

When the Egyptian Foreign Ministry announced its local report on the Regional Refugee and Resilience Plan 2017-2018 in April, Koni stated, “The Egyptian government provides full and almost free public services to Syrian refugees, just like Egyptians, and they receive the same services in the fields of health, education and higher education.” With initiatives like Zeit Zeitoun, this population promises to make Egypt's investment pay off.